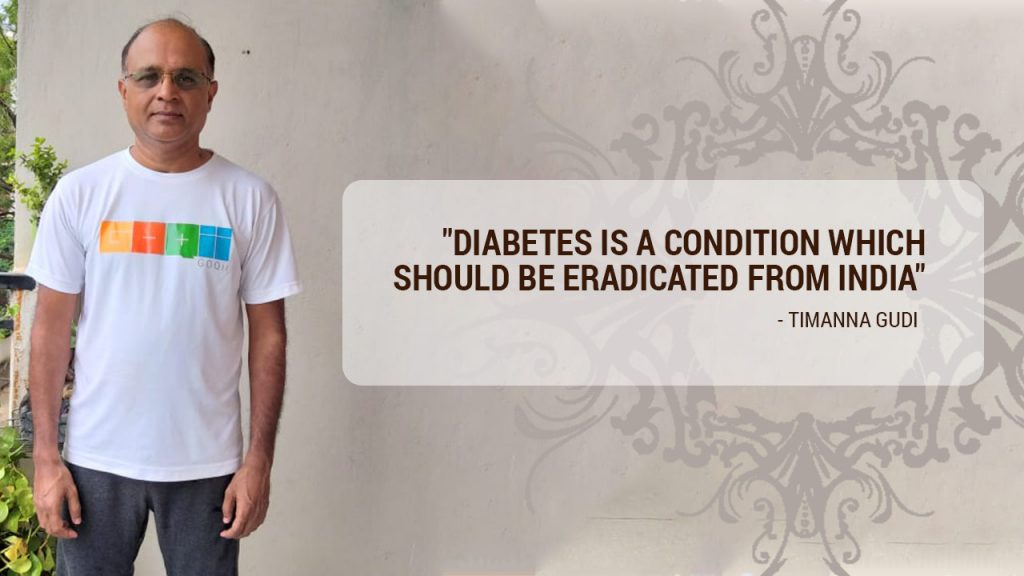 Access to medication is easy! We live in a day and age where even a sneeze can be seen as a good enough reason to swallow a pill. The number of those pills only increase with time as health deteriorates. The more pills you swallow, the more you realize that they aren’t working. Without intervention, without data or without trying, you never realize that a pill is not the answer, it is your lifestyle! In the face of adversity, change is imperative. Here’s how 49 yr old Timanna Gudi made a positive U-turn!

Hailing from Hubli, Karnataka, this mechanical engineer by qualification worked with an MNC as a managing director. His job responsibilities and efforts placed immense stress on his wellbeing. Realizing this, he knew he had to quit. He did so 5 years back and started his own business. However, this did not change anything and his health problems continued.

In 2008, Timanna Gudi was diagnosed with Diabetes. This was just one part of his struggle. Along with diabetes, he had to face hypertension and high cholesterol as well! He was immediately put on medication and with every visit to the doctor, his dosage only seemed to increase. He would have to get tests and visit the doctor every 3 months while his doctor only increased the number of medicines. With no concrete solution in sight, Timanna was only confused.

He happened to come across a talk by B M Hedge, Dean of Manipal Medical College and a renowned doctor. He said that people shouldn’t be visiting doctors for lifestyle diseases like diabetes and cholesterol. The medicines they need are available in their kitchens. Of course, medical assistance is required in case of an emergency but it must be supplemented by a healthy lifestyle. This got Timanna thinking…

He had lost his Dad and his elder sister to diabetes in spite of them being on heavy medications like him. He told himself that if his condition is a disorder, there should be a way to bring it in order! This very thought became the turning point which would pivot his life to balance and wellbeing.

He came to Pune  in 2011 and joined a therapy called Freedom from Diabetes. He managed to get rid of all his medicines in a matter of 40 days through diet control and some light exercise. From then on, he began advocating his approach to everyone who was affected by the same medical condition as his. He gave them hope that they too could change!

Joining GOQii and Being the Force

In 2018, he bought some equipment to perform exercises at home. He followed YouTube channels and performed his routine accordingly. However, he ended up with a frozen shoulder due to an incorrect position. This kept him from exercising for about 8-9 months.

In March 2019, a friend introduced him to GOQii. He was intrigued with the idea of coaches demonstrating exercises LIVE on the app. The GOQii app solved two of his needs i.e. exercise and nutrition. He was getting expert advice from topics relating to a healthy diet, lifestyle, meditation and so on. He saw GOQii as an opportunity to get back into routine!

He joined during the India Steps Challenge and began competing, clocking in 6000 steps a day. He initially started with basic walking and increased his target to 12,000 steps after he invited a few of his friends. Due to walking too much, he began losing a lot of weight and was underweight by 7kg. He was asked to stop walking and jogging completely. To keep the momentum of his physical activity going, he began strength training in order to build muscle mass.

He is a regular on GOQii Play. He watches Coach Tufail Qureshi, Coach Alistrair Fernandes and Coach Shweta Kariya, following the workout routines demonstrated by them on a daily basis. As his work requires him to travel often, he carries a resistance band in his luggage as suggested by Play Coaches. He feels that a resistance band is a handy equipment that can be used to target any body part!

Being lactose intolerant, he shifted to a vegan diet. This essentially means that he avoids milk, curd and cheese. He avoids processed foods like bread, biscuits, etc. He begins his day with a glass of green smoothie which is a wholesome blend of raw Spinach (Palak) or any other leafy vegetable coupled with Betel leaf, Pudina (Mint), Tulsi (Holy Basil), Curry Leaves, Cinnamon Powder, Black Pepper and one fruit along with soaked nuts and seeds.

He follows this up with 45mins to an hour of exercise. His breakfast is more protein-based which includes a dal-based Cheela or sprouts and salad. In between meals, he grabs a spoonful of any seeds or a cup of green tea. His Lunch includes a Roti, one bowl each of dal, vegetable and raw salad. He also drinks Apple Cider Vinegar, which he believes has helped in keeping his body more alkaline. His family mostly uses cold pressed virgin coconut oil instead of refined oil.

Opting For Natural Methods Instead of Medicines

Timanna Gudi reiterates that commitment is absolutely necessary. There is no way you can cheat or give in to temptations. He strongly believes that Diabetes is a medical condition which should be eradicated from India.

He says, “The medicines never stop and you just keep losing your vital organs to it slowly. However, everybody is different and not all solutions suit everyone. You need to go test and try before settling down with what suits you.”

He in fact, also got rid of his Acute Bronchitis, something which he suffered from since childhood which required him to use inhalers. He did so by practicing Pranayama (You too can reap the benefits of this wonderful practice. Here are 6 Variations of Pranayama and their Benefits)

In the course of his time fighting diabetes, he has also helped his younger brother reduce his sugar levels. He feels it is his duty to share the knowledge he has gained from his experience combating lifestyle disorders.

Timanna feels GOQii is a fantastic platform with lot of resources that can benefit anyone and everyone. He regularly shops on the GOQii Health Store and advocates the fact that you get good options at competitive rates.

We wish Timanna Gudi the best for his journey. If this story inspired you or if you are fighting your own uphill battle against a lifestyle disease, share your thoughts in the comments below! To help you manage diabetes effectively, reach out to our experts by subscribing for GOQii’s Diabetes Care Program here: https://store.goqii.com/diabetescare

We’ve always advocated that lifestyle diseases can be managed with a balanced, healthy and holistic lifestyle but can they also help you manage a terminal condition? Our Player Ananda Mukherjee, with help from his GOQii Coach, was able to battle such a … END_OF_DOCUMENT_TOKEN_TO_BE_REPLACED