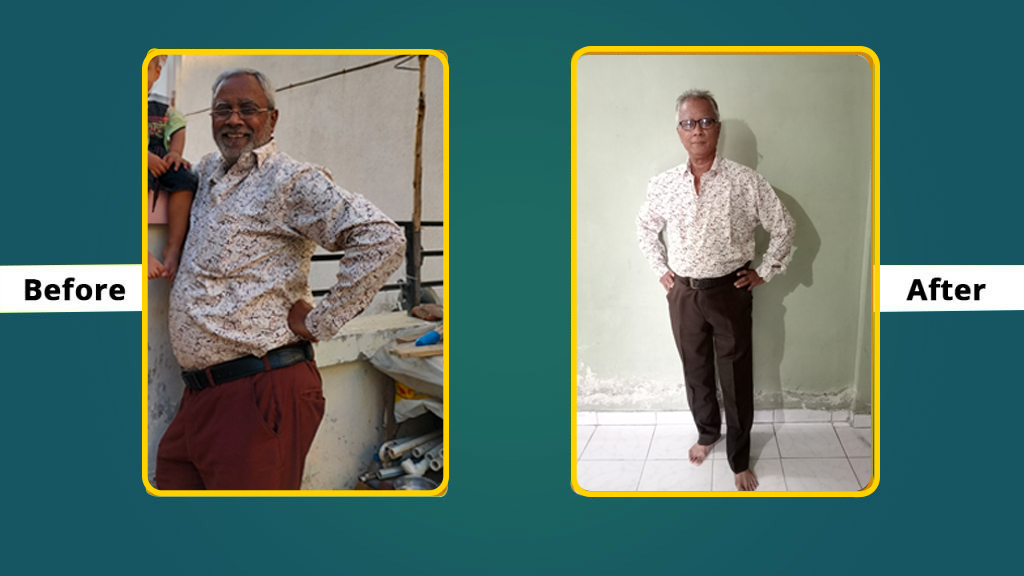 Often, managing just one condition can be an insurmountable task. Imagine working your whole life, while your physical, mental and emotional health just spiral downward, while the number of pills you take keep increasing. Our Player Yogesh Shah was in such a predicament where he was dealing with multiple illnesses but managed to overcome them with help from his GOQii Coach Deepali Sharma. Here’s how Yogesh Shah wrote his own Health Story.

Based in Ahmedabad’s Mani Nagar, Yogesh Shah is a 63 year old retired Government Employee. He said that he had a hectic schedule. “There were times when I would work from 7am to 11pm, never even having the sun’s rays hitting my body for years,” he said.

Erratic work hours led to bad eating habits, disturbed sleep and high levels of acidity as he consumed a lot of tea. Yogesh Shah told us that this was his routine for 36 years of his work life. While he was extremely dedicated and diligent towards his work, it took a toll on his health. He suffered from multiple issues which included weight gain, diabetes, hypertension, disturbed lipid profile, chronic stress, bipolar disorder, gastric trouble, anxiety (8-10 attacks a month), palpitations and cervical pain due to a surgery he had 4 years back.

Till 2021, he used to pop 18 tablets daily. Around Dec 2020, he was consuming 26 tablets which included medication for COVID. Despite the issues, he was positive and did not let his conditions damper his way of life.

“I realized I was not doing the right things and that this was taking a toll on my health but, I did not do anything about it,” says Yogesh Shah. The health issues started around 1992 and aggravated in 10 years. His family was worried and felt helpless about not knowing what they could do to help him.

He wanted to get better, reduce weight and control his illnesses but was not sure how to go about it. Then, just before retirement, he got to know about GOQii from two young women in his office. They motivated him to go for it. Yogesh Shah purchased GOQII from Amazon in Oct 2021. Initially, he found it difficult to decipher and understand GOQii but, slowly and steadily he was able to understand how the platform works.

He followed all the instructions given to him by his Coach Deepali Sharma. She introduced small changes which had a big impact. Over the course of time, he has been able to improve his health and control his illnesses. He says, “Initially I could not understand my coach but then slowly, I started understanding. Some of the changes she brought about made quite a difference.”

His daily routine begins with praying, then gardening in his little kitchen garden. He follows this up with morning meditation for which he follows Coach Rounak Gajjar on GOQii Play. He also follows Coach Sheetal Tewari and Coack Bhumika Unniyal for yoga, meditation and pranayama.

Currently, he walks about 15km on most days whereas before, he would feel breathless even after 1km. On the International Day of Yoga on June 21, he walked 21km. He says that he now wants to participate in the GOQii Trail Challenge 2022.

“Coach Deepali has given me a lot of habits and I follow them religiously. Hence, I have been able to make a change!” he says.

What Are The Results Of Yogesh Shah’s Efforts?

“Nothing will work unless you do. You need to work hard to achieve your goal. This is something which my Player Yogesh Shah has proven with flying colours,” says Coach Deepali Sharma. “Initially, he had multiple issues like weight gain, uncontrolled sugar levels, disturbed lipid profile, chronic stress, bipolar disorder, gastric trouble, anxiety and palpitations.

He used to feel tired after a kilometer walk and now, he is on 21km, which is equivalent to a half marathon. His HbA1c came down from 8% to 6% with almost controlled Fasting blood sugar. Episodes of anxiety dropped drastically from 10-12 episodes to almost nil now. Symptoms like shivering, headache, restlessness are completely out of our book, which were quite prominent before,” she says.

“It’s not stress that kills us but it is our reaction to it and Mr. Yogesh was outstanding in cultivating that positivity with intrinsic motivation. Stress was affecting his sleep a lot. With hard work and determination, he is now out of his anxiety medicines. We worked on setting a sleep-wake cycle as well and relaxation exercises also helped us a lot. I have seen an incredible improvement in his sleep from 2-3 hrs to an average of 5-6 hrs as of now. He is a person with a clear vision and that’s the reason we lost good weight. He is 71.25kg (latest) which was  82 kg when we started. This was achieved by keeping post sunset meals light, adding healthy snacks and carb control,” says Coach Deepali Sharma.

As of now, Yogesh Shah’s medication has been reduced to 13 pills. You can view Yogesh’s entire journey as he speaks to our Founder & CEO Vishal Gondal on an episode of GOQii Health Stories.

Do you suffer from similar conditions? Did this story inspire you to make a lifestyle change? Then reach out to a GOQii Coach and subscribe for personalized health coaching here: https://goqiiapp.page.link/bsr 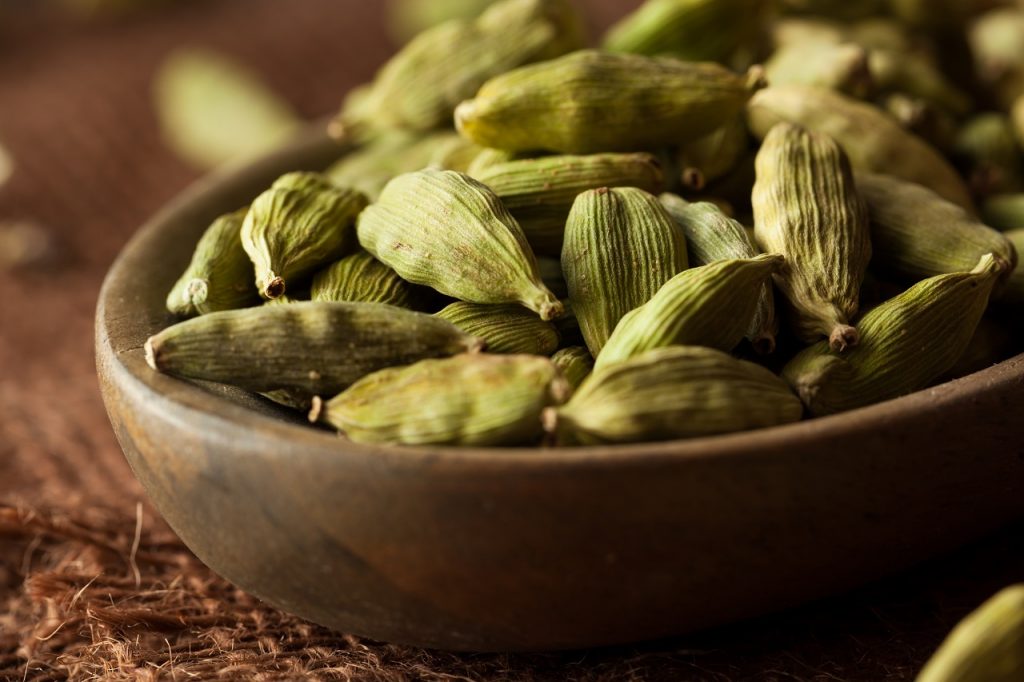 Cardamom, also known as the ‘Queen of Spices’, is a strong aromatic spice used in some traditional recipes in India and also some exotic dishes. This is not only used in cooking, but also has therapeutic value. This green pod is commonly grown in the mountainous regions of India and some countries in Asia. It usually comes in 2 varieties, Green (used for sweets and desserts) and Black (used for preparing garam masala). This minty, earthy spice is commonly known as ‘Elaichi” in North India and ‘Yelakki” in South India.

It is consumed in the following forms:

How Does Cardamom Help Fight Against Hypertension?

There are many studies conducted so far that have suggested that Cardamom supplementation will help in controlling blood pressure.

How Can You Incorporate It In Your Food?

Cardamom is very versatile. It is usually added in teas, milk, milkshakes, deserts and is also used as a mouth freshener. The calorific content, fat percentage of the foods should be taken into account while including it for reducing blood pressure. (You may consult your GOQii Coach for it).

Some other methods that can be used to control blood pressure using Cardamom are:

We hope this article helps you! For more on nutrition and controlling lifestyle diseases, check out Healthy Reads. To get these nutrition tips directly from your GOQii Coach, subscribe to personalized health coaching now: https://goqiiapp.page.link/bsr

We’ve always advocated that lifestyle diseases can be managed with a balanced, healthy and holistic lifestyle but can they also help you manage a terminal condition? Our Player Ananda Mukherjee, with help from his GOQii Coach, was able to battle such a … END_OF_DOCUMENT_TOKEN_TO_BE_REPLACED