Many of my players suffer from eye stress and strain due to excessive small screen time. With most of us using computers and cellphones at work, eye strain has become a major health issue. Research has shown that eye strain and stress issues occur in around 70-80% of people using computers at the workplace. Feeling fatigued, mistakes while working, watery eyes, twitching, and redness in eyes, constant headache, and irritability are some common issues that people face due to eye strain. It’s a growing need to cope with and manage eye stress and strain.

1. Adjust Lighting
Many times we tend to ignore the light arrangement while working for long hours. The bright light from windows or sharp interior lighting can cause major eye stress.  One should position the computer screen in a manner that the windows are to the side, instead of in front or behind it. Try to block excess lighting from outside by using curtains. Reduce sharp interior light by reducing the number of light sources or by using warm light tone bulbs/tubes. Halogen lights are better than overhead fluorescent lights.

2. Reduce Glare On The Screen
Excessive glare on the screen which might go unnoticed is another cause of getting headaches while working on screens. There are different gadgets available to help reduce this strain:

3. Adjust Your Display Settings
Adjusting the display settings like brightness, text size, contrast, the color temperature of your computer can help reduce eye strain and fatigue. Generally, these adjustments are beneficial:

4. Take Frequent Breaks
Try to take 5-10 minute breaks every 2 hours to reduce the feeling of fatigue. Take a stroll, look away from the screen and splash your eyes with cold water. During your computer breaks, stand up, move about and stretch your arms, legs, back, neck and shoulders to reduce tension and muscle fatigue. Use cold green tea (used) bags for relieving puffiness around your eyes. (Keep used green tea bags in the refrigerator- and put them over your eyes- covering the under eye area as well) rest for 20 minutes and remove.

5. Blink Often
Blinking keeps your eyes from drying out. Constant gazing at screen reduces blinking by 30-40%. Hence, the eyes feel dry and strained. Every 20 minutes, blink 10 times by closing your eyes as if falling asleep (very slowly). This will keep your eyes from drying out. If eyes feel strained post blinking, rub palms together and apply a warm compress to the twitching eye and gently massage the eyelid with your fingers.

6. Exercise Your Eyes
Eye exercises can greatly help in improving eyesight and is a must for people having long screen hours to avoid developing eye issues.

I am sure these suggestions will help you avoid and manage eye stress and strain. Having a routine eye exam is a must if you have more than 3-4 hrs of screen time every day.

We hope this article helps you stay healthy at your workplace. Do leave your thoughts in the comments below! For more health and lifestyle tips, check out Healthy Reads or speak to an expert by subscribing for Personalised Health Coaching here: https://goqiiapp.page.link/bsr 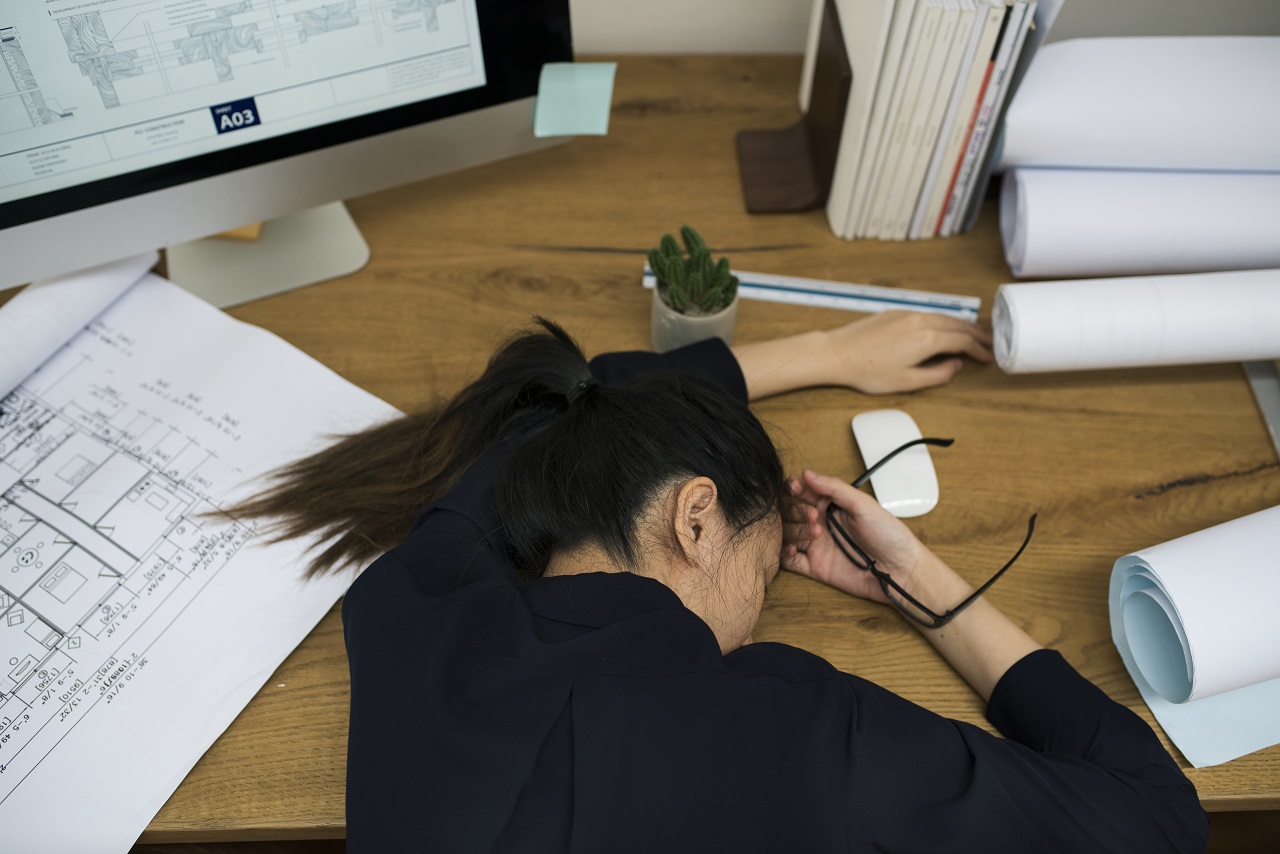 I was quite shocked to find that every 1 out of 5 of my clients was suffering from stress. After digging a little deeper, I found that the root of their problems, the most common factor causing stress was Expectation!

Any form of expectation that isn’t fulfilled turns into a negative thought process that can either cause stress or depression. Be it a job, a boss, colleagues, family or friends, any expectation can sometimes lead to disappointment. It isn’t necessary that we get all the symptoms of depression every time. If something constantly hurts you or stops you from thinking anything else, you are stressed!

If you feel like there is nothing you can do in a stressful situation, here are 7 surefire ways to beat stress!

Which of these 7 ways to beat stress did you like the most? Do you have queries? Share them all in the comments below!

To read more on how to beat stress, check out Healthy Reads or get more tips directly from your GOQii Coach by subscribing for personalized coaching here: https://goqiiapp.page.link/bsr 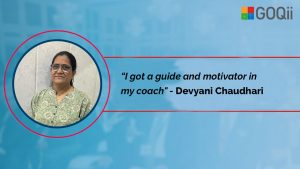 Does work rule over your “me time”? Are deadlines more important to you than the quality of your meals? Are you prioritizing your work over your health? If yes, then you might have a lot in common with our Player Devyani Chaudhari. Like most working folks, she didn’t have a work-life balance and paid for it with her health. After some major health issues, she adopted GOQii and along with her coach made some sustainable changes. Here’s how her Health Story unfolded.

Working Hard But Not Working Out

Based in Dombivli, Devyani Chaudhari, aged 54, worked in the supply chain side of a pharmaceutical company. She would work from 8.30am to 9pm and thanks to this, she wasn’t able to pay much attention to her lifestyle.

This erratic lifestyle was an addition to ongoing personal issues such as stress due to a toxic work environment, her son’s health, loneliness due to her husband’s death – all of which often lead to suicidal thoughts. She would constantly suffer from terrible stomach aches and high stress levels. To add to it, she also faced a disturbed sleep cycle.

While she tried to manage her lifestyle by eating her meals on time and working out, nothing really worked. “My son took it upon himself to try and find a solution for my issues. He did research and found out about GOQii,” says Devyani Chaudhari.

Making Changes That Worked Out

Devyani came on board the GOQii platform on 16th October, 2019. Her initial health goal was to lose weight. But, her coach revised that to ensure she first gets over her acidity issues which were extremely intense. Due to acidity she would throw up frequently and had developed ulcers.

Since she is a working lady, extensive working hours lead to irregular eating patterns and she used to consume a good amount  of junk food too. “Toning the body was always on the agenda,” she says. She tried doing Zumba but due to the high intensity, she could not match up or would end up experiencing some pain.

Devyani was advised to cut down on junk food and instead eat healthy food at regular intervals. Her coach Madhu Soni started with small changes and tried to regularize her meals. Starting with Ajwain, Saunf and Jeera water on an empty stomach, she also asked to take lemon-honey water on alternate days.

Slowly, her meals began to get regularized and intake of junk food reduced considerably. After a few months of opening up and sharing a good rapport with her coach, one day she timidly told Coach Madhu Soni about her urine incontinence. She had been using diapers and feared that her colleague might soon find out.

Based on this, Devyani was advised to do Strength training and then finally walking was her winning strategy which helped her to shed off the excess fat from the body. From 72kg she slowly came to 65kg. Unfortunately, she met with an accident and hurt her ankle and was unable to workout after that. Her weight went back to 77kg. Now, her weight is 75 kg and she is working on reducing it further.

Owing to some of the changes that Devyani Chaudhari made in her lifestyle, her acidity issue is cured completely. Her stress levels have also gone down considerably. The regular intake of Ajwain, Saunf and Jeera water in the morning and reduced stress played an important part in reducing her acidity levels.

Before, she used to take pills quite often for her sleep issues but now, her sleep quality has improved and the frequency of taking pills has also reduced. Her dependency on diapers has stopped as well.

Coach Madhu Soni’s advice on meditation and chanting the Om Mantra has had a positive effect on Devyani. This helped her quit her previous toxic job and take up a new one with positive people around. Devyani Chaudhari credits her change to her coach saying, “I got a guide and motivator in my coach”.

Does this health story inspire you? Do you want to make a sustainable lifestyle change like Devyani? Subscribe for personalised health coaching here to get started now: https://goqiiapp.page.link/bsr 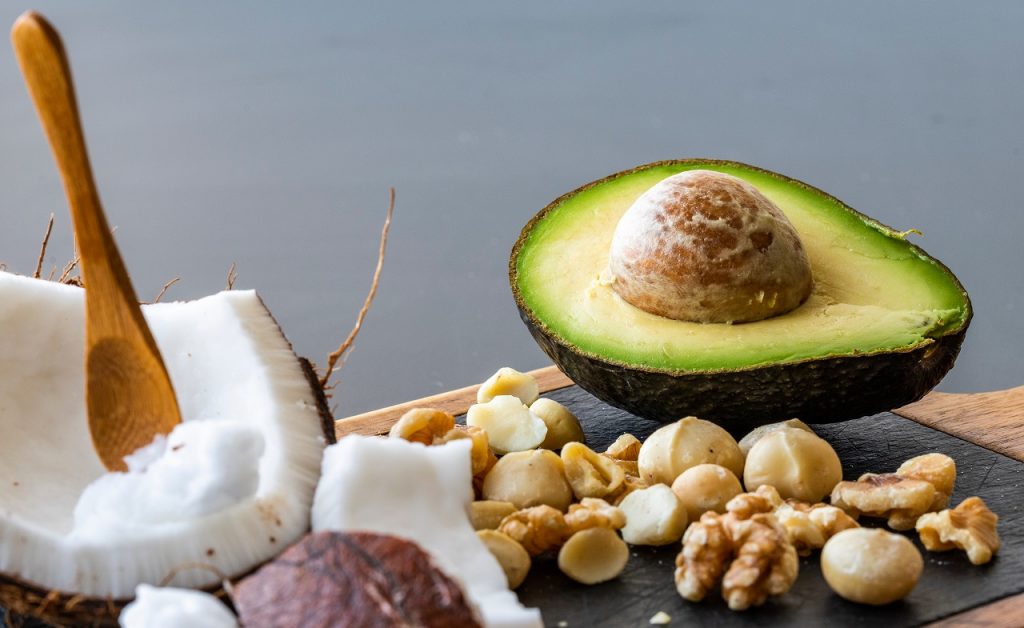 Stress is a part and parcel of life. There’s no escaping it. Everyone endures stress and it is perfectly natural to seek some relief from it. In fact, relief is necessary because prolonged stress can lead to chronic stress which if left untreated, can cause heart-related issues, burn you out and affect your mental and emotional wellbeing. When faced with massive stress, we turn to food but are you eating the right kind of stress busting foods?

Don’t let relief come in the form of junk food. Instead, you can try these healthy stress busting foods:

We hope you will incorporate these stress busting foods to your daily diet. Do you know someone who is perpetually stressed? Share this with them and help them find relief. For more articles on busting stress, check out Healthy Reads. Get these tips directly from your GOQii Coach by subscribing to personalized coaching here: https://goqiiapp.page.link/bsr

You can also purchase some of the above listed foods such as A2 Cow Ghee, Organic Honey, Pumpkin Seeds, Cashew Nuts and Walnuts for a discount using GOQii Cash on the GOQii Health Store within the GOQii App.

Imagine an event where each and every person has a unique tale to tell, despite having taken similar paths or adventures. Have you ever gone through it? We’re about to share the experience of Kamal Chandran, Group Head - HR at GOQii, who participated in the … END_OF_DOCUMENT_TOKEN_TO_BE_REPLACED