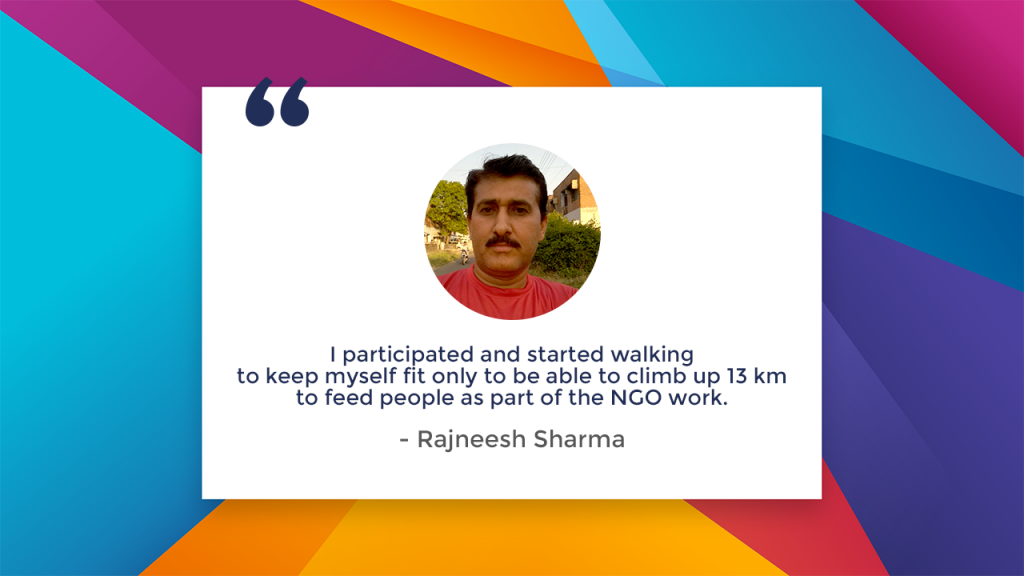 What if you had a chance to win Rs. 5 lakh? How far would you go? What if the odds weren’t completely in your favor? Would you still keep going? When the GOQii India Steps Challenge presented our players with an opportunity to earn rewards for walking, many individuals stepped up to the challenge. But, there were only a few that rose to the top! One of those challengers was Rajneesh Sharma.

Before the GOQii India Steps Challenge

Hailing from a small town in the Pathankot District of Punjab, Rajneesh Sharma works for Ranjit Sagar Dam. His job is sedentary and involves a lot of desk time. He is married with two children.

Apart from his job, he is also associated with an NGO by the name of Shiv Bhole Langar Samiti that engages in providing food and other facilities to the Manimahesh Pilgrims. Manimahesh is situated at an altitude of 12,956 ft and is difficult even for seasoned trekkers. Due to his eagerness to serve people through this NGO, Rajneesh began taking an interest in fitness and physical activities.

Before joining GOQii, he was moderately active, walking sometimes. However, there was no consistency as his job didn’t leave him with much time to walk or indulge in any activity. He considered his diet to be normal as well.

In December 2018, his elder brother motivated him to join GOQii and work towards his health and fitness. As he came on to the platform, the first run that he actively participated in was the GOQii Resolution Run 2019.

Once he had successfully completed the run in January, he got introduced to the GOQii India Steps Challenge in February. When he heard of the Rs. 5 lakh cash reward, he had made up his mind to win it and donate the money to his NGO. Rajneesh Sharma began walking 2 hours in the morning, 2 hours in the evening and even in between as and when time permitted. Thus, he was active for almost 5-6 hours a day during the challenge and was clocking in an average of 39,657 steps daily.

To keep up his stamina, he turned to balance his meals more. As a vegetarian, he had to completely rely on plant protein. He began eating soaked almonds, sunflower and pumpkin seeds and at times sprouts as well before his workout. After his workout, he drank a glass of milk. He mostly ate home-cooked meals for lunch and dinner.

During the course of participating in the challenge, he experienced knee pain. He tackled this issue by doing knee-strengthening exercises and his condition improved.

To walk his way towards the grand prize, Rajneesh sacrificed time with his family for a period of 100 days. He could barely afford any time at all for his wife and children as his entire routine revolved only around walking and work. Although, he had their support. He even found support in 4 of his friends who joined him in his journey and won prizes as well.

By the time the challenge had ended, Rajneesh Sharma noticed that he had lost 4-5kg. His stamina improved tremendously. Before, he used to feel breathless, but now, he can easily walk for hours together without any effort. He says that walking has become an obsession now.

He doesn’t miss his walks under any circumstances. Rajneesh says that the India Steps Challenge has made him more passionate about staying fit and being healthy. His four friends have continued to join him for walks even after the Challenge. They do their best to motivate each other.

Apart from physical fitness, he has also noticed changes in his mental and emotional wellness. He feels really positive throughout the day. There isn’t an ounce of tiredness or stress that chain him down. He has more energy than before which keeps him cheerful and happy.

After putting in so much hard work and dedication, Rajneesh Sharma, his family and friends were all looking forward to see if he had won the challenge. When the grand prize was announced, he got to know that someone else had claimed the first prize.

Everyone who supported Rajneesh and knew his struggles were extremely disappointed. In the spirit of fairness, when an audit was performed, Rajneesh was declared the true winner of the India Steps Challenge. He was happy that his ardent efforts had paid off.

He said, “I am very happy to have won this challenge as I have decided to give this money to an NGO – ‘Shiv Bhole Langar Samiti’ with whom I volunteer. This NGO feeds people in Himachal Pradesh’s Manimahesh pilgrims. I participated and started walking to keep myself fit only to be able to climb up 13 km to feed people as part of the NGO work. Then my friends joined me and that kept me motivated.”

What began as a challenge, became an inspiring story of hard work, dedication and good karma. An initial quest for a reward gave Rajneesh so much more than just Rs. 5 lakh. He was able to discover true wealth in the form of fitness and good health.

We wish him the best in his journey towards being fitter and healthier!

While earning a good livelihood is important, is it taking more life out of living? Long working hours, being seated most of the time with no physical activity and bad eating habits can take a toll on your health over a period of time. If this sounds … END_OF_DOCUMENT_TOKEN_TO_BE_REPLACED