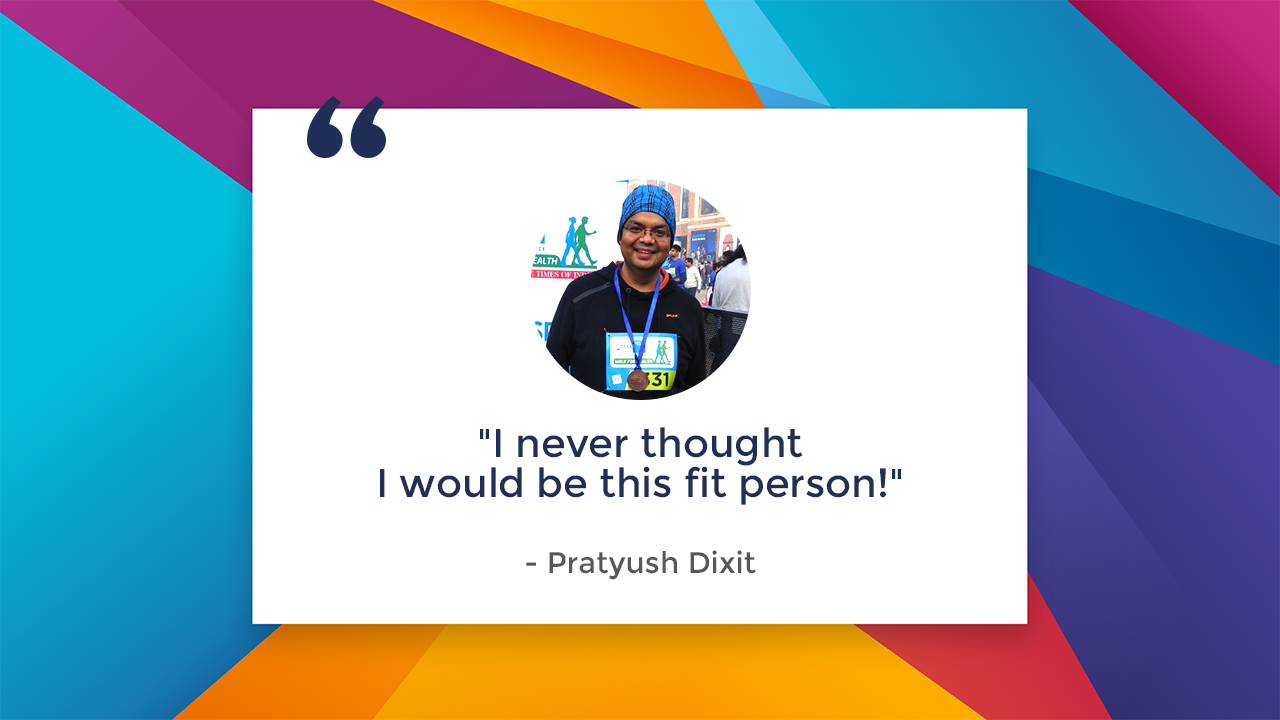 Have you ever been in a situation that felt hopeless? Do you think that your current predicament is irreversible? Have your circumstances chained you down to the extent that you feel you cannot achieve your dreams? If everything around you is crumbling to an inescapable pit of despair, we want to remind you that things can change. You can change. It’s never too late. It’s never too late to reverse your circumstances and achieve your dreams.

If you want to know how this is possible, we want you to read Pratyush Dixit’s inspiring story of reversing the odds!

A marketing professional from Delhi, Pratyush Dixit has been working since 2005. He was leading a sedentary life due to the strenuous nature of his work. Especially for the past 8 years, handling stock provisions, then the hospitality sector and now heading a marketing division, he was always seated and stressed. Apart from being sedentary, Pratyush was also a foodie. He had been winning food eating competitions for as long as he can remember, enjoyed street food and was never into healthy eating. On the medical front, he had a family history of diabetes. At 34, he weighed 105 kg and things weren’t working well for him. He found himself thirsty throughout the day and urinating frequently at night.

Identifying these as the classic symptoms of diabetes, he went for a medical checkup. He was aware that his blood sugar might be high but once his tests came in, he got the shock of his life. His Blood sugar level was at 330 and PP (post prandial sugar after meals) was more than 525 and his cholesterol was extremely high. When he consulted his family doctor, he advised immediate measures to bring the situation under control. He was put on heavy doses of insulin till his sugar dropped to 200. Pratyush knew he had to bring his weight under control as well for him to be able to recover. He immediately took to walking and in 2 months was able to shed 7.5 kg.

At this point, Pratyush Dixit had read extensively about diabetes. He was searching for a fitness tracker that could help him. He came across other bands but eventually settled for GOQii. Initially, he didn’t want the coaching option as he believed he had read enough about diabetes to know everything. After a long conversation with the GOQii Coach assigned to him, he realized that he needs a coach. His Coach was knowledgeable, patient, understanding and motivating. She assured Pratyush that he will achieve his health goals.

Starting slowly, she told Pratyush that he need not rush in one go but should take one step at a time. For instance, when on the phone, he could squeeze in a walk. She encouraged him to eat healthy. Whenever he wanted to eat a pizza, she advised him to not eat more than a few bites. She also advised him to eat smaller portions throughout the day so that he was full and didn’t feel the urge to eat unhealthy.

Changing Habits and Getting On Track!

Pratyush stopped eating unhealthy. Now, he avoids rice completely. His diet involves a lot of protein and complex carbohydrates. On a daily basis, he consumes fruits with cinnamon (as it helps control blood sugar) as well as a couple of teaspoons of apple cider.

In the mornings, he starts his day with Fenugreek and Fenugreek water. Then he goes for one liter of luke warm water with apple cider, lemon, pepper and black salt. Post that some apple and cinnamon. He follows that up with some cold milk with Basil (Sabja) seeds. Later, he eats either Porridge, Oats or Upma loaded with vegetables. He then goes on to eat nuts, some pumpkin seeds, sunflower seeds, pistachios, almonds and/or walnuts.

For lunch, he takes multigrain chapati with one dal or vegetable or both and salads in good quantity. He also has buttermilk twice a day. In the evening, he munches on dehydrated pulses with some salt. He also eats a fruit, mostly pomegranate or pears. He avoids mangoes and pineapples. At night, he again eats a chapati, vegetable and salad. If he must opt for rice, he prefers brown rice.

For exercise, apart from walking, when he gets the time, Pratyush includes bicep and tricep curls as suggested by his Coach. He also manages to do a few pushups and squats. He has started jogging a little as well.

He was bedridden for 6 months because of lower back pain but was able to overcome that and recover. His GOQii Coach helped him with some yoga as well.

“Now I go for healthy street food! Even if I go for the unhealthier one, instead of going for Dalda or ghee, I go for a olive oil tikki and I won’t take more than a bite or two. I avoid whole portions. I have stopped ordering from Dominos or Pizza Hut but opt for Pizza Express where they serve thin or wheat crust. If I’m out, instead of Aloo Tikka, I got for Paneer Tikka or Soya Chaat. Everything without butter. Then I opt for Green Tea regularly as well as Basil Leaves.”

Pratyush told us that he wasn’t worried about his blood sugar levels anymore. He slowly lost weight the healthy way with help from his GOQii Coach. He currently weighs around 80kg. Before, his HPCL was 14 and now, it is a stunning 5.2. His diabetes is completely under control. His PB recently was 95 and fasting was 80, both of which are not sugar levels of a diabetic. With diabetes under control and low cholesterol, he is always high on energy! He says that he is the healthiest person in his office! Recently, his TSH shot up. He is working towards controlling it. On a daily basis, he walks anywhere between 10k to 30k steps. He is a part of the Active Sunday group and every Sunday meets his like-minded GOQiites for some fun walks and exercises. 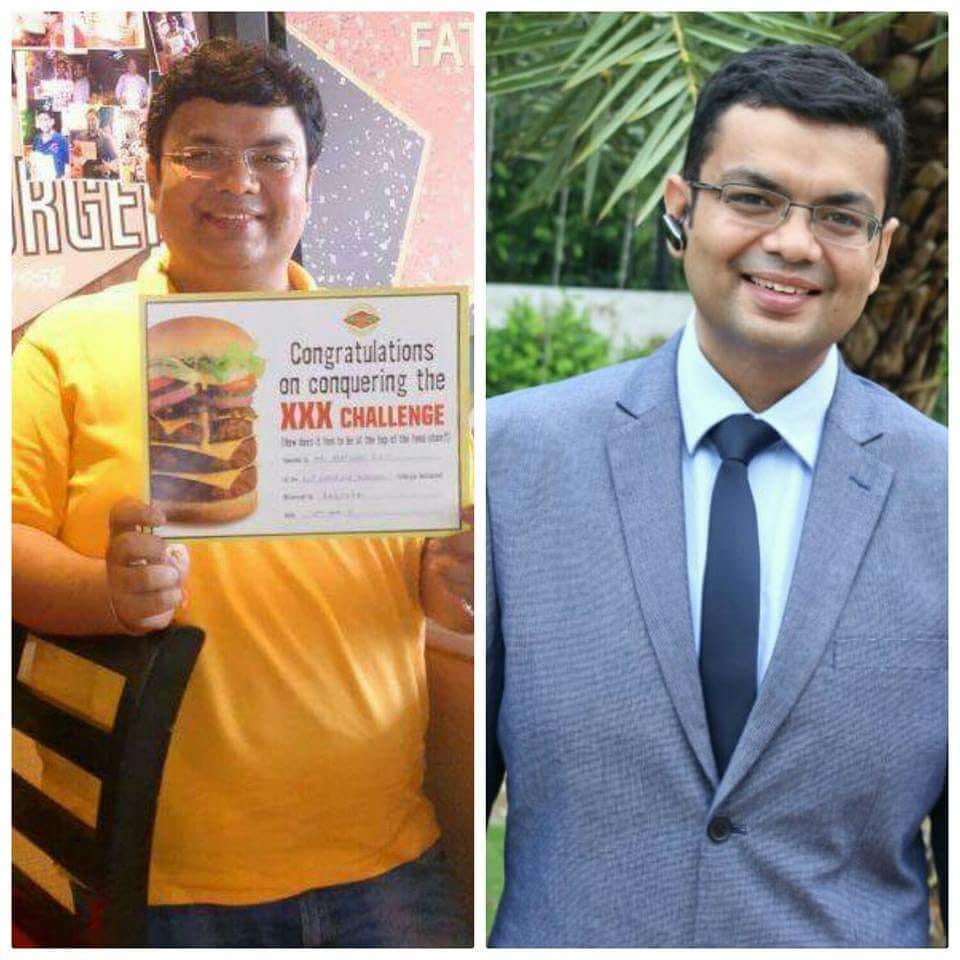 When Asked About GOQii, He Said:

“The best thing about GOQii is that it provides you some learned, educated and dedicated coaches. They are like friends who are helping you out. They are not just carrying that professional approach of ‘you have to do this and my job is done’. There is a lot of personal approach and they keep motivating you. That does not mean they are lenient. They keep pushing you to do better. Sometimes when I miss my walk, my coach tells me that it is okay. You can’t religiously follow your schedule every day. You aren’t a machine. The key is that even if you go off schedule, you should come back. With GOQii, there’s someone to motivate you to come back to that schedule. So that is what GOQii has done to me. When I told my coach of my problems, she assured me that we will overcome them and achieve my goals! I never thought I will be this fit person.”

People in Pratyush’s office consider him as their idol and often approach him for help. Once upon a time, he was fattest man in his society and now he is a role model with people asking him how he did it. He simply responds by saying because he had the zest to do it!

Going forward, Pratyush wishes to push his limits and practice Parkour Running. He is currently working with his coach to achieve this. As it was always his dream, now he feels he can finally achieve it.

What did you think about Pratyush’s journey? Share your thoughts in the comments below!

Imagine an event where each and every person has a unique tale to tell, despite having taken similar paths or adventures. Have you ever gone through it? We’re about to share the experience of Kamal Chandran, Group Head - HR at GOQii, who participated in the … END_OF_DOCUMENT_TOKEN_TO_BE_REPLACED