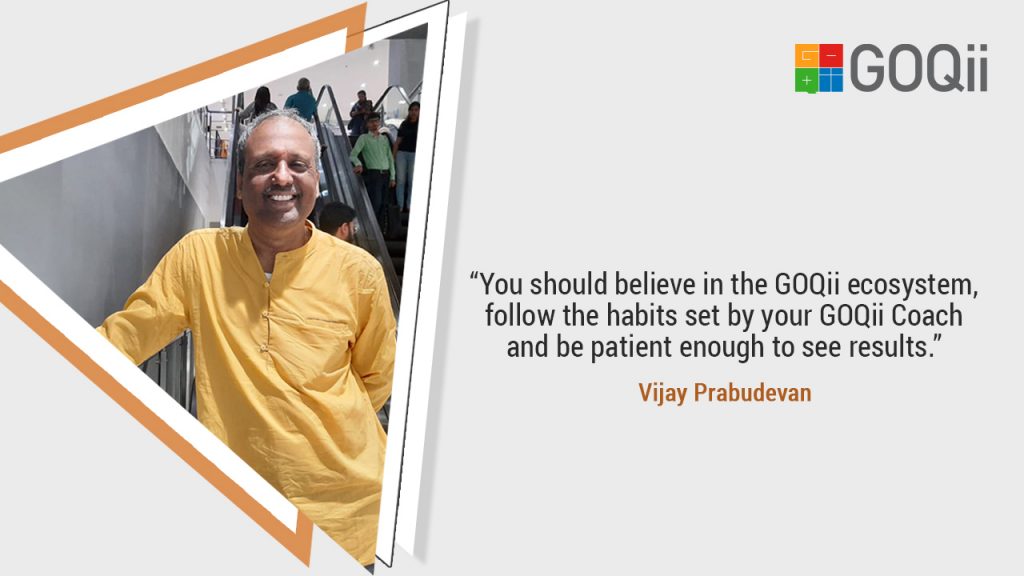 Working towards good health is never a one-off affair. It’s an ongoing journey. As the saying goes, “Being healthy isn’t a race, it’s a marathon” and quite rightly so. In a world where we get everything quickly at the click of a button, we expect the same while recovering our health as well but that is never the case. The key is consistency and patience – qualities that our player Vijay Prabudevan uncovered for himself.

Vijay Prabudevan, a 48 year old working professional from Bangalore, joined GOQii in 2015. Before that, his food habits and lifestyle choices had remained more or less the same – which included veg food, unabated consumption of oily food, frequently eating out and surrendering himself to the joy of eating.

His activity levels were quite low with inconsistent minimal walking. His sleep routine was marred by television and his mobile phone. This hampered his sleep time and quality. Stress levels were high and all of this took a toll on his health. He was diagnosed with high cholesterol. This was the moment he knew he had to change.

Getting Introduced to a Lifestyle Change

During his fight against his rising cholesterol levels, Vijay’s boss, who is an active user, recommended GOQii. His boss and a few of his friends were exploring different wearable in the market and had found GOQii to be the best. Although not convinced at first, Vijay Prabudevan was curious about the personalized coaching featured. He initially doubted the effectiveness of this model as he wondered how a coach, who hasn’t even seen him, will be able to help him with his health issues. His qualms about credibility were quelled once he came on board.

Beginning The Journey Towards Good Health

The first year with GOQii was tough for Vijay Prabudevan. There was no change in his cholesterol levels which only seemed to frustrate him. Change was difficult especially when it came to his meal patterns and their timings. He blames himself for this lapse as he was still not completely convinced with the concept and wasn’t consistent with his habits. He was trying to do too many things at the same time which ended in failure. In 2016, his coach guided him on the importance of introducing one habit at a time. His coach told him that it is an ongoing process and sustainable results will come slowly and steadily.

He began streamlining his meal plate. For instance, he reduced the amount of rice and substituted that quantity with salads. His plate now has 30% proteins, 30% fiber and 40% carbs. He also began adding fruits and nuts, which were non-existent in his diet before.

As of now, his breakfast is heavy, followed by a moderate lunch and a light dinner which used to be the opposite before. To keep his body active, he either incorporates 1 hour of walking, jogging or visits the gym 4 days a week. He has regularized his sleep timing as well. He ensures that he sleeps by 10 pm and wakes up at 6 am.

He has planned his work calls in a way that he winds up all his work before 10 pm. He has also begun Pranayama and meditation as recommended by his coach to work on his stress levels.

His cholesterol level which was at 400 mg/dL in 2015 before joining GOQii has now reduced to 200 mg/dL has been stable for the past 2 years. He is completely off medication. His weight has reduced from 84kg in 2016 to 73kg in 2020. His energy levels have tremendously improved. Thanks to this, he can work tirelessly and is more energetic than before.

Before, the word marathon or run used to scare him. Now, he has successfully completed around 6-7 5k runs in the last 2 years and aims to complete a 10k run before the end of this year.

He regularly uses GOQii to log his data and has explored the GOQii Health Store as well as purchased products during flash sales. He also enjoys reading the blogs within the app.

He says that one should believe in the GOQii ecosystem, follow the habits set by the GOQii Coach and be patient enough to see results. He firmly believes that if he can achieve his health goals, then anyone can. He had joined GOQii in 2015 and since then has renewed his subscription every year. Now he says that it is going to be a lifelong association.

Vijay Prabudevan is elated that he made the right choice with GOQii. What’s stopping you from making the shift?

We’ve always advocated that lifestyle diseases can be managed with a balanced, healthy and holistic lifestyle but can they also help you manage a terminal condition? Our Player Ananda Mukherjee, with help from his GOQii Coach, was able to battle such a … END_OF_DOCUMENT_TOKEN_TO_BE_REPLACED