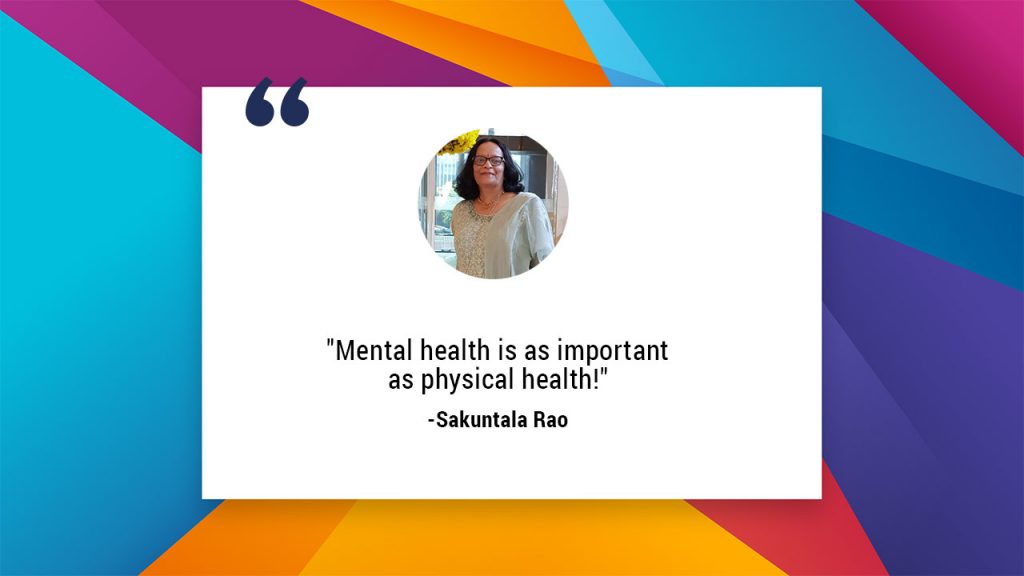 At some point in life, you can’t help but wonder that as you get older, things change. Life passes you by in such a blur that most times you’re unable to take control. Health issues begin to surface as medication and doctor visits become more common. While things seem bleak in this fixated downward spiral, there are individuals who think otherwise! At the age of 60, our player Sakuntala Rao can proudly say that life didn’t pass her by. She’s living it, breathing it and enjoying it to the fullest with good health… but was it always like this?

Hailing from Bangalore, Sakuntala Rao had two major concerns – sleep issues and fluctuating weight. Albeit, she was aware of the reasons for both her concerns but was unable to find a viable solution. She attributes her sleep issues to high levels of stress. Being a control freak, she used to get worked up when things didn’t go the way she wanted. She had trouble falling asleep and used to wake up in the middle of the night unable to go back to sleep. Less sleep hours and disturbed sleep were regular occurrences.

On the other hand, her weight was something she had always struggled with. This was due to her travel routine for work, her diet which was completely erratic, marred with junk food, untimely eating, and zero portion control. As she puts it, her eating habits were all over the place.

To add to this, she was under medication for hyperthyroidism for 14 years before she underwent Radioactive Iodine Therapy which reversed her condition the wrong way. She developed hypothyroidism since most of the gland was destroyed during the procedure. This again contributed to hormonal imbalance leading to weight gain.

She often tried fad diets from time to time. Though she lost a little weight, she would gain it back in a month or two. Her daily routine was also devoid of any physical activity. After her retirement in 2017, she got herself a personal trainer to help her get active. She decided she wanted to focus more on health and fitness. That’s where GOQii came in!

In 2018, her husband got her a GOQii tracker as a gift. She explored the app, learned about the coaching mechanism, live video coaching by experts and blogs which motivated her to stick with GOQii. She was assigned a GOQii Coach when she signed up. Her goal was to just get fit which, with help from her Coach, got narrowed down to her two major issues – improving sleep and weight loss.

All of this together, with the realization that she cannot control everything and that she needs to let go at times, helped her calm down. This reduced her stress greatly and thus, improved her sleep quality.

She wasn’t asked to change much in her diet as she had already started eating healthy. Only a few tweaks were made. For instance, including protein in each meal. She also began intermittent fasting on the 16/8 pattern – Her last meal being dinner at 6 pm and she breaks her fast at 10 am the next morning. The first thing she drinks is a glass of warm water followed by Ajwain (soaked overnight) and pink salt followed by nuts.

Her lunch consists of 2 rotis, some curry, and a large bowl of salad which consists of carrots, cucumber, radish, avocado, capsicum and some seeds mixed with curd. She consumes a cup of coffee and eats a fruit before that. Dinner consists of one roti, some curry, soup and salad.

Currently, she has set her goal as reaching a weight of 60kg in order to fall under the normal BMI range and maintaining that level.

Sakuntala Rao says that her sleep has improved significantly. She is now able to sleep for an average of 7 hours and doesn’t wake up in the middle of the night. Her weight has reduced from 79kg in July 2018 to 70g when she last checked. She feels that progress has been difficult but consistent. She thanks her GOQii Coach for being persistent and following up with her, ensuring she keeps on track.

Now, she believes that mental health is just as important as physical health, especially after the age of 60 with people talking about Dementia and Alzheimer’s everywhere. She has enrolled herself for a dancing class as a hobby and she is also associated with a group called Silver Talkies. They cater to people over the age of 55 and get them involved in various social activities. The group has also planned a dance performance for early November in support of a social cause.

Her current physical activities include functional workouts 4 days a week, walking for at least 4 days and attending dance class 2 days a week. She attempted swimming but gave up as she couldn’t overcome her Aquaphobia (fear of water).

What Sakuntala Rao Thinks of GOQii

Sakuntala Rao praises her GOQii Coach for helping her make such a positive lifestyle change. She said her Coach was very prompt in her responses, be it a comment or a problem. She is very pleased with the fact that her Coach personalizes her entire routine keeping her age in mind. She also shares a lot of information which is educational and useful.

Has this story inspired you to make a change? If anything, it tells us that even if we can’t control everything, we can certainly control our health and the choices we make. Want to share your story with us? Fill this form and we’ll reach out to you.

We’ve always advocated that lifestyle diseases can be managed with a balanced, healthy and holistic lifestyle but can they also help you manage a terminal condition? Our Player Ananda Mukherjee, with help from his GOQii Coach, was able to battle such a … END_OF_DOCUMENT_TOKEN_TO_BE_REPLACED