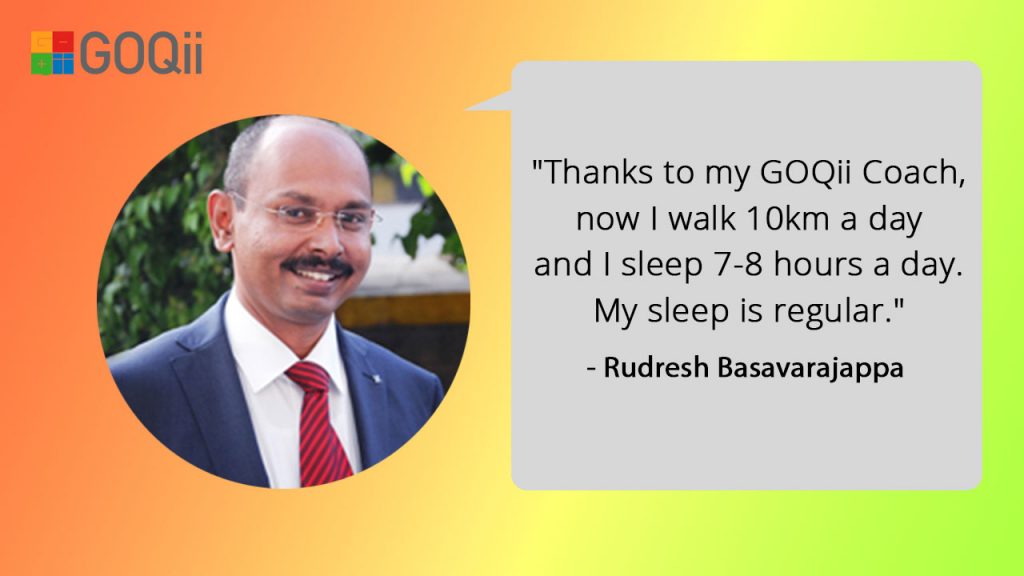 Sometimes, our health issues seem overbearing and we’re unable to break free. These illnesses can cripple our ability to function normally. While some issues require medical assistance, there are some that can be fixed with simple lifestyle changes. Our player Rudresh Basavarajappa suffered from insomnia for the longest time till he found GOQii and his life changed completely.

Rudresh Basvarajappa is an entrepreneur based in Bengaluru. He runs a software company that employs 200 people. He had been battling sleep issues for a long time. He would sleep only for 20 minutes to half an hour. This lack of sleep affected his personal and professional life. Along with insomnia, he was also battling the loss of an untimely death of his brother-in-law and business partner.

His insomnia issue created complications such as shivering of his hands and legs. He had gravitational Oedema. Due to gravitational oedema, he could not walk or even wear his shoes due to the pain. It affected his sleep further. Moreover, he was also smoking around 20 cigarettes a day.

He visited a doctor and after numerous tests, they could not arrive at any conclusion. He was prescribed sleeping pills. As 1 dose did not work, he had to up it to 2. This didn’t work for him either.

Making a Shift With GOQii

After trying everything possible, Rudresh Basvarajappa came across a GOQii ad in the newspaper. He was intrigued that it was a Make in India product – of which he is a fan. Since it was during the pandemic, he found the features to track SpO2, temperature and other vital parameters very useful.

Since he got the tracker, he hadn’t selected a coach for almost 2-3 months as he did not believe in coaches. In due time, he had to forcefully select a coach and opted for Coach Nishreen. Despite his earlier qualms about coaching, he says that the GOQii Coach was the best thing that happened to him. Within a month he witnessed positive results and was able to sleep properly.

He says, “The GOQii Coach is like a god to me. The Coach was very perseverant. Slowly and steadily she introduced activities and food changes. Now, I walk 10km a day and I sleep 7-8 hours a day. My sleep is regular. My wife and son who are fitness freaks also noticed these positive changes in me. Then my wife wanted my son to be on GOQii as well . But I wanted the same coach for him too. Glad that now Nishreen is both mine as well as my son’s coach.”

What Does Coach Nishreen have to say about Rudresh Basvarajappa?

Rudresh was very focused, determined and committed when he came onboard. He just had one thing in mind, that is to lead a healthy lifestyle. He joined GOQii to reduce his stress, improve sleep as he used to take 2 sleeping pills and reduce gravitational oedema – a gravity-related swelling in the lower body. He smoked 20 cigarettes everyday.

He had done all the possible tests as suggested by senior doctors but couldn’t come to a conclusion. This was adding to his stress as he couldn’t wear appropriate footwear and thus, further disturbing his sleep cycle.

After our first call we decided to make simple lifestyle changes like starting Pranayama to relax his mind, reducing the number of cigarettes as he was keen to quit smoking and some leg raise exercise to improve blood circulation. He had a passion for exercises, so he enjoyed his morning walks.

Over the span of 2 months, he could see reduction in swelling and great improvement in sleep. We were able to cross each and every milestone in his health journey up to date. He is able to sleep immediately as pranayama is a medicine for sleep, he has quit smoking and oedema in his legs is almost NIL! He’s very honest and disciplined. So he adheres to any changes and accepts them without complaint. He maintains a two way communication and shares his updates with me every day!

Recently, Rudresh Basvarajappa appeared as a guest on GOQii Health Talks and shared his journey with our Founder & CEO Vishal Gondal. You can watch the entire live session here:

For more inspiring stories, check out Healthy Reads! To get your own GOQii Coach, sign up for personalized coaching here: https://goqiiapp.page.link/bsr

Imagine an event where each and every person has a unique tale to tell, despite having taken similar paths or adventures. Have you ever gone through it? We’re about to share the experience of Kamal Chandran, Group Head - HR at GOQii, who participated in the … END_OF_DOCUMENT_TOKEN_TO_BE_REPLACED