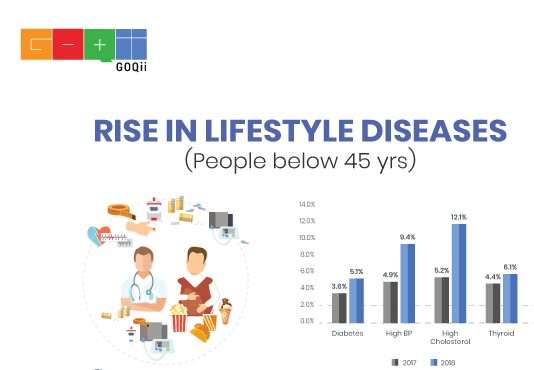 You must have heard the term “Lifestyle Disease” before, but have you ever wondered what it is? As the name suggests, they’re diseases which are linked to your way of life. For example, if someone is leading a sedentary lifestyle, with minimal or no physical activity, that person is more susceptible to diseases like Diabetes, Cholesterol, High Blood Pressure etc. On the other hand, a physically active individual has lower chances of contracting these diseases. Unhealthy eating and lack of physical activity are the main reasons behind lifestyle diseases. Let’s take a look at the trend of Lifestyle Diseases in India as per the GOQii India Fit Report 2019.

Image: “Since last year, there has been a rise in the number of lifestyle diseases among people overall.” – India Fit Report 2019

According to the report, there has been a rise in Lifestyle Diseases since last year among individuals who are below the age of 45. This is an alarming trend as it clearly shows the rise of an unhealthy lifestyle among the younger generation. Let’s take a look at the major lifestyle diseases affecting India, namely High Blood pressure, Diabetes, Cholesterol and Thyroid.

Cholesterol
Since last year, the percentage of cholesterol among Indians has increased from 10.1% to 14.1% as per the Report. It also says that 68.9% of the affected individuals take no medication to tackle the condition but aim to overcome cholesterol by making changes to their lifestyle. Since cholesterol is a condition that can be cured by lifestyle changes, it is something the rest should aim to achieve. Currently, Kolkata (18.2%), Delhi (17.3%) and Bengaluru (15.3%) are the major cities with the highest number of people suffering from Cholesterol.

High Blood Pressure (HBP)
High Blood Pressure is another serious condition which is often overlooked by Indians. 34% of the population has HBP running in their families. This data alone shows how serious this condition is in India. HBP has increased from 9% to 12% over the last year and about 44% of the affected individuals look to tackle the condition without the help of medication. Kolkata (21.9%), Mumbai (13.7%) and Delhi (13.6%) are the cities that have high concerns of HBP as per the Report.

Diabetes
We are all familiar with Diabetes as it is one of the most common lifestyle diseases out there. Chances are that at least one individual in your family is suffering from Diabetes. As surprising as it sounds, the rise of Diabetes in India has decreased from 7.9% to 7.1% since the last year. The increased awareness is one of the reasons behind this dip. Research indicates that 33.7% of the people affected by Diabetes are looking to tackle this condition without the help of medication. Like HBP, Diabetes is also a condition that usually runs in the family.

“31.8% of the users claim a family history of Diabetes. Thus, it is a key illness to watch out for in the future” – India Fit Report 2019

Thyroid
Thyroid issues, unlike other diseases, has remained the same at 6.8% of the total population. Mainly women face this issue and they also deal with fluctuating weight caused by it. About 9.6% of the population reported a history of thyroid issues in the family.

The only thing good about these conditions is that they can be tackled by living a healthier and active lifestyle. Exercise, quality sleep and proper nutrition are extremely necessary in order to overcome these diseases. It is no secret that as you get older, you tend to succumb to more diseases.

According to the GOQii India Fit Report 2019, 30% of 20-30-year-olds reported some kind of medical issue, 48% of 31-45-year-olds and 74.6% of the users above the age of 60 reported some issues medically. It is very important to follow a good lifestyle from a very young age so that you can avoid these diseases in the future. As the old adage says, “Prevention is better than cure!”

Have you ever suffered from a cold or fever and thought to yourself that you can manage this? In fact, there’s a good chance that with some medication and rest, the symptoms of a cold or fever have subsided. But, when you deal with issues such as Diabetes and … END_OF_DOCUMENT_TOKEN_TO_BE_REPLACED