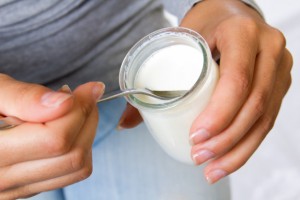 The summer heat is killing! Wish I could eat something that’s chilling and soothing for the stomach, is the thought process that most of us go through. There are lots of summer foods and coolants available but nothing as handy as yoghurt and yes it is also one of the best foods for weight watchers.

Personally, Yoghurt has always been a part of my diet. The reason it was added to your meals is to have a healthy gut. As a child, I never understood these nutritional nitty-gritties, it is only when I started studying nutrition, I learnt about the benefits of curd.

Curd or Yoghurt as it is called is it same? While most think it’s the same thing, there is a slight difference between these two.

Yoghurt is a diary product that is created by fermenting milk using bacteria called yoghurt cultures. The bacteria ferment the lactose in the milk causing it to produce lactic acid, which gives yoghurt its tangy and acidic taste. The word ‘yogurt’ is derived from the Turkish word    ‘yogurt’ which means “to curdle or coagulated; to thicken”

The curd is another type of dairy product. Curds are made by curdling or coagulating the milk. This can be done by mixing edible acidic substances into the milk, such as lemon juice or vinegar. Introducing this substance to the milk will allow the milk to curdle and separate into two parts. The liquid part is the whey and the milk solids will be the curds. The whey contains the whey proteins of the milk, whereas the curds are the milk proteins or casein

We all know yoghurt is creamy and delicious. But, beyond that what else do we know about the yoghurt?

In Hindu worship, Yoghurt is added in Panchamrita. Yoghurt symbolizes strength and prosperity.

Did you know that yoghurt can make your workouts less tiring by reducing the muscular stress?  If yoghurt is consumed on a daily basis, it facilitates the further functioning of the active T-cells (dominant cells responsible for maintaining the immunity of the body). In case of people who follow a regular workout regime, yogurt soothes the muscle stress and post workout recovery is faster and better.

When you make it at home, it’s safe. But, when you buy from the market…. BE AWARE: Yogurt is often marketed as a healthy food. However, the sugar and flavourings added to many yogurts can make them more like junk food.

Reading the label is the first thing you should do when choosing a yogurt. The nutrition facts and ingredients list can tell you a lot about what’s in your yogurt.

How to choose healthy Yogurt –

3. Probiotics are the friendly bacteria that turn milk into yogurt. Look for yogurt with the “Live and Active Cultures” seal and avoid yogurts that have been pasteurized after production. 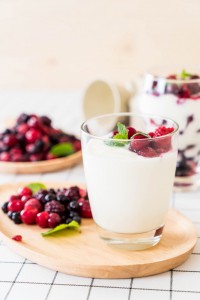 You can also make your own chia seed yogurt to make plain yogurt less tart. And, as a bonus, you’ll get extra protein, fibre and healthy fats with the chia seeds.

Well, you can flavour your cuppa of yoghurt with either fruits, berries, banana, chocolate, mint coriander, mango or cinnamon and cumin spice, granola mix.

Let’s enjoy the cup of yoghurt in our next meal.

Trupti Hingad believes that by being fit, you add life to your years, not years to your life! Also, health is not about the weight you lose, but about the life you gain! She has a Post Graduate Diploma in Dietetics and Nutrition and has certification in Diabetes Education and Yoga Asanas and Pranayam. With vast experience in the field of diet, fitness and lifestyle Management, she truly believe in maintaining a healthy body for which, she practices what she preaches. She loves to try out new cuisines and their healthier versions. Honestly, that’s the secret of her fitness she says. She feels that a balance in life, especially when it comes to food, mind, thoughts and emotions, is a must in order to lead a happy and successful life

While earning a good livelihood is important, is it taking more life out of living? Long working hours, being seated most of the time with no physical activity and bad eating habits can take a toll on your health over a period of time. If this sounds … END_OF_DOCUMENT_TOKEN_TO_BE_REPLACED