Since October 2014, Kamal from leading a very unhealthy lifestyle to turning an ace marathoner in a years time has now made fitness & running a way of life. Let’s hear it from him how he achieved his goals.

Kamal Karnatak is a busy CIO of an Indian MNC. He lives in New Delhi and works in Gurgaon. His office is a neat 43 km away and he travels by car for almost 2 hrs (One Side) -5 days a week.  Just as he is passionate about his work, he is also passionate about leading a healthy lifestyle and has become a great inspiration and motivation to many of his friends to follow the same. His day starts at 5.30 am and he is out for a 6 km run at 6 am on alternate days and on weekends he runs 10 km. The days he is not running he resorts to strength training. Here is how he did it?

“I was aware of my shortcomings and kept trying to get fit. I tried several other wearables available on the market until I tried GOQii. I knew about it and decided to give it a try. I found that GOQii is entirely different from other so-called fitness bands, while other tracks various body parameters, GOQii band connects you to complete health ecosystem with real people. I got on to GOQii ecosystem in Oct 2014 and since then the one big change I have brought to my life is getting a proper routine.  I exercise every day and eat five meals a day (mindful eating).”

When Kamal started using GOQii, he did not have any fixed routine for exercise. His daily routine was to travel 43 km to work in a car for 2 hrs from New Delhi to Gurgaon to and fro. Lack of any exercise, incorrect nutrition had caused indigestion and bloating. To add to these, his total cholesterol was as high as 270 and BP were 90/130 much above the normal. With the right intention to want to get healthier and fitter, he would exercise only when he had the time. He found that his normal steps per day were 3000-4000 and during weekends it used to be only 2000-3000. “I was always under the impression that I do not have enough time to exercise.”

After he got on to GOQii he was given a target of at least 10K steps per day and that for him was a difficult task to achieve.  So he added walking to his routine. Soon after 8 months of being on the GOQii platform; on a daily basis he was achieving nearly 12K steps per day and that count went up to 25-30k during weekends. “My coaches helped me to achieve that over a period of time and it was such a gradual process for me that now it has become a lifestyle,” asserts Kamal.

He Crawled to Walk-Run 42 min to a Half Marathon 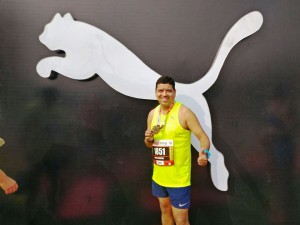 After two months of using GOQii and achieving his targets (Steps, Water, and Sleep) on a daily basis he was still not losing weight. So his coach asked him to start 1 min run and 2 min walk routine for 21 min. She also asked him to plan to participate in a 6K run within a year’s time, which Kamal says he laughingly ignored. “I still remember that on the cold morning of December’14 when I ran, I could barely run only for 42 seconds at a stretch on the first day and after that routine of nearly 20 min, I was quite exhausted. My foot muscles were soaring with pain and I thought that I may not be able to walk the next day. I shared the same with my coach and she said that do this for next 3 days and everything would be fine,” he says.

And surely it was all ok and after 8 months he could run for 42 min continuously. In November 2015, he completed his first half marathon (21.1 KM) in 2hrs 34 min. Now he is sure that if he continued to follow his regime he would surely be able to run 42 KM marathon by this year. While his goal was to lose weight, he achieved that as well and lost some 12 kg by now. The best part is that his other issues of high cholesterol and high BP also normalized.  Running he says was never part of his goal but it happened and he is glad it did.

The plan was to go from fit to fitter

Today, Kamal’s overall fitness has improved. “With the help of my coaches, I made many permanent lifestyle changes. I also realized that health is not a project as it does not have any end date, it’s a continuous process and with the right kind of motivation anything can be achieved. I, who always used to complain that I do not have enough time for exercise, now always look for exercises/walking/running excuses,” says Kamal. “My journey continues with GOQii and I feel that it would help me to become a fitter person,” he adds.

What does Coach Kruti Jain have to say?

Kamal is a focused & a determined player. His journey has always been progressive. He wasn’t very consistent with his activities (due to other priorities) earlier. But, when he joined GOQii, it looked as if he has promised himself to not fail this time.

In spite of many hurdles, he would manage to get back to the regime. He started off with the goal of losing some weight because of which he was directed towards running.

From a simple goal of weight loss, his goal changed to running a half marathon by the end of the year and he did it. Clearly emerged a winner. He is one such player who keeps his coach on her toes. His interest & obedience makes you feel responsible & you want to help him in every possible way.

We’ve always advocated that lifestyle diseases can be managed with a balanced, healthy and holistic lifestyle but can they also help you manage a terminal condition? Our Player Ananda Mukherjee, with help from his GOQii Coach, was able to battle such a … END_OF_DOCUMENT_TOKEN_TO_BE_REPLACED