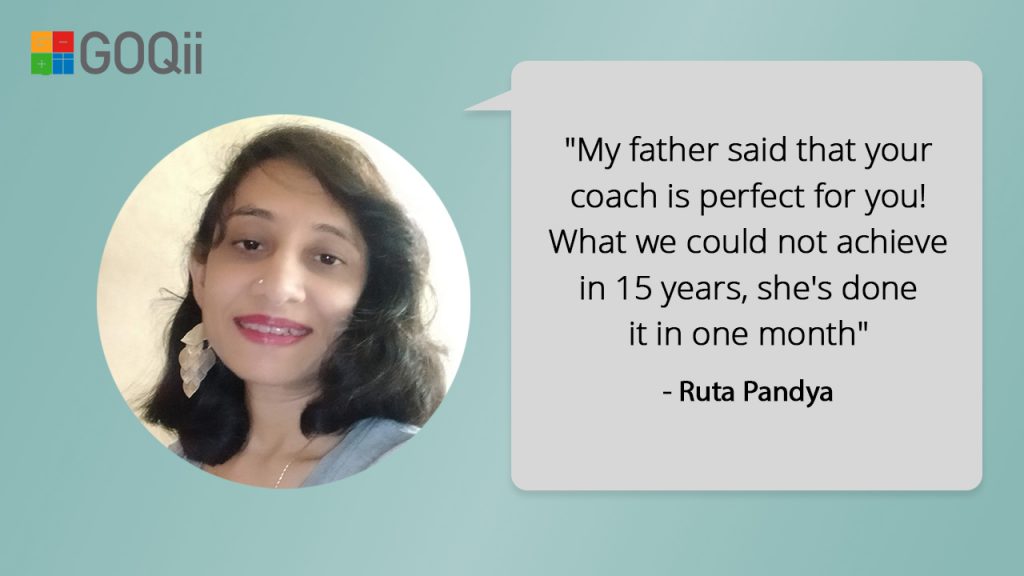 We’ve always spoken about how you can manage lifestyle diseases with minor tweaks to your habits. But sometimes, it isn’t enough. Especially when one condition leads to another. Our player Ruta Pandya suffered from a condition called Ulcerous Colitis and a series of other medical issues which she battled for years. After fighting an uphill battle for what seemed like eons, she was finally able to manage them well with help from her GOQii Coach Hina Marwaha. Here’s how her Health Story unfolded.

Ruta Pandya is a 44 year old teacher. For the past 17 years, she suffered from Ulcerous Colitis – which is a chronic, inflammatory bowel disease that causes inflammation in the digestive tract. Its symptoms include rectal bleeding, bloody diarrhea, abdominal cramps and pain. Along with this, she also suffered from Arthritis.

Her medical issues began after she had contracted Typhoid. Due to the Ulcerous Colitis, she had issues with food absorption which eventually led to weight loss. She weighed 30kg and her BMI was 12.6 – which meant she was severely underweight. This was primarily due to skipping meals. If she ate proper meals, she would face digestive issues which were difficult to manage.

During her struggles and multiple doctor visits, she was recommended to try GOQii through her doctor in Ahmedabad. After much thought, she joined as a part of the Abbott Gut Health program.

When Ruta Pandya spoke to her GOQii Coach Hina Marwaha, she was quite hesitant towards the coach’s suggestions regarding food habits. She refused to eat as she feared digestive issues but Coach Hina was persistent. After a couple of tries, Ruta finally gave in and began making changes to her eating habits.

She was asked to start with small quantities and gradually increase intake. Earlier, if Ruta ate one meal, she would skip the next. Coach Hina’s task was to ensure that Ruta ate all her meals without facing any issues. She gradually increased Ruta’s breakfast intake which included nuts such as walnuts, almonds, figs, etc. Later, milkshakes were also added to her diet.

Ruta was asked to divide her meals into 5-6 parts i.e. to eat every 2-3 hours. She had to avoid hot and spicy foods as they would trigger the acidity and make her stomach ulcers worse. Slowly, fruits were added to her diet – which were light, high in antioxidants and helped her heal her gut as well as get more energy. Slowly, Ruta Pandya began eating more without facing digestive issues.

She was also asked to walk and perform exercises. Yoga, along with small walks helped Ruta Pandya build her strength and alleviate back pain and find some relief from arthritis. Before, Ruta would struggle to complete even 2k steps but by slowly increasing step counts, she can now walk 7km.

Currently, Ruta’s food habits have improved tremendously. Before, she used to skip breakfast and mid meals and now, they are a part of her daily routine. She eats every 2-3 hours. She is happy that she is able to eat, absorb nutrients and put on weight. Her BMI is now at a normal range of 17 and her weight is around 35kg.

In the 3-4 years that she has been with GOQii, her Irritable Bowel Syndrome is under control, constipation is non-existent and her digestion issue has also been resolved. Apart from that, due to back pain, she couldn’t walk long distances but now she can cover them with ease and she works out as well. Some of the changes also include:

Recently, our Founder & CEO Vishal Gondal spoke to Ruta Pandya about how her Health Story with GOQii unfolded. You can view the complete conversation here –

What Does Coach Hina Marwaha Have To Say About Ruta Pandya?

Ruta started her journey with GOQii in September 2018. The day she joined as a player, she was having a lot of health issues. At that time, it was her inner fire and faith in herself which was pushing her to the levels where she was putting all her efforts to follow the routine.

Due to her medical condition, it was not possible to give her all the tasks at one time, but we followed the concept “Slow and Steady always wins the race”. At a time, only 1 or 2 tasks were given to follow and focus on. Like a mother, I have seen her changing and improving. I have seen her screaming and crying in pain and now she has empowered herself so much that she goes for long walks and does yoga every day.

In this beautiful world, our body is capable of responding and evolving at every second minute, positively or negatively. Ruta is a live example of this. With her dedication to get fit, potential to follow the routine, consistency with the routine and managing her time, she has proven that “proper diet and lifestyle” can help you evolve and grow, mentally and physically. Undoubtedly, she is an inspiration to me and to others as well.

Does Ruta’s Health Story inspire you to start yours? Subscribe for GOQii’s personalized health coaching today to begin your Health Story now: https://goqiiapp.page.link/bsr

Imagine an event where each and every person has a unique tale to tell, despite having taken similar paths or adventures. Have you ever gone through it? We’re about to share the experience of Kamal Chandran, Group Head - HR at GOQii, who participated in the … END_OF_DOCUMENT_TOKEN_TO_BE_REPLACED