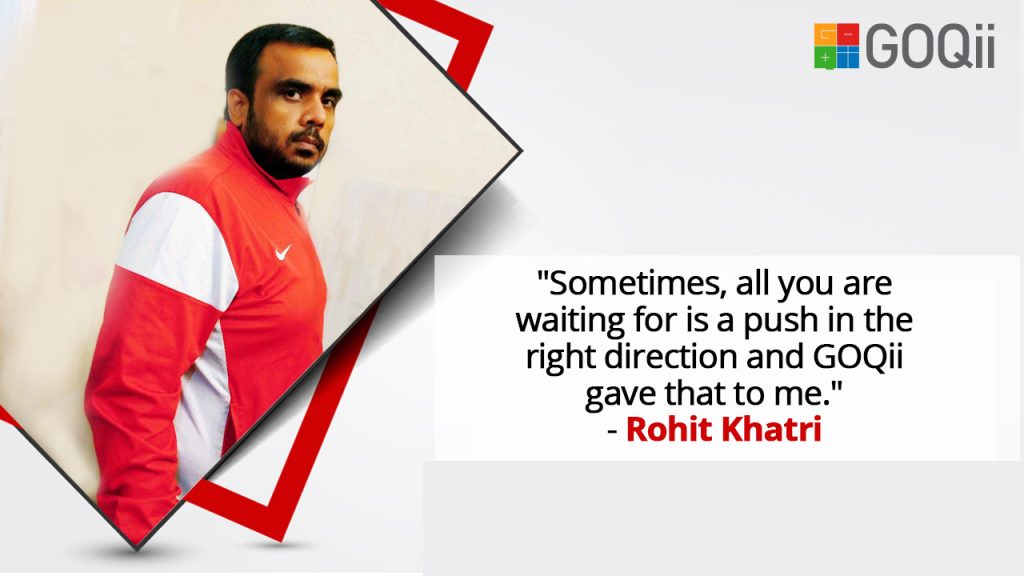 The choices we make early in life often determine our current predicaments. Unhealthy choices always lead to unhealthy consequences. But it doesn’t have to stay that way. It is never too late to make a shift to healthier choices. Lifestyle diseases can be reversed and you can live a healthy and fulfilling life. When things seem the bleakest, all you need is a gentle push in the right direction. Don’t believe us? Just ask our player Rohit Khatri!

Finding GOQii To Make A Change

Rohit Khatri is a 32 year old Delhi-based businessman who was introduced to GOQii through the ABBOTT Gutfit program in 2016. His doctor had asked him to register for a 3 month subscription with GOQii to adopt lifestyle modifications to manage his GERD issue as well as his weight, which at that time was 132kg. The doctor said that the only way he could get relief from GERD and other associated issues is when he reduces his weight.

“Most times, you know what the problem is but you can’t seem to do anything about it. You just give up and let life take its course,” says Rohit. He knew his weight had increased incredibly over the years and he just seemed to lack the will to do anything about it. He commends both his coaches, his previous coach, Swati and current coach Sakhi Agarwal, for giving him the confidence and the push to tackle his weight issue.

He points out that untimely eating, overeating and having absolutely no control over his junk habits were the sole cause behind his enormous weight gain.

The first and foremost thing that his coach assured him was that he doesn’t have to go through any drastic changes to his routine. She said they will adopt a gradual yet consistent method to losing weight and resolving his gastric issues. He was asked to make the following changes to his routine:

As a result of following his new healthy habits daily, Rohit Khatri witnessed the following changes in his life: “

He says that shopping for clothes earlier used to be a nightmare as he didn’t have many options for his plus size but now he doesn’t have to struggle as much. He is pleased with the compliments he gets from people for his weight loss and that even after 4 years, the weight he lost hasn’t come back. It makes him happy that he achieved his goal.

What Does Rohit Khatri Have To Say About GOQii?

He is grateful to both his coaches and says he owes it all to them. If not for them, he wouldn’t have gotten the push to focus on his health. They made it seem too easy to him, corrected him whenever he went wrong, motivated, and encouraged him at every step.

“Sometimes, all you are waiting for is a push in the right direction and GOQii gave that to me,” says Rohit Khatri. Now the habits have become a part of his life. He says that he can’t imagine a day without his jeera water, fruit and exercise.

What Does Coach Sakhi Agarwal Have To Say About His Progress?

Rohit Khatri was transferred to me on June 5, 2020. He was an Abbott Player and had a history of GERD. At the time, his weight was 120kg in July, his waist was 40 inches and his sleep time was disturbed i.e. 2am to 11am. I suggested 3 habits as per his goals:

Later, I introduced other habits like replacing biscuits with roasted snacks or fruits and eating meals on time.

Now, he has increased his step count to 16-20k a day. He lost 11kg and 5 inches in 5 months. His current weight is 109kg and waist size is 35 inches. He is currently working hard to reduce his weight further and getting healthier. He is happy with his progress and has renewed his subscription for 1 year.

We’re thrilled to see Rohit Khatri make progress the right way with the right push from our team of experts. Found this story inspiring? Want to make a lifestyle change or know someone who wants to? Ask them to visit our website www.goqii.com or download the GOQii App now: www.goqii.com/app

For more stories to motivate you, check out other transformation stories on Healthy Reads.

Imagine an event where each and every person has a unique tale to tell, despite having taken similar paths or adventures. Have you ever gone through it? We’re about to share the experience of Kamal Chandran, Group Head - HR at GOQii, who participated in the … END_OF_DOCUMENT_TOKEN_TO_BE_REPLACED