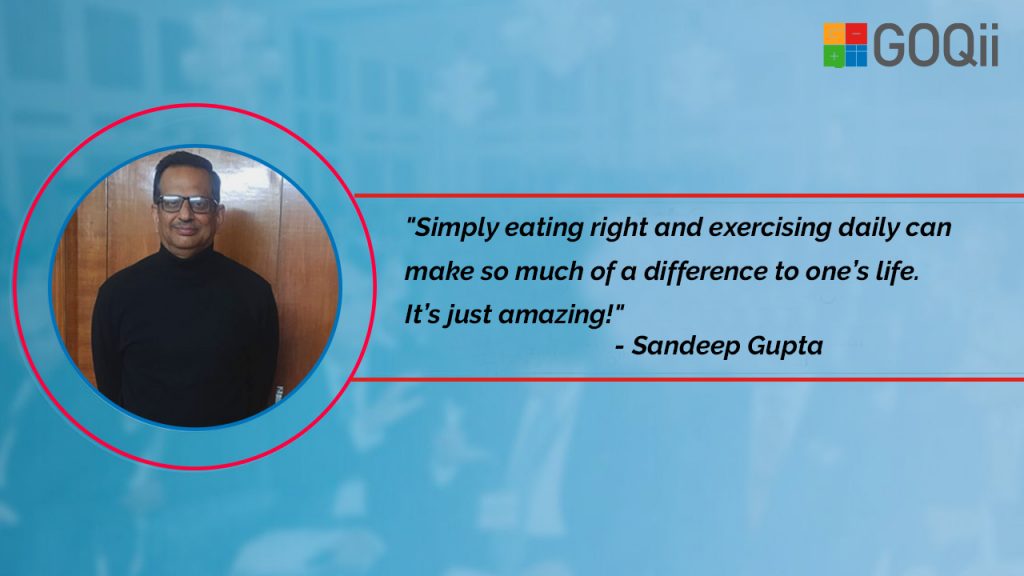 Sandeep Gupta is 55 years old and is a businessman who renders services to the Ministry of Defense. He was overweight at 86kg and suffered a lot from gastric and chest pain. This continued for 5 years and he was on medication as well. However, in the past 6 months, some positive changes have helped him lose 9kg and take control of his life and health. So what happened in the last months?

Before he came onboard GOQii, Sandeep Gupta used a smart watch which he says didn’t help much. There was no guidance and he would exercise a little. Since his work involved travel, he had no control of his diet, he used to eat out most of the time and that caused persistent acidity issues. He had to take an antacid daily.

To add to this, he also suffered from allergy issues for which he had to take anti-allergy medication. He says he was at least 9-10kg overweight.

Around May 2021, he came across GOQii on the internet and bought a tracker with a 3 month personal health coaching subscription. He got a coach to guide him on a daily basis. He says, “It was pleasant to have a coach guide me on my diet and exercise”.

He had his first intro call with his GOQii Coach and explained his issues to her. He says, “My GOQii Coach understood my issues and slowly started making changes. First was to improve water intake from 1L to 2-2.5L. This was to better digestion, prevent toxin build up and stomach inflammation. Then the coach slowly brought about dietary changes.”

Salads and fruits became a part of his regular diet and he started eating at proper intervals. These habits helped him a lot and he did not experience acidity issues anymore. His energy levels also improved.

His antacid medication was reduced to once a week. Gradually, more healthy habits such as beginning the day with a fruit, lemon water post meals and Surya Namaskars were introduced. His acidity issues improved to 80%. For further improvement and to support fat loss, regular tea was replaced with ginger tea.

He was also introduced to strengthening exercises along with daily walks and cycling on alternate days. 30 minutes of exercise either in the morning or evening became mandatory. Thanks to these changes, in the last 6 months he lost 9kg and his current weight stands at 77kg.

He says that, “My GOQii Coach’s guidance has come as a boon to me. My wife was worried prior to me joining GOQii, as she was concerned about how I am going to deal and get over my gastric and acidity issues. But now, she finds that I am more relaxed and doing much better. My family has also started benefiting and they are taking health seriously as well. It’s a ripple positive effect that has trickled down to the family. As a head of the family I feel proud that I am able to set an example for my family to lead a healthy lifestyle. Simply eating right and exercising daily can make so much of a difference to one’s life. It’s just amazing!”

What Does His GOQii Coach Have To Say About His Transformation?

Sandeep Gupta joined GOQii in May 2021. Since his work involved lots of travelling, it led to eating the wrong foods at the wrong time, which caused persistent acidity issues for which he had to take antacid medication.

To add to it, he also had allergy issues and was on medication for the same. Other medical issues involved low blood pressure and a history of epilepsy, for which he had stopped medication 4-5 years ago. He was also at least 9-10kg overweight.

After completing our Intro call, the first step was to gradually improve his water intake. Next was to replace the intake of packaged/processed food, which are harmful for managing acidity due to their sugar, trans fat and refined carb content. They were replaced with roasted snacks.

To alkalinize the system, also for fat loss, I asked him to add salads to his diet. This intervention led to a 50% decrease in acidity and reduced frequency of antacid to once a week. His energy levels improved after 2-3 weeks. Currently, he has reached his ideal weight and is healthier and happy!

We hope Sandeep Gupta’s journey inspires you to make a lifestyle change. Do you also suffer from acidity issues? Want to get healthier? Sign up for GOQii’s personal health coaching and speak to a certified GOQii Coach now: https://goqiiapp.page.link/bsr

Does being sedentary after retirement sound familiar to you? Could be you, a loved one or someone you know. J Ravichandran, a 63 year old retired CA from Chennai, experienced the same. As a CA, his work involved a lot of traveling - which kept him active. … END_OF_DOCUMENT_TOKEN_TO_BE_REPLACED