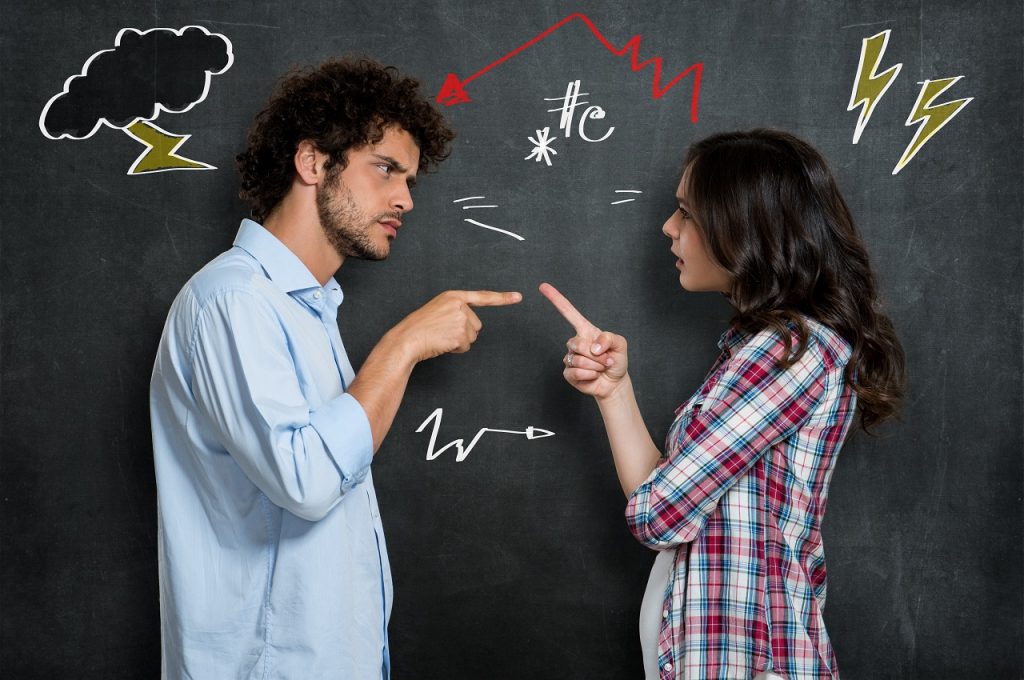 How many times have we fought in our intimate relationships with our partner? Definitely more than a few times. Couple conflicts in itself are not unhealthy, it gives us an opportunity to look at the areas of the relationship that need the most attention. A couple conflict about one partner not helping in housework highlights the feeling of being left out and alone in life’s mundane struggles. Yes, there are umpteen reasons that couples fight or are in disagreement but these conflicts act like a muslin cloth through which pass the impurities that affect the relationship.

All relationships, including the successful ones, have couple conflicts. It is unavoidable. Fortunately, it’s not the presence of conflict, but rather how it’s managed that predicts the success or failure of a relationship. We say “manage” conflict rather than “resolve”, because relationship conflict is natural and has functional, positive aspects that provide opportunities for growth and understanding. Also, there are problems that you can’t solve due to natural personality differences between you and your partner.

Couple Conflicts and How To Manage Them

1. Criticism
We criticize our partner when they fail to live up to our expectations. But criticism is different than a complaint. The latter is about specific issues, whereas the former is an attack on your partner at the core of their character. In effect, you are dismantling their whole being when you criticize. For instance:

Complaint: “You reached almost an hour late for our lunch.”

Criticism: “Punctuality is an issue with you. You are never on time. You never think of me, you are that forgetful, you’re just selfish.

The problem with criticism is that, it makes the victim feel assaulted, rejected, and hurt. It often causes the perpetrator and victim to fall into a vicious pattern where criticism reappears with greater frequency and intensity, which eventually leads to contempt.

Antidote to Criticism – Gentle Start-Up: A complaint focuses on a specific incident, but criticism attacks a person’s very character. The antidote for criticism is to focus on the complaint without blame. Avoid saying “you”, which can indicate blame, and instead talk about your feelings using “I” statements and express what you need in a positive way.

Rephrasing the above complaint in this manner, you can say, “I was really eager to meet you today at lunch. Off late, we haven’t been able to spend a lot of time together and I felt disappointed when I did not see you on time”.

2. Contempt
Contempt goes far beyond criticism. While criticism attacks your partner’s character, contempt assumes a position of moral superiority over them. When we contempt someone, we are truly mean — we treat them with disrespect, call them names, and mock them with sarcasm. The target of contempt is made to feel worthless.

I will quote a real example of contempt from my relationship when the man said on the issue of his lack of libido that I am a sexual pervert (tharak). While I reacted to this insinuation, also putting blame on his character, both of us had our own learnings from the episode. I resorted to criticism and he resorted to contempt.

Antidote to Contempt: is to build a culture of appreciation and respect in your relationship. Remember the tip – Small Things Often: If you regularly express appreciation, gratitude, affection, and respect for your partner, you’ll create a positive home in your relationship that acts as a buffer for negative feelings. The more positive you feel, the less likely that you’ll feel or express contempt!

3. Defensiveness
We become defensive when we feel accused, we fish for accuses and play the innocent victim so that our partner will back off. Unfortunately, these excuses never work. Our excuses just tell our partner that we don’t take their concerns seriously and we won’t take responsibility for our mistakes.

Question: Did you not see that I was attending this important official call and you put the pressure cooker on, it was making whistles and disturbing me

Defensive response: It’s okay, even other people would enjoy the sound of whistles.

4. Stonewalling
Stonewalling occurs when the person withdraws from the interaction, shuts down, and stops responding to their partner. Rather than confronting the issues with their partner, people who stonewall can make avoiding maneuvers such as turning away, acting busy, stop talking or showing distracting behaviors like scrolling on the phone while you talk to them or spending too much time sleeping. Stonewalling is like a flight or fight response and puts couples under a lot of emotional pressure.

Antidote to Stonewalling – Practice Physiological Self-Soothing: If you feel like withdrawing or shutting off in a conflict, take a break. Allow your body to physiologically calm down by doing an activity of interest such as walk in the park, cooking your favorite dish, getting ready, doing anything you like. Inform your partner that you need some time for yourself and then return to the discussion in a rational and respectful way.

We hope this article on managing couple conflicts helps you form a stronger connection with your partner! Do leave your thoughts in the comments below. For more articles by our Sexual Wellness Expert Pallavi Barnwal, check out Healthy Reads or tune in to her LIVE sessions on GOQii Play. You can also connect with her on Facebook: https://www.facebook.com/pallavibarnwalcoach

While earning a good livelihood is important, is it taking more life out of living? Long working hours, being seated most of the time with no physical activity and bad eating habits can take a toll on your health over a period of time. If this sounds … END_OF_DOCUMENT_TOKEN_TO_BE_REPLACED