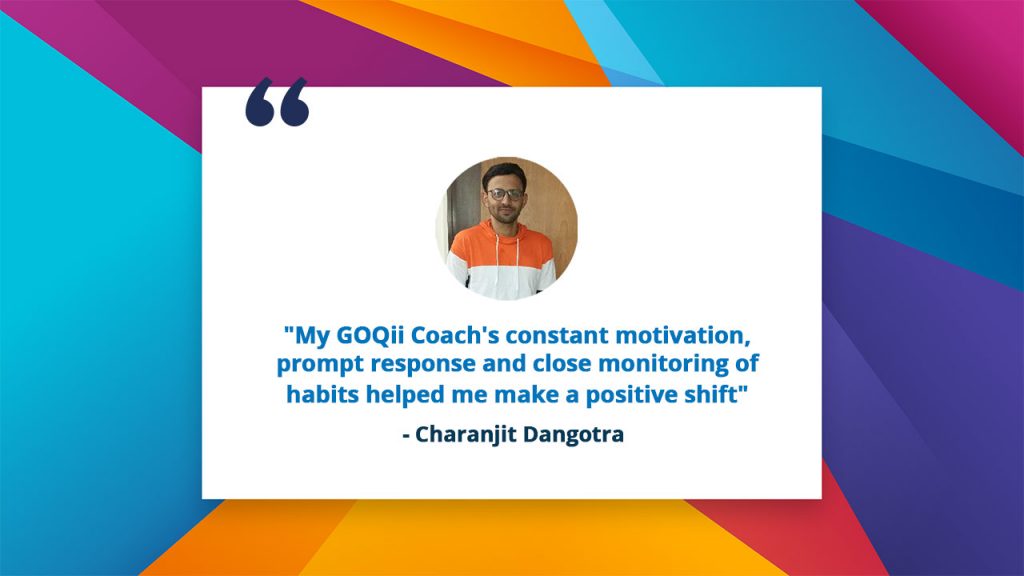 Stomach and digestion issues are not something you want on your side and if you’ve already had your run in with them, you know how they can hamper a good day. One of our GOQii Players Charanjit Dangotra faced a similar issue but with help from his GOQii Coach, he was able to turn his condition around and make a positive lifestyle change! Want to know how he battled Gastritis and won?

Like every working professional in Mumbai, the 33 year old Charanjit Dangotra led a very erratic lifestyle which revolved around long traveling hours and work. Untimely eating habits, no physical activity and a general lack of concern for health took their toll. 3 years back, he was diagnosed with Gastritis and has been on medication for the same.

Due to his long commuting hours, Charanjit Dangotra couldn’t find time for any physical activity and his available time was spent on television or his phone. When things couldn’t get any worse, his doctor advised him to take up the GOQii program in June 2019. He got a free 3 month subscription and from there on, there was no looking back.

Making the Shift to a Healthier Lifestyle

Once he was aboard the GOQii platform, he was assigned a GOQii Coach who spoke to him to understand his medical condition. The first thing addressed by his GOQii Coach was regularizing his meal timings. Now, he eats all his meals on time no matter where he is. He finished his dinner by 9 PM and sleeps by 11:30 PM on most days.

He manages to go to the gym 6 days a week where he performs cardio along with weight training as advised by his Coach. He has also begun introducing salads and fruits to his diet on a daily basis.

As a result of the minute lifestyle changes he made, he saw positive changes.

Although he still continues with his medication, the frequency of stomach pain has reduced. He feels more energetic nowadays and can give more time to things he couldn’t before. He has also reduced his weight from 69kg to 60kg.

What Does Charanjit Dangotra Think About His GOQii Coach?

He happily attributes all his improvements in health to his GOQii Coach. He says that it is due to her constant motivation, prompt responses and close monitoring of his habits that helped him make the shift. If he was unable to follow any habit for one particular day, his Coach would suggest alternatives. This gave him the flexibility he needed to manage his health while traveling.

“I trust her completely and reach out to her for anything and everything. I have even begun doing yoga once a week – an activity I was never inclined to. That’s how much she has influenced me!” He said.

What Does His GOQii Coach Have to Say About Him?

“Charanjit was a bit curious about what he can consume without causing any more stomach pain but was determined to improve his medical ailment (Gastritis – burning sensation and pain on right side of stomach) when he came on board. I was impressed by his sincerity to achieve his goal. We started with incorporating some physical activity in his routine. Along with that, we also worked on his nutrition. Since he was determined and followed habits regularly, we started seeing results such as reduction is stomach pain.

Slowly, we began working on his sleep and stress too. In between, he got a fissure problem, which after making a bit of modification in his water and nutrition we were able to improve to a 100%. Currently, he is not suffering from it and isn’t taking any medication for it either.

After constantly working on his goal and achieving good results, his doctor has also advised him to start incorporating foods which he was not allowed to eat before. Seeing his progress motivates me too and I’m sure that soon enough, we will be able to achieve his goal!”

After seeing all these wonderful results and changes, Charanjit has renewed his subscription to a whole year! What’s stopping you? Subscribe to GOQii now and witness the power of a healthy lifestyle. To read more inspiring stories, check out Healthy Reads.

We’ve always advocated that lifestyle diseases can be managed with a balanced, healthy and holistic lifestyle but can they also help you manage a terminal condition? Our Player Ananda Mukherjee, with help from his GOQii Coach, was able to battle such a … END_OF_DOCUMENT_TOKEN_TO_BE_REPLACED