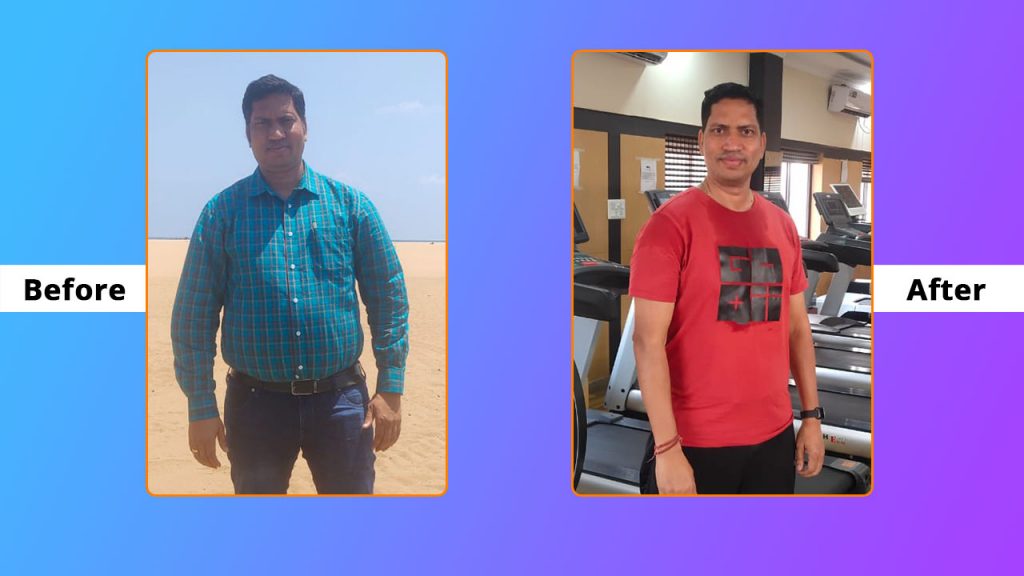 It’s no surprise that the heavy burden of managing this COVID-19 crisis has fallen heavily on our frontline heroes. The members of our police force have faced the worst of it. During this time, it is very important to keep oneself healthy in order to protect others. While this is expected, it is no easy task. Managing health, along with duty, was becoming increasingly difficult for Police Officer Susant Dash.

As an officer of the police force, his days were always hectic with no timely meals or sleep. He used to eat his lunch at 4pm and dinner around 12:30 or 1am after returning home. He had no control over what he would eat in between his meals – as it mostly consisted of a samosa or some street food from a vendor. The high levels of stress during these precarious times only contributed to his weight gain. He didn’t even have time to think about health or fitness till he stumbled upon an advertisement of our brand ambassador Akshay Kumar on a newspaper which changed his life!

The advertisement that Susant Dash saw was that of the GOQii Smart Vital. Being out on the field all day during a pandemic, he figured he could use a device which helped him track vitals such as body temperature, blood oxygen, heart rate and blood pressure. He purchased the GOQii Smart Vital which came with a 3 month subscription to personal coaching. Once he subscribed, he was introduced to his Coach, Yogita Sharma and his journey to a healthier lifestyle began.

Habits Introduced By His Coach

The changes that Coach Yogita Sharma introduced were quite basic. This included maintaining a 3 hour gap between his dinner and sleep time, timely meals and no oily food. She gave him a fitness regime to follow for a week which included 4 days of cardio, 2 days of strength training and 1 day of rest.

Now, his day starts at 6 in the morning with a glass of lemon water or methi seeds soaked overnight with water. He starts his workout at 7 and goes on for an hour. He tries his best to eat his breakfast, lunch and dinner on time. He has completely stopped snacking from vendors – fried foods being a major weakness. Along with this, he does 10 minutes of guided meditation every day before sleeping.

Thanks to making these minimal changes to his lifestyle, his weight has reduced from 103kg in September 2020 to 87kg now. He feels more energetic and active despite being out all day. He understood from his coach that exercise alone does not lead to fat loss. It has to be coupled with calorie restriction, proper diet and sleep – something that he was unaware about before being coached by Yogita Sharma, who guided him about what to eat, what to avoid, and most importantly, how to structure his meals.

With visible changes in his physique and appearance, he says he has grown more confident and feels good when he is appreciated by his superiors and his juniors at the station. He feels pleased that he has become a role model for his colleagues and has inspired many among them to take fitness seriously. He says, “I never imagined I could lose 16 kgs in 5 months. Thanks to GOQii this came true!”

What Does Coach Yogita Sharma Have To Say About Officer Susant Dash?

Officer Susant Dash joined GOQii on 13th September, 2020. When he joined our team, his weight was 99kg and he struggled with borderline high sugar levels, uric acid and high blood pressure, but was not taking any medication for the same. After our first discussion, we decided that we will try lifestyle modifications to correct these parameters before starting medication.

Over a period of 4 months, he has lost 10kg of weight and as per his latest reports, his blood sugar, blood pressure and uric acid levels are all well within normal range. Overall, his energy levels have improved and he feels fresh throughout the day.

Does the story of Officer Susant Dash inspire you to make a lifestyle change? Then download the GOQii App and subscribe now! To read more inspirational stories, check out Healthy Reads.

We’ve always advocated that lifestyle diseases can be managed with a balanced, healthy and holistic lifestyle but can they also help you manage a terminal condition? Our Player Ananda Mukherjee, with help from his GOQii Coach, was able to battle such a … END_OF_DOCUMENT_TOKEN_TO_BE_REPLACED