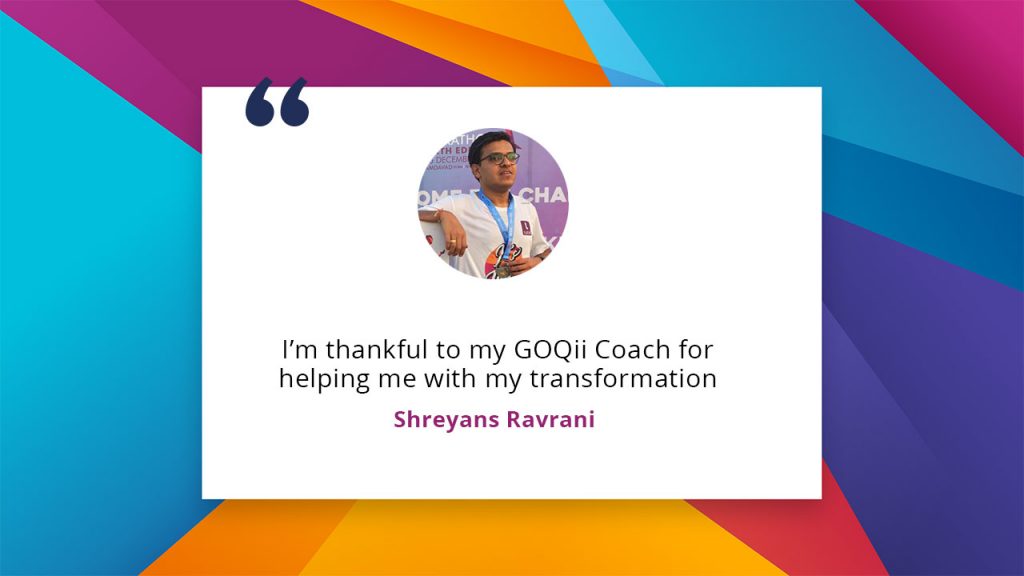 At the age of 38, Shreyans Ravrani led a lifestyle which wasn’t very different from the working professionals of his age group. As a Gujarati, his diet involved regular consumption of oily food and sweets, something he never realized can be detrimental to his health. He didn’t maintain portion control nor eat a balanced meal. Physical activity was almost nil and to add to it, his stress and sleep were negatively impacted due to work pressure and traveling.

He had joined GOQii in 2017 as he found the personal coaching feature appealing but did not stick to his plans or take being healthy seriously. In June 2019, Shreyans Ravrani was diagnosed with high cholesterol and fatty liver disease. He was faced with 2 options – either live with the prospect of lifelong medication or adopt a healthier lifestyle. He chose the latter and his life changed since then.

Shreyans Ravrani realized he had to reduce his weight. He weighed 77kg with a BMI of 29. In order to get healthy, he renewed his subscription with GOQii in July 2019 and got more serious about utilizing personal coaching. He already was consulting a dietitian and he started to validate all her suggestions and inputs with his GOQii coach.

These were the changes he incorporated:

As a Jain, he was used to fasting which helped him control his hunger pangs even as he reduced his meal portion. He says, fasting gives you mental strength and distracts you from the thought of food, which he was able to do successfully.

Levelling Up The Game!

By November 2019, Shreyans Ravrani participated in and completed his first 10k run within 65 minutes. In December 2019, he did it again but completed it in 60 minutes. He was happy that he managed to beat his previous time so quickly.

Between July – November 2019, he had reduced 14kg. Seeing this, his coach had to ask him to cut down on his running and add some strength training routine to his workout. He ensures that he completes his quota of running by spot jogging at home even during lockdown!

He regularly participates in health challenges organized by GOQii with the GOQii App from time to time including the current 30 Day Quarantine Burn Challenge.

What Does Shreyans Ravrani Have to Say About His GOQii Coach?

Shreyans is extremely thankful to his GOQii Coach for her contribution towards his transformation. He thinks the best part is that he can ask questions as and when they arise in his mind and get them answered by an expert quickly. She is also a constant motivator, following up with his habits, progress as well as guiding him in the right direction. He feels it helps when you have someone monitoring your habits and giving you timely feedback.

What Changes Does He See in Himself?

Apart from weight loss and his vitals returning to normal, he says the complete change of mindset towards health and fitness is worth it! His entire family is now more aware and diet conscious. Every member makes sure to burn off extra calories as and when they indulge.

Do you want to make a lifestyle change as well? Download the GOQii App and subscribe now.

We’ve always advocated that lifestyle diseases can be managed with a balanced, healthy and holistic lifestyle but can they also help you manage a terminal condition? Our Player Ananda Mukherjee, with help from his GOQii Coach, was able to battle such a … END_OF_DOCUMENT_TOKEN_TO_BE_REPLACED