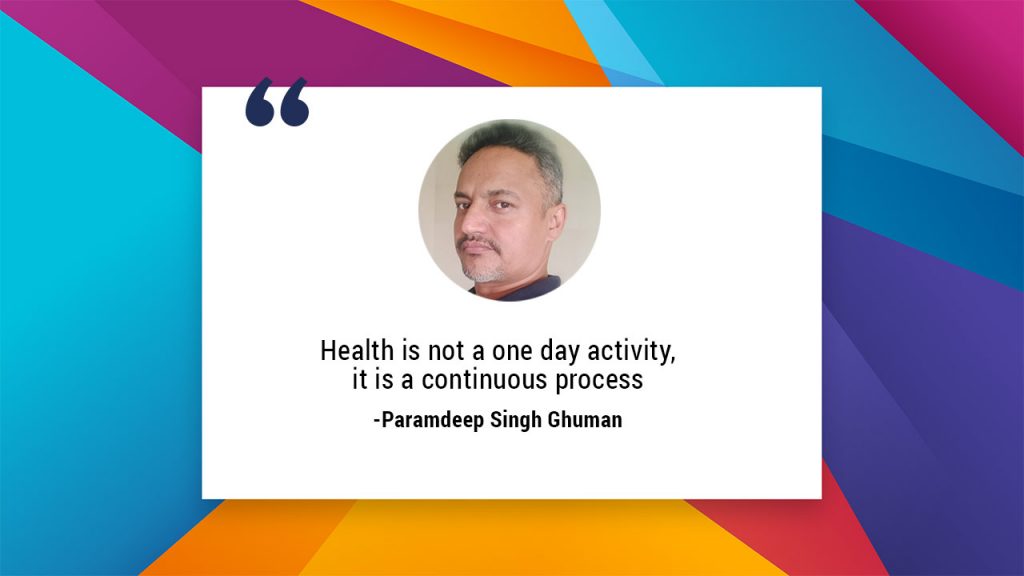 Does health really need to take a backseat when you chase your professional goals? And if you do recover, work on your health, get active and fitter, how do you take it to the next level? Do you train harder or do you influence those around you to be better? Our GOQii Player and Champion of Chandigarh Paramdeep Singh Ghuman found the answers to these questions!

As with every high profile working professional, Paramdeep Singh Ghuman was unable to focus on his health. He used to actively participate in sports during his college days but once he began working, everything else took a backseat.

He became a workaholic and immersed himself into work without thinking about his health, diet or sleep. As a result of neglecting his health, he was diagnosed with high blood pressure (140/100) and cholesterol (250). To add to this, he suffered from constipation and disturbed sleep.

His doctor advised him to start with some physical activity and lifestyle changes. Taking his doctor’s advice, he started walking for 20 minutes a day at a nearby park. After a while, he became inconsistent and fell back to his old habits. As soon as that happened, the fear of heart-related ailments crept in. He began exploring other options to track his activity, steps and someone who could monitor his eating habits.

He was determined to change!

Paramdeep Singh Ghuman’s friend, who was employed with Axis Bank, introduced him to GOQii in February 2017. This proved to be a turning point for him. His journey began with a little bit of myth-busting and a lot of hard work! Paramdeep believed that a heavy breakfast like paratha with ghee and curd was ideal to keep him going throughout the day. This, along with his other perceptions on nutrition was corrected by his coach.

He was asked to drink lemon with warm water in the morning and eat nuts that were soaked overnight. After his morning exercise, he ate muesli with milk. Once he reaches office, he had to eat either raw paneer or boiled eggs. He began including salads in his lunch and dinner, fruits for mid-morning snacks and an apple or banana milkshake in the evening.

On the exercise front, he was advised to start walking again. Initially, he did complain of pain but his coach reassured him that it was because his body is still getting used to being active. After 3-4 months, he began running for a kilometre which gradually increased to 5km and further to 10km. He improved his stamina with strength training and HIIT.

Changes and Champion of Good Health!

As of today, Paramdeep’s blood pressure, as well as cholesterol, are both under control. He is completely off medication. His sleep has improved and his constipation issues are now a thing of the past!

His weight has reduced from 90kg to 83kg. He feels stress-free, happy and content with his life and the changes introduced by his GOQii Coach. He regularly attends Dr. Paramjeet, Coach Parwage Alam and other nutrition classes on GOQii Play.

After seeing the impact of the changes that he made to his lifestyle, Paramdeep wanted to do the same for others. He now encourages community members and office colleagues to be physically fit – with many of them joining GOQii.

He says, “I feel it is my duty to give back to society, prep young guns to participate in some or the other activity, stay fit and healthy. I want to emphasize the importance of physical exercise and mindful eating to them.”

He is currently a GOQii Champion and heads the Chandigarh Chapter and thoroughly enjoys his assignments.

Did you find this story inspiring? Do you have a story to tell? Click here and we’ll reach out to you!

Imagine an event where each and every person has a unique tale to tell, despite having taken similar paths or adventures. Have you ever gone through it? We’re about to share the experience of Kamal Chandran, Group Head - HR at GOQii, who participated in the … END_OF_DOCUMENT_TOKEN_TO_BE_REPLACED