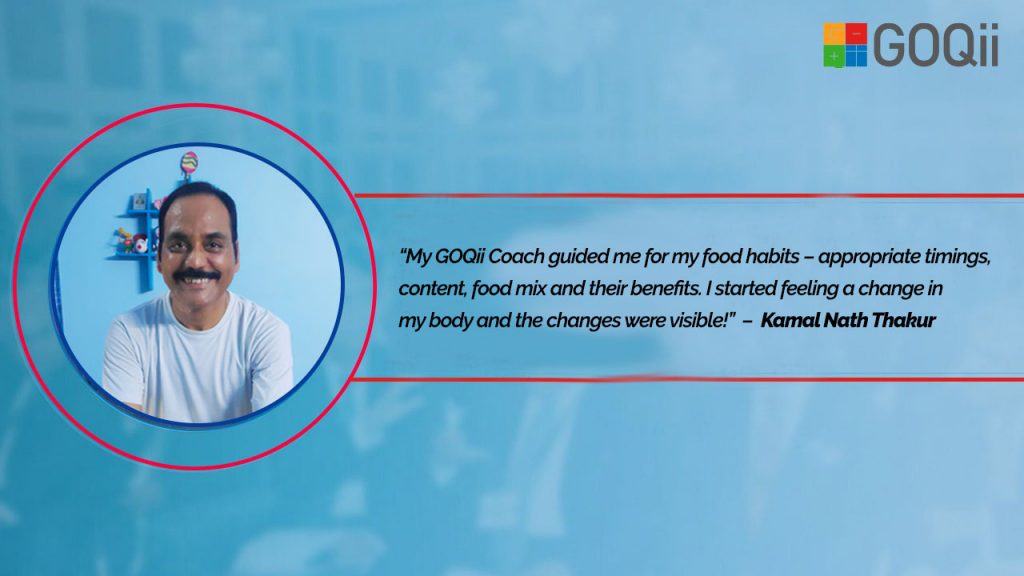 Engaging in physical activity is good. Sports do help us maintain our fitness but that’s not all when it comes to living a healthy, holistic lifestyle. You have to watch what you eat, your sleep timings and manage your stress well, to name a few. Our Player Kamal Nath Thakur was of the opinion that he was healthy until he met his GOQii Coach. Here’s how his Health Story unfolded!

Joining GOQii & Not Opting For Coaching

Kamal Nath Thakur is a 52 year old working professional from Ghaziabad. He is a badminton player and considers himself to be a fitness freak. He was introduced to GOQii in 2019 by his 14 year old daughter Kavya, who saw an advertisement in the newspaper.

Initially when he enrolled, he was of the impression that he knew all about health and fitness, hence, he opted out of personal health coaching and decided he did not need a coach. His decision was also influenced by the fact that he felt it was very difficult for him to follow the habits suggested by a GOQii Coach.

While he opted out of coaching, he participated in various challenges issued in the GOQii App such as the steps challenge, health quiz and even browsed through Healthy Reads.

In April 2021, Kamal Nath Thakur had contracted COVID and was hospitalized for almost a week. He had lost 10kg and began experiencing regular pain in his right leg. During this time, he was contacted by a GOQii Coach for personalized health coaching. Considering his condition, he opted for the service and says that it was one of the best decisions he ever made!

Initially, he was coached by GOQii Coach Prachi, who guided him regarding his food habits in terms of the timing of his meals, food content and mix and the benefits he would derive from it. He says, “I started feeling a change in my body. It was visible”.

Since then, he has been extremely particular about his food intake, nutritional value and how and when he should eat, which foods to avoid and so on. Kamal Nath Thakur says, “She was wonderful in explaining everything in detail”.

After a while, he was assigned Coach Pradnya. He discussed his persistent right leg pain with her. Coach Pradnya suggested some leg stretching and leg strengthening exercises he should follow. Kamal Nath Thakur found these exercises to be extremely helpful. He says, “It was a boon for me in the hour of need. With her guidance in almost all fronts, like healthy food habits, regular suggestive exercises, relating to healthy reads, I had become a completely fit man with working knowledge of how to keep myself healthy”.

He says that his habits changed tremendously after joining GOQii. Where he would usually complete a target of 3,000-4,000 steps, he now clocks in 15,000 steps daily. Before, he wasn’t particular about his food habits but now he focuses on the time and composition of his meals. He also follows and attends classes on GOQii Play.

Coach Pradnya has been in touch with him daily and guides him via chat or call. She advises him as per his requirement. He says that it has been a fun change for him. He is a health champion in his organization and has even recommended GOQii to two of his colleagues who are now using the wearable and the app.

Our Founder & CEO Vishal Gondal recently spoke to Kamal Nath Thakur about his experience with GOQii on the latest episode of GOQii Health Stories where we feature players who have benefitted from personalized health coaching. You can view the whole conversation below:

What Does GOQii Coach Pradnya Have To Say About His Change?

“Kamal was following a healthy lifestyle including healthy, timely meals and daily walking. He was having pain in his right thigh after recovering from COVID. Though it was unusual, we decided to try leg stretching first. I also suggested ginger detox water to reduce the pain naturally. Ginger being anti-inflammatory has pain reducing effects. He felt a lot of relief.

As he spends a lot of time sitting in the office and the car while traveling, it might have led to stiff muscles. After a few days, we started leg strengthening exercises to strengthen his leg muscles. It helped him cure almost all the leg pain. Now, he is confidently working to improve his immunity further, doing full body exercises and eating healthy meals.’‘

Kamal Nath Thakur and his family are truly a GOQii Family with his wife Sangita, daughter Kavya and son Ketan – all being GOQii Players. From merely being fit to being in the Elite category within a year’s time shows his discipline, consistency and dedication to being fit and healthy!

Do you relate with this story? Do you want to make a lifestyle change like the way Kamal Nath Thakur did? Then join GOQii’s personalized health coaching and begin writing your Healthy Story today! You can subscribe here: https://goqiiapp.page.link/bsr

Imagine an event where each and every person has a unique tale to tell, despite having taken similar paths or adventures. Have you ever gone through it? We’re about to share the experience of Kamal Chandran, Group Head - HR at GOQii, who participated in the … END_OF_DOCUMENT_TOKEN_TO_BE_REPLACED