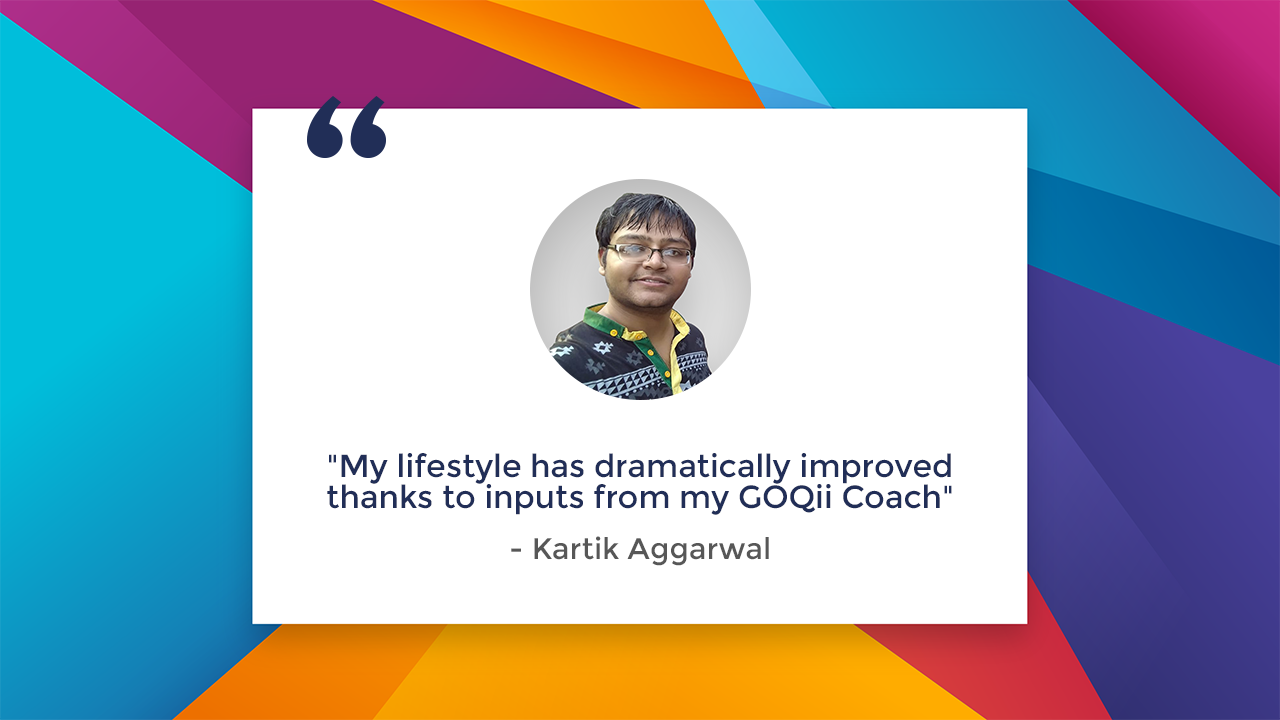 Has fitness ever taken a backseat with you? Have you ever been active in the early days of schooling but as life and work caught up, your lifestyle became more sedentary? Did junk food and aerated beverages replace delicious, home-cooked meals? While it is comforting to know that you’re not the only one, somewhere it has to stop. At some point, you need to stop and question your lifestyle choices. You need to make a lifestyle change just like our player Kartik Aggarwal did.

Kartik Aggarwal was always into sports. Since school, he was quite active. He has even represented his school in rollerskating. After graduation, work consumed most of Kartik’s time. Fitness became an alien entity to him. Health became secondary. He began skipping meals, his water intake was low and he treated himself to carbonated drinks more than often.

How Did GOQii Help?

Kartik Aggarwal had initially joined GOQii to study the application. He wanted to understand how the interface and the fitness tracker works. As the case with all new players, Kartik was asked to set a goal. His goal was to lose weight and maintain a healthy lifestyle.

He began by regularizing his meal timings. Every morning, he drank a jug full of water. He completely cut off tea and coffee. If he craves for aerated drinks, he has buttermilk or lemonade. On the fitness front, he exercises 5-6 times a week. He works out either in the gym or takes a walk in a park nearby. Kartik has begun taking the stairs and avoids elevators or escalators.

Given his busy schedule, Kartik Aggarwal manages to take short walks every hour or so. He tunes in to Ronak Gajjar’s Meditation Class on GOQii Play as that’s the only show he can squeeze into his schedule.

After being active on the GOQii app, Kartik Aggarwal received an email from GOQii. The email was for an Active Sunday registration. He signed up and has never looked back. Since then, Kartik has been a one-man army who regularly champions the GOQii Active Sunday sessions in Ghaziabad.

What Did Kartik Aggarwal Have To Say About His GOQii Coach?

When asked about his coach, Kartik said that his GOQii Coach has been really helpful. She persistently follows up with him to complete his habits, despite the fact that he is not active on the app due to commitments from work. Although he doesn’t even get the time to check his phone, thanks to her dedication, he has been following his habits as much as possible.

Since joining GOQii, Kartik has lost about 7 kg. He says that his lifestyle has dramatically improved, especially his eating habits, thanks to inputs from his GOQii Coach!

Kartik will be live on GOQii Play soon. Tune in to his show to know more about his journey to a healthy and active lifestyle!

Does being sedentary after retirement sound familiar to you? Could be you, a loved one or someone you know. J Ravichandran, a 63 year old retired CA from Chennai, experienced the same. As a CA, his work involved a lot of traveling - which kept him active. … END_OF_DOCUMENT_TOKEN_TO_BE_REPLACED