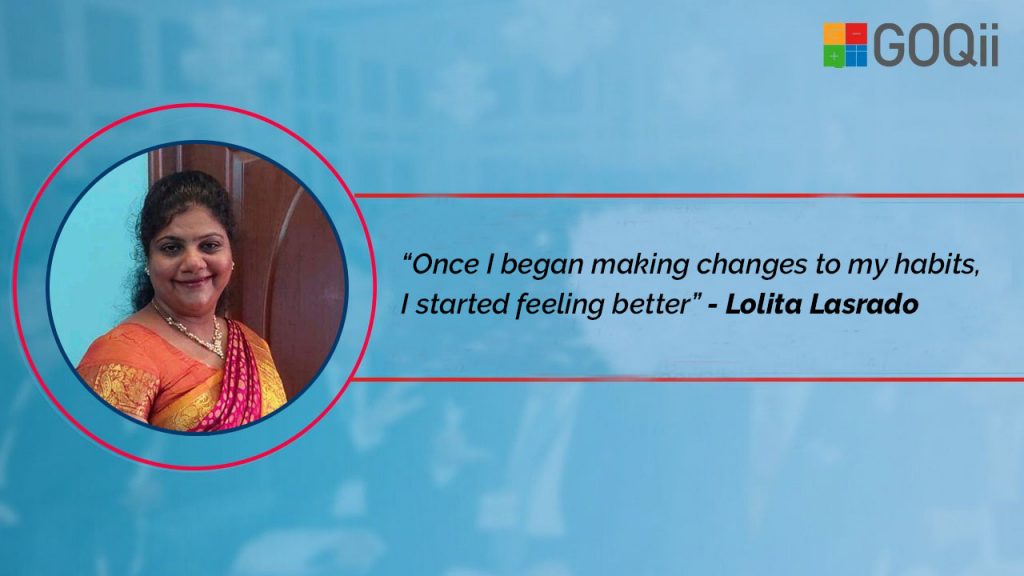 Do you avoid eating certain kinds of food because they trigger issues like acidity, bloating, gas or some sort of discomfort? You’re not alone! Our Player Lolita Lasrado suffered from similar issues but was able to overcome them with some lifestyle modifications suggested by her GOQii Coach. Here’s how her health story unfolded.

Lolita Lasrado is a 38 year old housewife based in Mangalore. For the longest time, she suffered from gastric issues such as acidity, gas and bloating. She couldn’t eat nuts, potatoes and vegetables such as cabbage due to her gas issues. She only stuck to eating fish curry and rice.

“I had gas and bloating issues for a very very long time. I could hardly eat anything. I had to be careful of what I ate so that it does not create gas issues,” says Lolita.

Lolita was quite athletic and had been a Shot Put thrower  but couldn’t continue after marriage. Later, she gave birth to 3 boys, which kept her too busy and occupied to think about herself or her health issues. She says, “ I am a busy mom. My time is spent looking after them.”

Taking The First Step Towards Change

Owing to 3 pregnancies and her gut issues, she gained a lot of weight. She weighed 93kg a year ago and had also developed a large tummy which she wanted to reduce, but had no solution for, till one day, her brother-in-law gifted her a GOQii Device.

Initially, she had no idea what the smart tracker and the integrated GOQii App could do but she liked the device because it helped her track her steps daily. She finally subscribed to GOQii’s personalised health coaching in October 2021.

When she realised that there was actually a personal coach who would guide her, she decided to set a health goal – which was to reduce belly fat and get over her gastric issues.

Her Coach Bhawna Garg understood her issues and slowly began making changes to her lifestyle. At first, small habits such as eating soaked nuts in the morning, healthy snacks in the evening and roasted jeera with a pinch of hing at bed time, were introduced. Later, ginger, turmeric and lemon tea was also added to her routine.

Gradually, Coach Bhawna Garg introduced Lolita to portion control in her meals. Rice and wheat was cut down from meals and instead Jowar/Ragi (millet) rotis were introduced. And there was an increase in her protein intake.

In terms of exercise, her coach asked her to perform plank exercises, starting with 10 seconds to gradually holding it for a longer time. Lolita also began walking on a daily basis, covering approximately 15k steps.

However, despite all these dietary changes, at one point her weight did not budge but she didn’t lose hope. Her Coach started her off on a detox as well as a new workout plan which consisted of strengthening exercises and avoiding rice and wheat for 15 days. This worked and her body began responding.

What Were The Changes That Lolita Lasrado Experienced?

“When she came on board, she weighed 93kg and her waist size was 38”. She also suffered from gastric issues. The few changes in diet and a few daily habits that I created for her and ensured she followed, helped a lot. Now, her weight has reduced to 78kg and her waist is at 36”. Her acidity and bloating issues are gone for good. She has often told me she feels more energetic and healthy. Working with her has been very easy for me because she is consistent and follows each and every habit I set for her diligently,” says Coach Bhawna Garg.

This goes to prove that despite issues and hurdles, if guided well and if one follows that guidance and sticks to their health goal, nothing is impossible! Lolita Lasrado continues to write her health story with help from her GOQii Coach and is looking forward to achieving all the health goals she has set for herself.

Do you relate to this story? Do you want to make a positive lifestyle change too? Then subscribe for GOQii’s personalised health coaching service here: https://goqiiapp.page.link/bsr

While the lockdown was a great move to curb the spread of COVID-19, it affected the health and lifestyle of a lot of people. Those leading active lifestyles had to be homebound and this led to the development of certain ailments that affect them even today. … END_OF_DOCUMENT_TOKEN_TO_BE_REPLACED