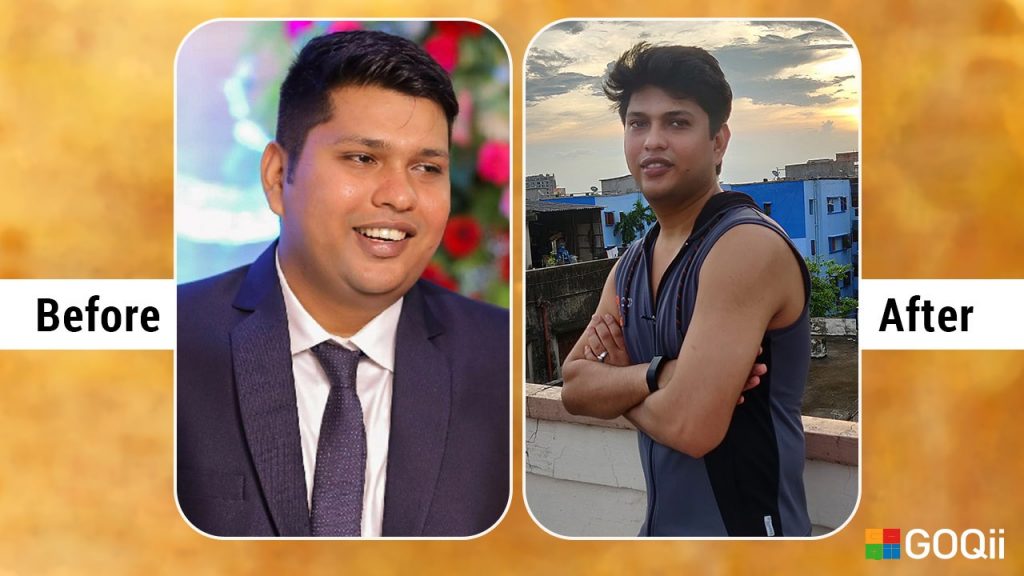 Life is full of unexpected twists and turns and as you age those twists and turns keep getting narrower. But as long as you are determined to pull through, nothing can stop you. And sometimes all you need is a helping hand. The story of our player Chandan Tiwari is one such example.

Now 28 years of age, Chandan Tiwari used to be quite active in sports during his youth. He represented his school and college in cricket. He was lean, fit and weighed 74kg. However, once he began working in 2016, his life got caught up in the twists and turns of a working individual and he found himself working for 14-15 hours a day backed by lack of sleep, unhealthy eating habits and lack of physical activity. In 3 years, he gained 22kg and also suffered bouts of depression with his confidence being at an all time low. He says he is not sure whether depression led to all the unhealthy eating and weight gain or was it the other way round. He faced frequent health issues like cold and fever, stomach issues and skin allergy. He was diagnosed with fatty liver too during one of the medical tests conducted in 2018.

Chandan was introduced to GOQii by his brother who is also an active user and had undergone a transformation due to lifestyle changes introduced by the coach. He joined GOQii in August 2019 and his life took another turn – this time for the better.

The first thing his GOQii Coach did was explain the importance of a slow and consistent approach to fat loss rather than changing his lifestyle completely. So he started slowly. The changes introduced by his coach included:

Later, his GOQii Coach also introduced habits such as:

In 2 months flat, Chandan was able to lose 10kg. This motivated him to be more dedicated. He says it was initially difficult to abstain from his normal eating habits as all the sweet cravings were hard to control but he pulled through. He proudly says he has not touched sweets in the last 5 months.

The other changes he experienced include:

Thanks to all these changes, he now weighs 74.5kg. His fatty liver condition is completely cured. His thyroid is under control although he is still on medication. Right now, he feels more positive, confident and energetic even after 11 hours of work. Apart from interacting with his coach on a regular basis, he has been regularly buying products from the GOQii Health Store.

Do you want to make a positive shift too? Well, download the GOQii app and subscribe now! To read more inspiring stories, check out Healthy Reads.

Sandeep Gupta is 55 years old and is a businessman who renders services to the Ministry of Defense. He was overweight at 86kg and suffered a lot from gastric and chest pain. This continued for 5 years and he was on medication as well. However, in the past 6 … END_OF_DOCUMENT_TOKEN_TO_BE_REPLACED