Weight loss is often a mental challenge rather than a physical one. If you can focus and not drift away from your goals, more than half of your work is done. This is Tanay Rawat’s story on how he did it? 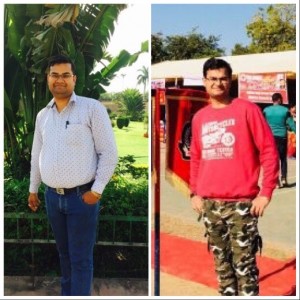 Tanay Kumar Rawat’s goal was to achieve a normal BMI index, which required him to reduce his weight significantly. Also suffering from ENT disorders and constipation, breaking the mental barricade and gaining self-confidence was the first step Tanay adapted, towards his road to success.

“My primary health goal was to reduce my weight and achieve a normal BMI index, being subjected to ENT disorders and constipation didn’t make this task easier for me. The hardest part was to gain a sense of belief in myself and from there it was a less bumpy ride.

My coach Manmeet ma’am had planned a diet for me which required me to consume fewer carbs, fried food, and other junk items. Green salads, seasonal fruits, and a few chapatis became a regular in my everyday diet. It was also required that I walk for 20 minutes, a few minutes past my breakfast, lunch, and dinner. Other exercises in the regime included brisk walking of 45 minutes and some full body exercises.

Initially, walking for upto 20 minutes post dinner, I gradually brought the scale upto 1 hour per day. My diet was strictly supervised and controlled with minimum oil and fried food consumption. I reduced the intake of chapati’s ( flat bread) from 4 chapattis (flat bread) to 2 and mostly consumed only Vegetables, Dal or Milk as dinner. I also added salad’s and fruits into my diet and consumed them almost every day.”

Before joining GoQii, fried samosas and pakodas were a major part of Tanay’s, everyday diet. As far as walking and exercising were concerned, let’s just say his body received very minimal activity, leading to weight gain and other disorders. But those days are far behind him, integrating brisk walking and a healthy diet into his everyday life, Tanay has adapted a more disciplined way of life. When we asked him to comment on his achievement, this is what he had to say, “I have been able to reduce about 25kgs within 200 days of my new regime and I’m very proud of my achievement.”

Like every other individual out there, Tanay possessed the power to reshape his life and knew only he alone could better the quality of his life. This is a tale of self-belief and determination, which enabled Tanay to break free from his emotional bulwarks and make a difference.

“At 41 years of age, reducing 25 kgs looked like a herculean task. Tanay’s determination was what inspired me to help him throughout. We started off by increasing his fiber intake, in the form of fruits and salads. Cinnamon water, flax seeds, and other healthy snacks were also introduced to Tanay’s diet. Brisk walking for 30-45 minutes every day was now a daily routine in his life. To improve Tanay’s sleep quality he was asked to consume nuts and drink a glass of milk before going to bed. The result was marvelous, Tanay burned 25kgs and reduced 2 inches from his waist and hips each. His stamina and immunity considerably increased and also felt very relieved of his ENT problem.”

Tanay is very active, determined, focused, and dedicated to his goal. He clocks more than 16 k steps daily, do yoga and meditation, consumes 3.5 liters of water daily and covers the distance of 12.5 km on an average day. His main area of concern was his weight, belly inches, and the stress. As a dedicated player, he started the walking and yoga right from the day-1 and never skipped a single day except for the traveling days. His food, steps, water log etc. everything is up to date never ever skipped even a single day without syncing the band. Each day’s food log right from the day it was told since August -17 is uploaded with the pics. Now he knows to controls portion and knows to compensate if he indulges once in a while. He joined with 103 kg and now he is 78 kgs. Initially, his diet was very low in proteins.

I tried to focus on his diet and also suggested him exercise to strengthen his core. I counseled him on choosing the healthy foods from the available choices. Als,o his dinner was made to be more on complex carbs and protein rich.As a coach, I am really glad to see his progress.

At the age of 38, Shreyans Ravrani led a lifestyle which wasn’t very different from the working professionals of his age group. As a Gujarati, his diet involved regular consumption of oily food and sweets, something he never realized can be detrimental to his … END_OF_DOCUMENT_TOKEN_TO_BE_REPLACED