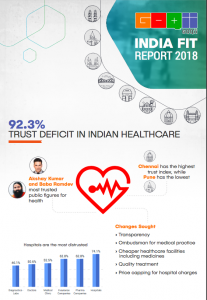 An alarming new report from GOQii, the smart preventive healthcare company has revealed the trust index that Indians have on the healthcare system and the extent of the health crisis facing the citizens of this country. The key findings paint a grim picture of the Indian healthcare system as well as of the average Indian as being inactive, an overweight adult who has gut issues and does not eat healthily and has several nutritional concerns.

On the Trust index, the report that is based on data collated over the last one year from 200,000 subscribers of GOQii both male and female found that 92.3% don’t trust the healthcare system in India including doctors, hospitals, Pharma companies, Insurance companies, Diagnostic labs, etc. The report collected data from across India’s 8 fitness conscious cities namely Ahmedabad, Bengaluru, Chennai, Delhi-NCR, Hyderabad, Kolkata, Mumbai and Pune.

India being a celebrity-crazy country and Bollywood celebrities are revered akin to God. One such celebrity is actor Akshay Kumar who is well known for his healthy lifestyle. So when asked which celebrity’s advice they would pay heed to when it comes to health, ‘Akshay Kumar’ was top of the charts as the most trusted celebrity/public figure for health advice, followed by Baba Ramdev, a yoga guru.

Vishal Gondal, Founder and CEO of GOQii commenting on the report said, “Indians are no longer silent or docile patients, but instead they are now well-informed consumers keen to participate in the care process and demanding dignity and transparency from the healthcare providers. This shift will play a significant role in the evolution of healthcare system in the country.”

The changes people would like to see in the healthcare system

The India Fit report 2018 has captured real fitness and health insights. The new addition this year is BMI. India Fit Report 2018, indicates that weight is a major concern with approximately more than 55% of the population overweight. Both men and women have a similar pattern of being overweight. 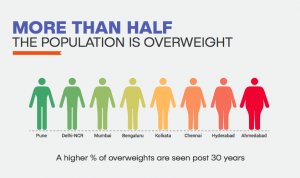 A higher % of overweight individuals are seen among people above 30 years. Ahmedabad, Hyderabad, Chennai and Kolkata, have the most people who are overweight. One of the reasons why these cities have the most illness and health concerns.

Another cause for concern that the report indicates is the fact that the average daily step count of an individual across India is 6126 steps, a drop from last year’s count of 7746 steps. The recommended daily step count by World Health Organization to lead a healthy lifestyle is 10,000 steps. 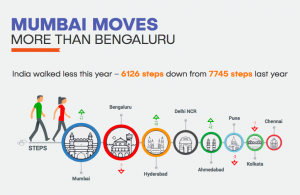 While Mumbai surpassed Bengaluru this year for the first rank with an average step count of 6488 steps, Bengaluru tops the chart as the healthiest city in India. Chennai stays at the bottom of the list where step count is concerned and is also is the unhealthiest city. Despite having a predominantly younger population tracking steps in Chennai, the step count is low at 5605 steps daily average. 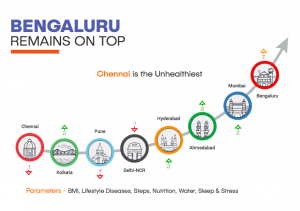 This year the GOQii India Fit report has added a new dimension to its analysis to include the quality of air, as Indians, especially in the Delhi-NCR and Gurgaon region, are increasingly breathing polluted air.

While Indians are striving to be fit, chronic lifestyle diseases such as diabetes, cancer, hypertension etc are a cause for concern. It is estimated that around 130 million may suffer from lifestyle diseases such as diabetes in the next few years. The disruptive lifestyle changes in the country due to a rapidly evolving urban economy and Indian middle class have resulted in the increase in chronic diseases. 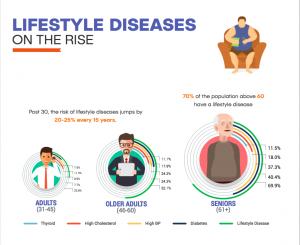 In comparison to last year, there has been a rise in the number of lifestyle diseases among people. Diabetes has increased from 7.7% to 7.9%. Also, more Indians have high cholesterol this year increasing from 9.4 to 10.1%.  With age as well people are more prone to lifestyle diseases. 23.8% people below the age of 45 have one or more diseases such as diabetes, cardiac problems including high cholesterol, blood pressure, thyroid and Cancer. Post 45 years this has doubled to 52.1%.

“Over the years, there has been an increase in the number of chronic diseases due to the disruptive lifestyle changes in the country. Lack of exercise, erratic eating habits, increase in stress levels and poor sleep patterns are just some of the key reasons behind the increase of this epidemic,” says Gondal.

While earning a good livelihood is important, is it taking more life out of living? Long working hours, being seated most of the time with no physical activity and bad eating habits can take a toll on your health over a period of time. If this sounds … END_OF_DOCUMENT_TOKEN_TO_BE_REPLACED