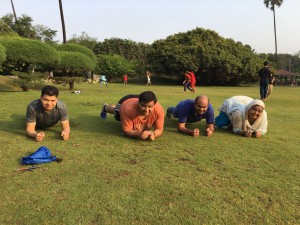 At 58, she is one of the most active members of the ‘GOQii Active Sundays’ held at Powai, Mumbai thereby proving that age can never be an impediment to start anything in life. If you are determined and have the will to put in hard work and bring about a change for yourself, then nothing is difficult. Safiya Begum has just done that. Here is her story…

Safiya Begum travels all the way from Mankhurd to Powai every Sunday morning along with her son Mohammad Ilyas. “The transformation in her has come in the last one year,” says her son and since then there has been no looking back for her.

She had a lung issue way back in 2016 for which she had to be hospitalized. After she was discharged from the hospital in her hometown, her son Ilyas had to get her to Mumbai and admit her again in Hinduja hospital in for a thorough check-up and she was categorically told that she had to control her weight and the lung issue was due to thyroid, Sugar and BP. She underwent 1-year treatment thereafter but, was not active and was on medication.

Ilyas had decided that he had to get his mother off medication and follow a routine of walking and some exercise. he got her to follow his routine which his GOQii coach had given him. The routine was to take walks outside. She started enjoying this routine and started going for regular walks.

Ilyas says, “There has been no looking back for my mom. She goes for a walk 3 times a day. Once in the morning, afternoon and evening.  I have even got her a GOQii tracker now so she can see her step count”.

Exactly six months ago in December, we got a check-up done. Her Thyroid medication has been reduced, Sugar levels are at normal level, BP is also under control. She has been asked by the doctor to take medication for BP only if there is a problem.  Since January 2018, she started attending the GOQii Active Sunday sessions and she is thoroughly enjoying the sessions. She has made friends with many of the active Sunday players and hence enjoys her group exercise sessions.

Safiya Begun has proved it that no matter what age if you are determined to change your lifestyle and be active, all you need is to put in efforts and not give up. There are no shortcuts to life.

Does being sedentary after retirement sound familiar to you? Could be you, a loved one or someone you know. J Ravichandran, a 63 year old retired CA from Chennai, experienced the same. As a CA, his work involved a lot of traveling - which kept him active. … END_OF_DOCUMENT_TOKEN_TO_BE_REPLACED