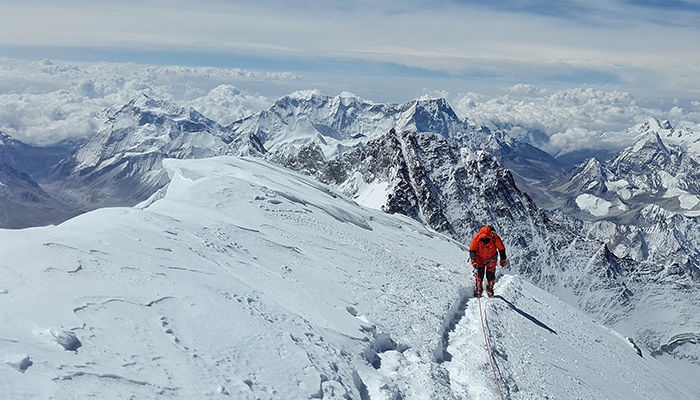 “Mountain Climbing is my life and Veganism defines me. However, Veganism supersedes Everest”, says Kuntal Joisher in a conversation with Vishal Gondal on his newly launched podcast ‘Vishal Gondal Show’- Beneath the Force.

From quitting his plush MNC IT job, reducing from 110 kg to 80 kgs to climbing some of the toughest mountains in just a span of 8 years, Kuntal, a Gujarati from Ghatkopar (a Mumbai suburb) stood on top of the world on May 19th, 2016 at 9:30 am as the first vegan.

Prior to Kuntal, there have been many non-vegetarians and vegetarians who have summited the highest peak in the world, but when Kuntal started his journey to scale the Everest it was unheard of that a vegan could climb as well. It was a natural scepticism as most climbers and especially those climbing 8000 meters peak are recommended meat and dairy rich foods. For a Vegan being on plant-based foods requires that much more hard training than a traditional climber it was concluded.

However, Kuntal has dispelled all myths. With no altitude sickness and fit throughout his 60 days climb, he has shown and inspired the world that mountaineering can be done on  healthy wholefoods vegan diet. For Kuntal its ethical reasons to be Vegan and not any health reasons to go Vegan. He says that Vegan food is not bad as everyone things. “Nor am I an extreme Vegan,” he says. But, he is so much of a Vegan that his Mountaineering Gear is 80% Vegan as well.

“My diet has never been an issue. I’ve been part of over ten serious Himalayan climbing expeditions, and I’ve never had any problems being a vegan, even on this last attempt to climb Everest,” says Kuntal. 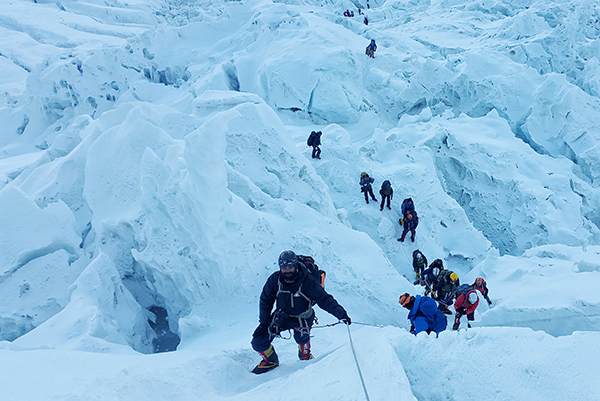 Kuntal in his in-depth conversation on‘Beneath the Force’ show talked about everything from his life, to his profession to how he decided to climb mountains and about a few life hacks that he uses to help himself.

Before climbing Everest, he scaled many incredible mountains in India and Nepal. Just to names some important ones he has climbed Mt Elbrus in Russia (one of the peaks of the Seven Summits) and Mt Manaslu, another 8000 mt peak in Nepal and is the 8th highest peak in the world. Kuntal is the only second Indian civilian after Arjun Vajpai to have scaled Manaslu.

On his achievement in Mountaineering and conquering Everest the third time around Kuntal says, “I have conquered my fear of height. Before climbing Everest I actually had the fear of heights.”  “If you win in your mind, you win over your fears”.

According to Kuntal, mountaineering is a combination of training and experience. One cannot leave anything to luck. One has to push themselves physically to get that mental edge. He admits and says, “While mountaineering is a risky sport and that I do take risks by climbing mountains but, I would in the same breath say that I am a very risk averse climber. In my 8 years of climbing career, I have trained so much and also gained considerable experience to be able to understand what is going wrong and take the right decisions”. He says, ‘getting up on a mountain is optional but climbing down alive is mandatory”. Most climbers get up and then become complacent. Most accidents in the mountains take place while climbing down. 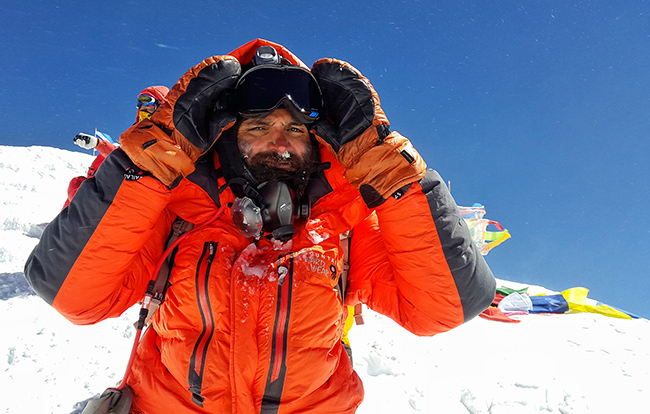 But, training for Everest was not easy. Kuntal emotionally detached himself from his family to be able to focus on his goal.

When asked both being vegan and being a mountaineer are two extreme things and isn’t it like being insane. To this Kuntalchuckles and replies, “Not at all. However, he adds, “I get my insanity from my dad. But, unfortunately, today, my dad cannot understand any of these insane things I do as he suffers from Dementia (LBD) for the last 15 years. Kuntal is working towards creating awareness about this disease in his own ways by climbing mountains. Kuntal says his dad also did some crazy things and went out of his way to do new things. His father used to farm earthworms.

One of Kuntal’s life hacks that helped him survive on his way up to Everest was ‘Oreo’ biscuits. Whoever knew that Oreo that people hog on is a vegan biscuit? Once at a high altitude above 26000 ft beyond the death zone and from camp 3 to camp 4 to summit and back to camp 2, Joisher ate only two Oreo biscuits he says. Towards, the summit, Joisher had Unived’s vegan energy gels. These gels contain electrolytes and carbohydrates that are instantly released into the blood. “They kept me going,” saysKuntal.

About the Vishal Gondal Show-Beneath the Force

The show encapsulates the lives of successful and inspirational people. The in-depth profile is the show staple — a nuanced look at a personality on a bi-monthly basis, revealing the person’s workout regimen, their struggles, their habits, thoughts on their latest project and, if we’re lucky, some as yet unrevealed factoid to file away in our collective unconscious. Whether we want to be like them, be with them, or just find out what it feels like to try on a different persona for a while, ‘beneath the force ‘we’ll always be drawn to Q&As about other people’s lives.If you want to get your fix of stories about fascinating lives but tired of staring at screens or loathe the paper pileup of discarded monthlies, listen to this podcast.

Does being sedentary after retirement sound familiar to you? Could be you, a loved one or someone you know. J Ravichandran, a 63 year old retired CA from Chennai, experienced the same. As a CA, his work involved a lot of traveling - which kept him active. … END_OF_DOCUMENT_TOKEN_TO_BE_REPLACED