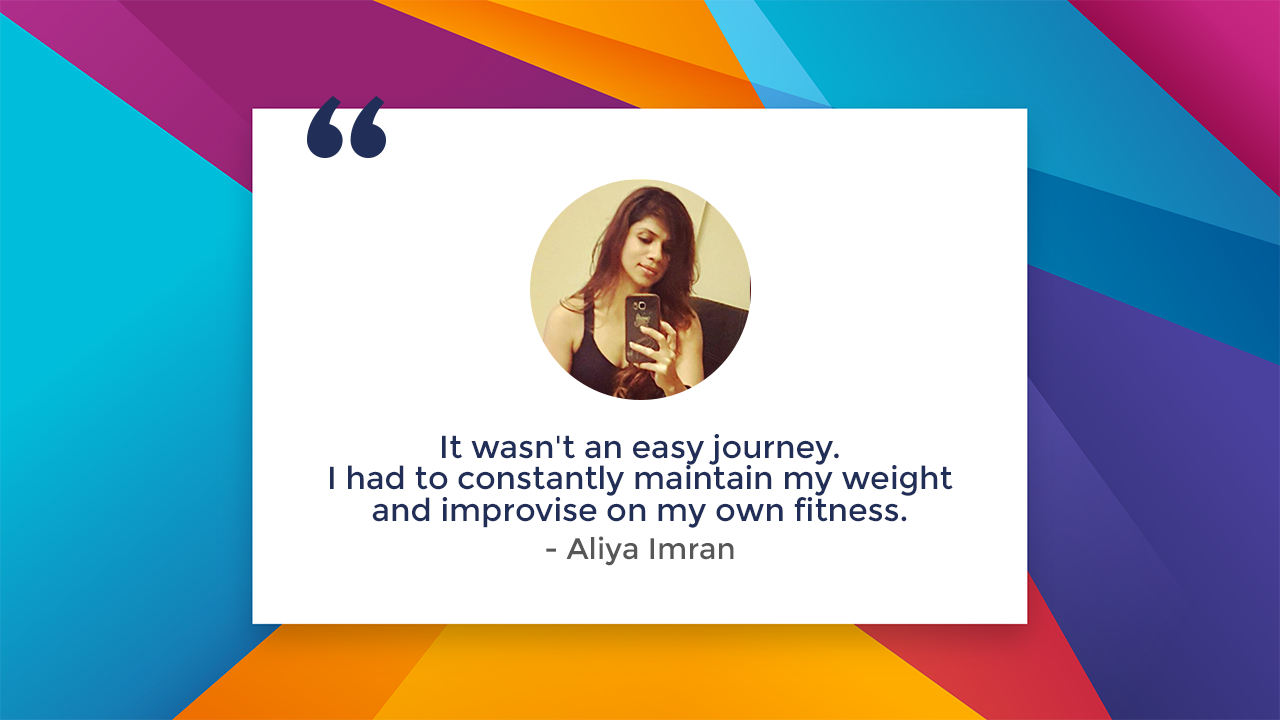 How many times have we come across movies or a television drama series where the protagonist defies all the odds, overcomes challenges and despite all the insurmountable hurdles, wins? We can’t ignore the obvious catharsis we feel and the emotional bonds we form with a protagonist’s journey. We can’t deny the overwhelming sense of joy we experience at their eventual success.

While we all love rooting for a beloved fictional character, we need to remember that there are real heroes out there who face their own struggles head on and emerge victorious. One such hero is none other than our GOQii Play Coach Aliya Imran.

Born in Mumbai, Aliya Imran spent some years in the city and then shifted to Vadodara. Although her schooling was normal, she did not experience a peaceful childhood. Despite her emotionally challenging circumstances, she was a healthy child. At the age of 13, Aliya was diagnosed with jaundice. It was so severe that no doctor was willing to admit her in their hospital. Stress coupled with a weak immune system triggered Vitiligo (A disease that causes the loss of skin colour in blotches) which became a permanent feature. Her Vitiligo increased and decreased with her stress levels.

She married at the age of 19, moved to Gurugram and completed her graduation. The trauma from a miscarriage at the age of 22 further aggravated her Vitiligo, causing it to spread all over her hands and face. She delivered her first child in 2009. Her weight had then increased to 79 kg. After being blessed with a second child in 2011, her weight further increased to 85 kg. Her Vitiligo issue hadn’t gotten any better.

She faced discrimination due to her Vitiligo issue. One such instance was during a pilgrimage with her family, a woman serving herself some food beside her threw the plate and walked away in disgust after looking at Aliya’s Vitiligo patches. By the end of 2013, she returned to Mumbai. At this point in time, Aliya felt completely hopeless about her weight gain issue as well as her skin condition. Something had to be done!

One fine day, she decided that she had enough! She thought to herself, “If I can’t fix Vitiligo, let me at least fix my weight!” She immediately joined a gym nearby. Not wasting a moment, she sat on the Spinning Bike and started spinning with vengeance! She didn’t have a clue about exercise or fitness and there was no one to guide her either. She just went with whatever caught her attention.

Soon enough, she began running along with working out. She performed high intensity cardio with a day’s rest, never skipped a single gym day for 3 months and managed to reduce 9 kg. Later, she returned to Gurugram, joined a college and completed an Interior Designing course. She joined a gym there as well. Obsessed with fitness, she used to do stair exercises before hitting the gym. Her family members and friends thought she had gone crazy but that didn’t stop her.

She slowly began weight training. She used to have only one meal a day without realizing that it was a fasting method. After attending one of GOQii Master Coach Luke Coutinho’s sessions, she found out that what she had been doing was Intermittent Fasting. This further encouraged her to fine tune her eating habits. She strictly avoided junk and outside foods and sought a high protein diet. 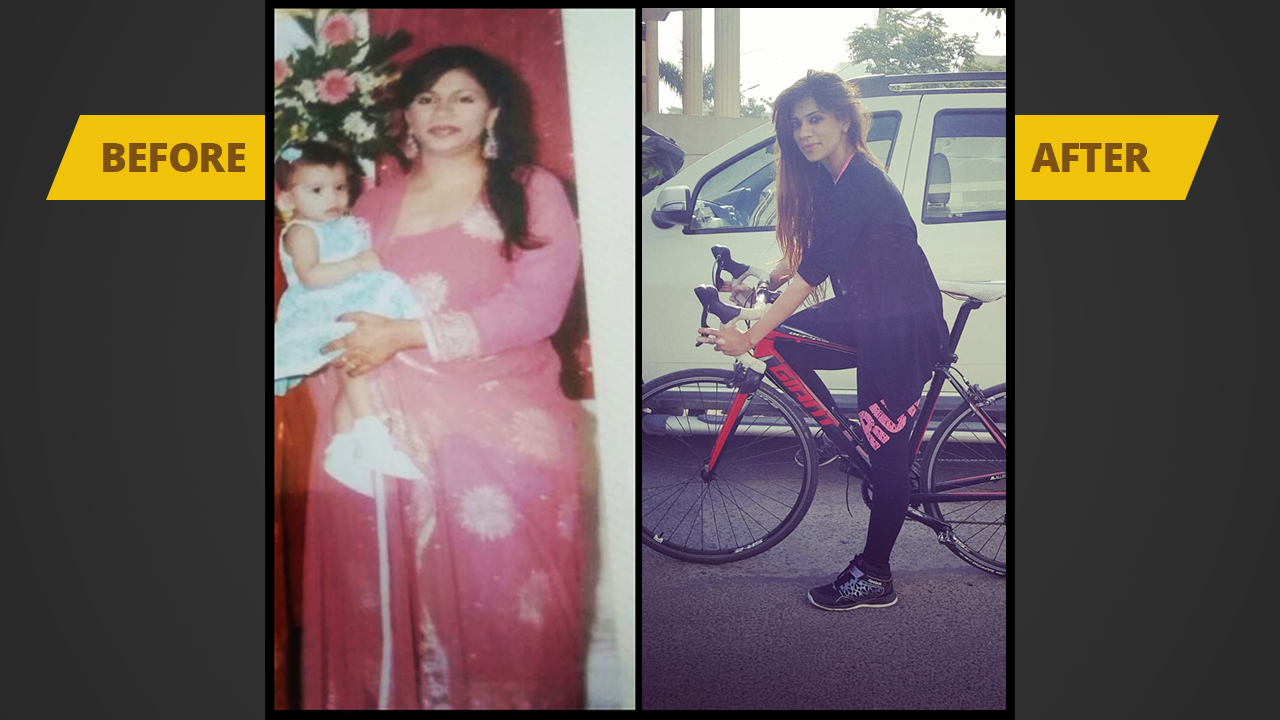 By the end of 2014, she weighed only 50 kg. She had lost 25 kg in a year without going on any crash diet. She achieved this through mindful eating and intense physical activity only. This gave a tremendous boost to her self-confidence, especially when her college and neighborhood acquaintances commented on her physique and unbelievable age.

One such instance of the boost in her confidence was when she was discriminated again for her skin condition. It was at a spa when an attendant refused to touch her. This was a similar situation as before but only this time, Aliya stood up for herself. Her confidence was sky high, never to be deterred again.

Around this time, gym instructors suggested that she take up fitness as a profession. They were convinced that she would be a success considering her dedication and hunger for fitness. Taking their advice, she completed her Zumba certification in 2016 and also got a spinning license. Between 2015-2016, she achieved professional success, accolades and was sought by leading gyms in Gurugram to join them as an instructor.

Aliya Imran shifted to Mumbai in 2017. She completed a few more certifications which included Pilates Training License and Reebok Training. Aliya also completed a certification in Personal Training and Nutrition from Dubai. She opened a home studio and began taking in clients, both from India and abroad.

In 2018, she acquired a Master Functional Training certification by ACE. Later that year, in September, she came to GOQii. She identified with the GOQii ideology that thrives on guiding and motivating people to lead a healthier lifestyle. The rest is history! Since joining GOQii Play as a coach, Aliya has had 1,734.3k views, 1,231k likes and has 183,347 players who have enrolled for her class! If that’s not amazing, then what is?

It wasn’t an easy journey to have come this far. She had to constantly maintain her weight from 2014 to 2019, improvise on her own fitness and at the same time bring variety and content to her clients. Aliya Imran attributes her success to her persistent efforts, her never-say-die attitude and the will to change without getting bogged down by limitations. She also thanks God for the tremendous support she has received from her family and her husband for motivating her.

We all face hurdles from time to time. If you have faced similar issues, know that there is always a way you can beat your circumstances and emerge as the best version of yourself!

Does this story inspire you? Are you motivated to move? Join Aliya Imran’s fun-fueled, energy-driven classes exclusively on GOQii Play. Download the app now: www.goqii.com/app

During this entire COVID-19 pandemic, one cannot deny the role that our frontline heroes – the police force have played by tirelessly working to ensure that lockdown rules were followed and providing assistance wherever required. While our unsung heroes do … END_OF_DOCUMENT_TOKEN_TO_BE_REPLACED