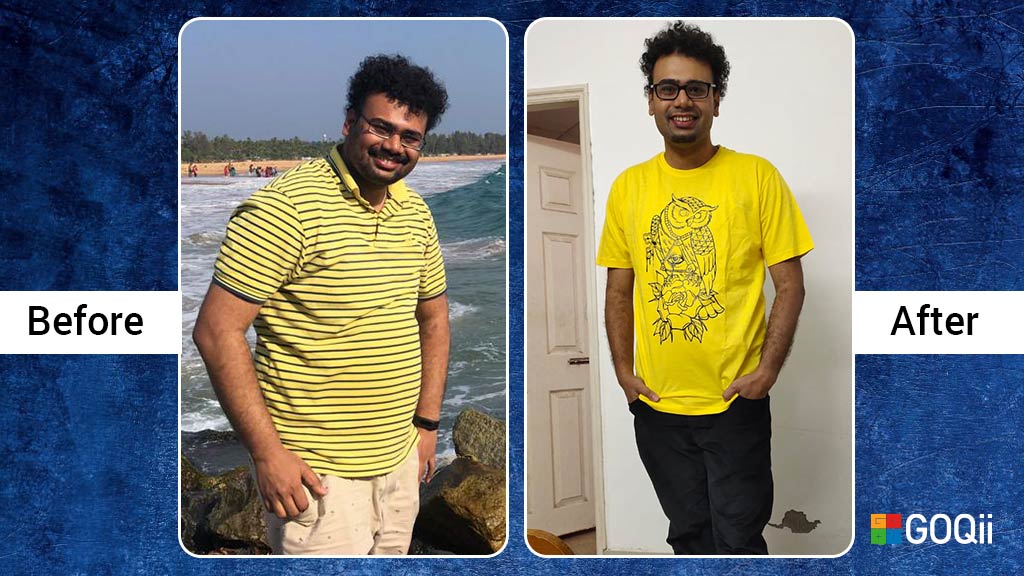 Do you want to make a positive lifestyle change but don’t know how? Does it take every ounce of motivation for you to move? Do you need a nudge in the right direction? These are all valid questions and you’re not alone. Sometimes, we want to begin something new but don’t know where to start. Our player Rishikesh Ayre, faced the same situation and found the answer with GOQii!

Rishikesh Ayre is a 28 year old software developer working in Coimbatore for the past 3 years. After college, when he began work, he had put on a lot of weight. He purchased a bicycle but couldn’t find the motivation to ride it. He says that he wanted someone who would question him, push and prod him to get active and reprimand him if he indulged in unhealthy habits too much. In short, what he needed was a person to monitor his health in a timely manner and tell him what to do and what not to do. What he needed was a coach.

As a part of his work, he was involved in a marketing research project on fitness gadgets and apps when he chanced upon GOQii. The personalized coaching service grabbed his attention. The human element and personal touch of a health coach intrigued him the most as such a service-based model was literally unheard of back then. He joined GOQii in November 2017 and has continued his journey since then.

Introduction to a Healthy Lifestyle

For the first 3-4 months, he was not very keen on interacting with his GOQii Coach. He had no definitive goals and no idea where to start. Then he got a new coach, Mubasheera in early 2018 and that changed everything. Coach Mubasheera was more proactive and gave him a clear roadmap on how to proceed.

His GOQii Coach noticed that his meals were heavy with bread as he consumed 5-6 slices every day in the morning coupled with evening snacks at the office cafeteria. He was asked to cut down on his bread intake. The second change was to take short walks after lunch, avoid the elevator and use stairs whenever possible.

He finally began riding his bicycle for 4km a few days during the week. Now, he rides 17-25km every day. He calls this his “Me Time”. It helps him clear his mind and uplift his mood. He also joined swimming classes which he attends during the weekends. Coach Mubasheera has asked him to keep varying his routine so it doesn’t get monotonous.

Staying Fit During the Lockdown

The lockdown, though painful for other reasons, helped him lose another 5 kgs. Before the lockdown, he used to go for a lot of outings and weekend parties with friends. All that had to stop and he was restricted to home-cooked, healthy meals. Also work from home meant he had the flexibility to do workouts suggested by his GOQii Coach whenever time permitted. He continued cycling near his home. Now he has almost got himself accustomed to the routine of morning workout and evening cycling throughout the week.

Thanks to all the efforts put in by him with the guidance of his GOQii Coach, Rishikesh Ayre went from 104kg in 2017 to 78kg now. He says that it wasn’t a painful journey at all. It has been so smooth and informative. He is now better informed and aware of what is good to eat and what needs to be avoided. He has learned about portion size and hunger control.

What Does Rishikesh Ayre Have To Say About His Coach?

Due to the long association, Coach Mubasheera has become like a friend to him. He says they have their fair share of fights and arguments especially over what he can order and what he cannot during weekends. He says, “Sometimes I have to literally click a picture of the menu card and send it to her so she can tell me what I can order. She has instilled healthy eating habits in me gradually and cleverly. For instance, she made me switch from bread-butter to chocos to muesli and now plain corn flakes + banana +boiled egg.”  He also commends her on how she made him give up on his ice cream after meals habit gradually. From ice cream once every 2 days, she switched to flavored yogurt to plain curd nowadays. He says the best part is he didn’t even realize he was giving up on these things. He is thankful to her for being patient and hand holding him gradually through this entire journey towards an active and healthy lifestyle. She has met all his expectations of daily motivation, support and information.

What Does Coach Mubasheera Have To Say?

Rishikesh Ayre is very determined and passionate now, but when he had started his journey, he was very fussy and lacked the willpower. We have been together in this weight loss journey for 2 years now. When we began, Rishikesh’s weight was around 103kg, and he has lost 16+ kg in 2 years (current weight is 81kg). The major problem with Rishikesh was hunger control, irregular timings, lots of cravings and binge eating on junk food + lack of physical activity and low stamina. We have successfully managed to include more than 1 hour of proper daily intense workout along with reducing processed food and managing hunger. His endurance and stamina has improved and he can do 20 push ups now (initially he struggled with 11-12). He cycles non step for 2 hours as well.

Rishikesh is a fussy eater (hates milk and is a coffee addict) but after lots of interesting challenges, such as the no sugar challenge, made him reduce 2 tsp of sugar to 1/2 tsp and has begun to include milk to his diet now as well. During the initial part of the lockdown, he suffered from disturbed sleep but that was taken care of with a few sleep hygiene practices. Our long term goal now is to maintain healthy weight and continue with an active lifestyle!

Does the journey of Rishikesh Ayre inspire you to begin yours? Head over to the GOQii App or our website to begin your journey today! For more inspiring stories, check out Healthy Reads.

Does your work revolve around traveling and leaves you with little time to focus on your health? Sandeep Vasant, a marketing professional from Bengaluru had the exact same issue till he decided that it was time to change.  In 2016, Sandeep Vasant weighed … END_OF_DOCUMENT_TOKEN_TO_BE_REPLACED