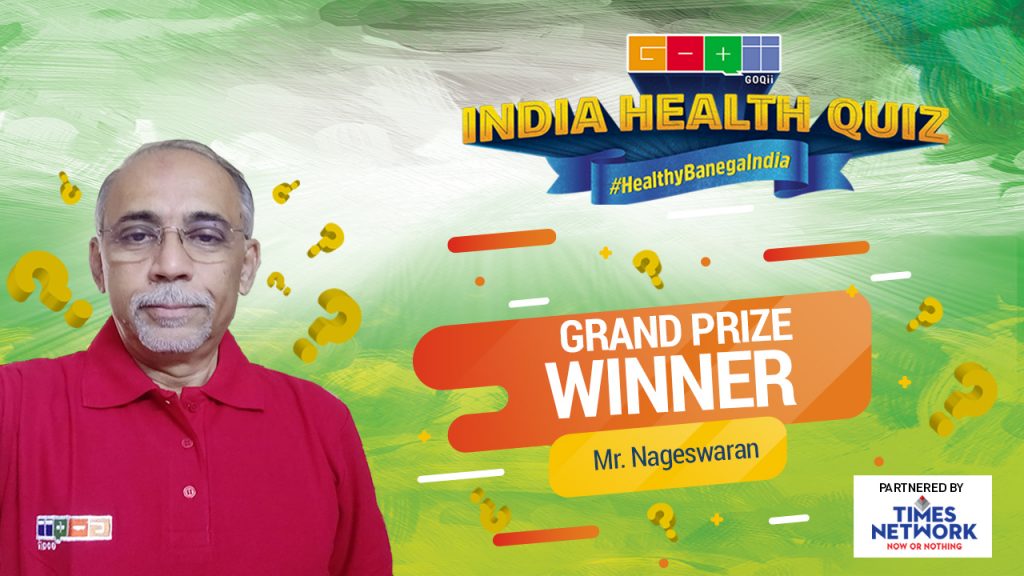 In a world plagued by fake health news and articles spread via the internet, the India Health Quiz launched by GOQii sought to educate the masses with the correct information in a quiz format which tested their knowledge. The idea was to bust myths and fake health news by getting the correct information from experts via GOQii Play and use that knowledge to play the quiz. Players could accumulate points and exchange them for prizes such as GOQii Trackers, Bags, Cell phones and a grand prize of Rs. 5 lakh which was bagged by Mr. Nageswaran!

With so much of competition, difficult questions and obstacles, how did Mr. Nageswaran manage to claim the grand prize? Let’s find out!

Being a GOQii Player for about 3 years, Mr. Nageswaran has been quite active on the GOQii App. When the India Health Quiz was announced, he got curious! He knew he wanted to participate. Furthermore, he wanted to increase his awareness about various things related to fitness and nutrition. This was the right platform for him to do that!

If you’re wondering, “Did he have a strategy?” He didn’t plan anything. He just went out and played the quizzes with the aim of getting as many correct answers as possible in a collective effort with his wife. His initial thought was that he just wanted to play and see how far he can reach.

As the days progressed, he used to go back to previous quizzes and sharpen his knowledge. He found that some of the past questions had some relevance to the current ones. Towards the end, he knew almost all the answers without even looking at the options.

One of the boons he had by his side was that he never ran out of keys. How? Mr. Nageswaran is a regular at the GOQii Health Store. He says that most of his groceries come from the GOQii Health Store. In fact, he purchased some product or the other every day. This helped him accumulate keys and use them to participate in the IHQ.

As for lives, he had only managed to invite 50 friends. He had retained this number till the last 10 days of IHQ. Towards the end, he referred more people and got his count up to 90. As a matter of fact, he did not need too many lives at later stages as he knew the answers to most questions. He was left with as many as 2000 lives!

At the start of IHQ, Mr. Nageswaran face a few technical glitches which reduced as the quiz progressed. He particularly points out that the technical team were always eager to help him with any issue he faced. Despite having faced glitches, he is of the opinion that an online quiz of such magnitude is bound to have glitches. Apart from this, he feels the questions were quite simple except a few technical ones which were very hard to figure out.

His Thoughts on the India Health Quiz

Mr. Nageswaran says it was a commendable effort on the part of GOQii to think of a unique and interesting way to impart knowledge to its users. He feels some of the concepts about health and nutrition might have gotten etched in the minds of users who played these quizzes regularly. For instance, he would have never known the food sources of various vitamins and minerals if it weren’t for the quiz.

He feels what started as a casual thing, later on became an addiction. He and his wife used to even participate in the quiz while working and trying their best not to miss any quiz. He feels it was definitely a success story for GOQii and a great learning experience for him.

All we can say now is Congratulations to Mr. Nageswaran and a big thank you to everyone who participated! Keep your eyes peeled for the next challenge!

They say being a housewife is a full time job, and quite rightly so. As one among many, 52 year old Sangeeta Jajodia from Mumbai, led a very busy life. Her routine revolved around tending to the needs and demands of her grown up children, cooking, cleaning and … END_OF_DOCUMENT_TOKEN_TO_BE_REPLACED