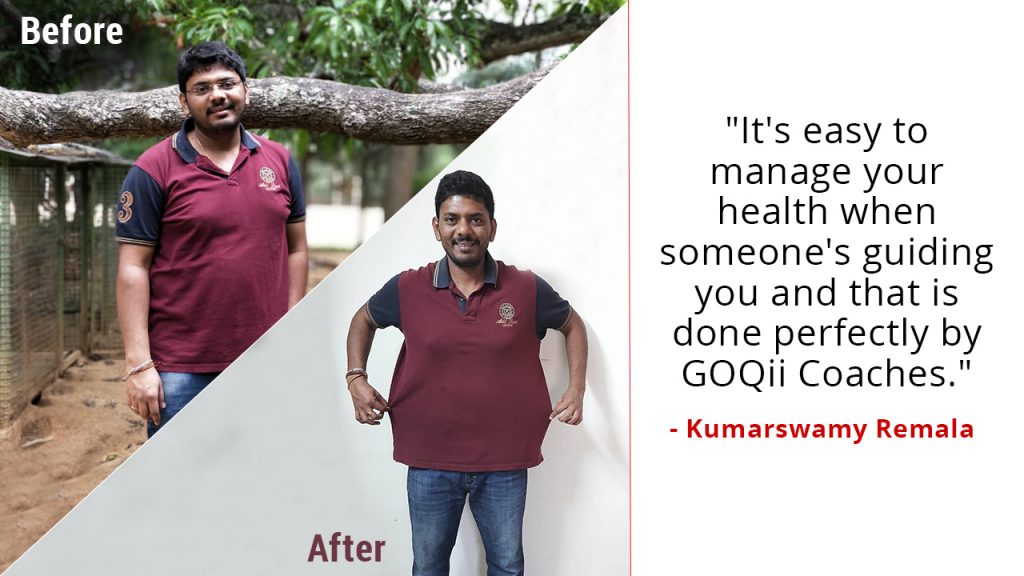 What motivates you to push past your limits and achieve your goals? What drives you to stay active mile after mile? Is it determination? Is it a poster you read that charged you up? There may be many reasons such as building confidence, wanting to be there for your family and friends, the desire to live longer and healthier – but as we all know, motivation runs out as quickly as it comes. Determination without the right guidance is meaningless. But with the right guidance, faith in your coach, patience and persistence, anything is achievable. Don’t believe us? Ask our player Kumarswamy Remala.

Kumarswamy Remala is a 33 year old working professional from Bangalore. Since childhood, he has been a complete foodie. However, to balance it out, he used to be very active. Cricket and badminton were his favorite in college. He even kept himself active intermittently after joining a workplace. In December 2015, he suffered a back injury which put a halt to all his physical activities for a while.

To add to this, he worked in rotational shifts which moved from morning shifts to late night shifts. This worsened his eating habits as pizzas, junk food and alcohol became a staple. His sweet tooth along with a penchant for trying different recipes added to his weight gain. He went from 80kg to slowly accumulating another 20-24kg over a period of time.

Motivation to Change and Joining GOQii

His health began taking a turn for the worse. He knew he had to change but the real motivation came through when his child was born in 2017. Kumarswamy Remala realized that he could not hold his child for a long time due to his back pain or even play with him due to his weight issues. This made him feel quite unhappy about himself and he finally decided to do something about it. He did not want to miss giving a 100% to his child. It was in 2019, approximately 6 months ago that one of his colleagues introduced him to GOQii.

Kumarswamy Remala Turns His Lifestyle Around!

After coming onboard GOQii, he began to strictly adhere to the habits set by his coach. His changes included:

Currently, Kumarswamy Remala weights 84kg. That’s a reduction of 16kg in a span of 6 months with GOQii. He says he feels really good about himself for having achieved his goal. He is able to concentrate on work better than before. In fact, he has begun pursuing his passion for badminton again as and when time permits and also enjoys spending time with his family like he couldn’t before!

He is thankful to his GOQii Coach for the inputs shared on portion control, suggestions and tips on how to eat healthy during his night shift and for sharing healthy recipes which appease the chef in him. He interacts with his coach regularly and logs his activities without fail every day. He purchases a lot of products from the GOQii Health Store, in fact, he purchases half his groceries from here. He has subscribed to GOQii Play coaches like Tufail Qureshi, Ronak Gajjar and Bhumika Uniyal for a mix of fitness and yoga.

In closing, he says that it is easy to manage your health when you have somebody guiding you at every step. He says this job is done extremely well by GOQii and all you need to do is have faith in your Coach, patience for results and be persistent in your efforts to achieve your goals!

We hope this story inspires you to get off that couch, Level Up and Get Active! Do leave your thoughts in the comments below.

Have you ever suffered from a cold or fever and thought to yourself that you can manage this? In fact, there’s a good chance that with some medication and rest, the symptoms of a cold or fever have subsided. But, when you deal with issues such as Diabetes and … END_OF_DOCUMENT_TOKEN_TO_BE_REPLACED