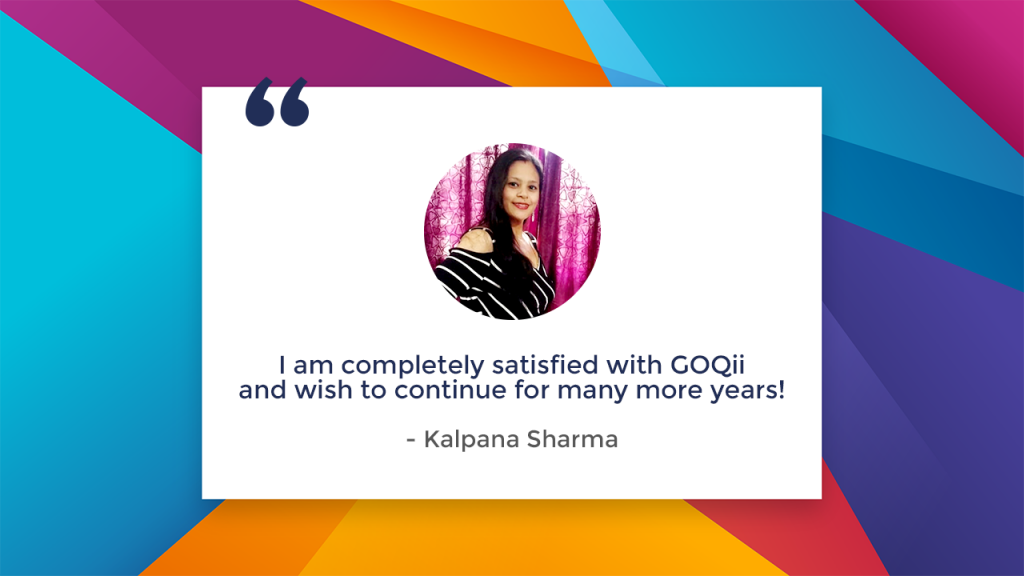 Household chores can be quite healthy for you as they help you stay active! But like any journey towards good health, you have to support your activity with proper nutrition, sleep and manage stress as well. In most cases, individuals find it difficult to do so. This may be due to fatigue, lack of motivation or proper guidance. So what happens when you get the motivation you need with proper guidance? Let’s look at how they helped Kalpana Sharma!

Kalpana Sharma, a 36-year-old housewife residing in Pune is married with 2 children, aged 9 and 3 years respectively. Prior to joining GOQii, she had no time or inclination to workout or manage her diet. She was too occupied with household chores and taking care of her family.

Apart from being inactive, she suffered from high acidity for almost 4 years due to unhealthy eating habits. She also had breathing problems due to weight issues. The meals prepared in her household were cooked in ghee and oil. The consumption of sweets was high as well.

Determination to Start a Healthier Lifestyle

During her second pregnancy, Kalpana Sharma weighed around 96kg. This was a frightening experience for her as she did not want to cross the 100kg mark. She knew she needed a drastic change. After her delivery in 2018, her husband gave her a GOQii tracker with a 3 month subscription as an anniversary gift.

Her husband motivated her to lose weight and get fit. Her health goal was to lose weight and get rid of acidity. Her GOQii Coach suggested she eats Fenugreek seeds that were soaked overnight, first thing the next morning. She had to include salads before lunch in order to reduce the portion size of her meal.

For dinner, she avoided carbs and switched to paneer and salads. She was asked to avoid sugar in her tea and coffee and eat sweets occasionally. On the exercise front, Kalpana began cardio for 30 minutes for 5 days a week. She also began walking after dinner. Her GOQii Coach shared some workout videos with her which she used to follow.

Under her 3 month subscription, Kalpana Sharma lost 3kg. This motivated her to extend her membership to 12 months. She weighed 88kg then and further reduced her weight to 71kg. Seeing the speed of her results, she wishes to lose another 3-4kg.

As per her GOQii Coach, she has been as consistent as possible with her habits. She switched to healthier alternatives while cooking. For instance, she began using jaggery instead of sugar. Any cakes or cookies she baked were made of whole wheat flour and jaggery.

Due to her healthy cooking methods, Kalpana has been able to improve the health of her entire family! She has even begun innovating her own cooking methods by opting for low fat alternatives.

In addition to all of this, she has also started strength training as suggested by her GOQii Coach. She now does cardio, abs and weights on alternate days. Kalpana ensures that she sets aside time for exercise no matter how hectic her routine is. She is dedicated to the extent that sometimes she is called ‘crazy’ by her family members!

3 months back, she was diagnosed with varicose veins and her doctor advised her to not stand for long periods of time and to ensure that she doesn’t gain weight. Instead of being defeated, this has only strengthened her motivation to exercise and lose more weight!

Kalpana is quite active on the GOQii App and has explored a few snacking options from the GOQii Health Store. She finds them very tasty and healthy. When asked what she felt about GOQii, she said that it has transformed her and she is completely satisfied with GOQii and wishes to continue for many more years!

We wish Kalpana Sharma the best in her ongoing journey towards a healthier life. Did you find Kalpana Sharma’s story of determination inspiring? Drop a comment below and let us know what you feel!

Sandeep Gupta is 55 years old and is a businessman who renders services to the Ministry of Defense. He was overweight at 86kg and suffered a lot from gastric and chest pain. This continued for 5 years and he was on medication as well. However, in the past 6 … END_OF_DOCUMENT_TOKEN_TO_BE_REPLACED