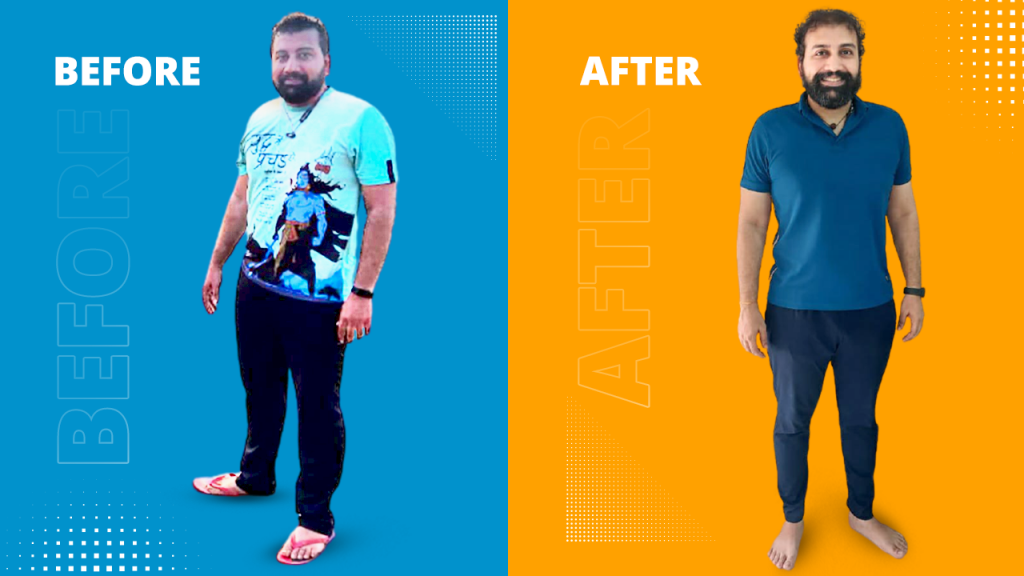 Living a healthy life is all about maintaining balance. This includes exercise, nutrition, sleep and maintaining good mental & emotional health as well. If you’ve been hitting the gym or doing your daily walks or even eating the food you are supposed to without achieving results, there might be something that is amiss. That’s where having a coach who can guide and motivate you, really helps! To let you know how, here’s the journey of our Player Bharat Rao who went from being healthy to healthier, with help from his GOQii Coach.

Bharat Rao works as a Senior Technical Lead in an IT Company. His work requires him to travel frequently. Till June 2019, his weight was 85kg but after a year, it shot up to 103kg. He did keep himself active despite his daily routine by playing badminton with a friend who eventually introduced him to GOQii.

GOQii’s concept of Karma, personalized coaching and a tracker to monitor his step counts along with an integrated app really intrigued Bharat Rao. He decided that investing his time in GOQii would be worth his while.

After they got on call, his GOQii Coach included changes such as correcting his food habits, introducing more fruits and vegetables while reducing junk food, tea and coffee in take as well as putting a stop to late dinners. His workout included basic cardio and strength training at home. He was asked to avoid using his cellphone late at night in hopes to correct his sleep pattern.

Within the first month itself, Bharat Rao felt healthy! He was able to cope with the changes thanks to him being active before and was able to follow through with discipline. It got a bit challenging to incorporate these changes with his frequent traveling, but his GOQii Coach was able to help him adjust his schedule that included walking 6-7k steps a day, drinking cinnamon honey water in the morning before he began his journey. They were able to adjust eating habits too thanks to portion control. If regular walking didn’t cut it for him, he switched to GOQii Play in the mornings.

With the outbreak of COVID-19 and the subsequent lockdown in 2020, he was quite worried about how he would keep up his routine. With some advice from his GOQii Coach, he began walking more indoors, meditating for 15 mins in the morning and 45 mins at night. He also began practicing yoga. He says, “Meditating in the morning and evening has actually helped me think positively, keeping all the negativity around the coronavirus and the economic situation at bay. I feel more grounded and peaceful even while sitting at home.”

At the end of 2020, his weight reduced to 85kg and he felt he was much healthier than before. He says that this journey was all about him repeating a routine over and over again, not giving up, staying disciplined and having good people push him further in a healthy way! He says that the 3 secrets to his transformation were consistency, discipline and dedication!

What Does Bharat Rao Think About GOQii?

Bharat Rao says that his coaches have constantly motivated him to be disciplined and consistent, sharing inputs from time to time about what he should eat, what exercises he should do and what he shouldn’t do. Most importantly, they have structured his routine for the days he travels. He is thankful to GOQii for helping him achieve his goal.

What Does Coach Sudrita Roy Choudhury Have To Say About Bharat’s Journey?

Bharat was very committed to his health goal when he came on board. He was always very sincere from the beginning and never missed his updates. Along with walking, we have also included yoga and core exercises to his routine. We have always discussed portion size which he has maintained and has got visible results! Deep breathing helped him reduce stress – one of the important parameters to maintain a healthy lifestyle. I am convinced he will reach his goal soon. He is very active and promptly maintains two way communication via chats and calls which motivates me as well.

Did this story inspire you? Want more? Check out Healthy Reads! If you want to make a positive lifestyle change just like Bharat Rao has, sign up for personalized coaching to get a coach as awesome as Sudrita Roy Choudhury: https://goqiiapp.page.link/wssu

Does being sedentary after retirement sound familiar to you? Could be you, a loved one or someone you know. J Ravichandran, a 63 year old retired CA from Chennai, experienced the same. As a CA, his work involved a lot of traveling - which kept him active. … END_OF_DOCUMENT_TOKEN_TO_BE_REPLACED