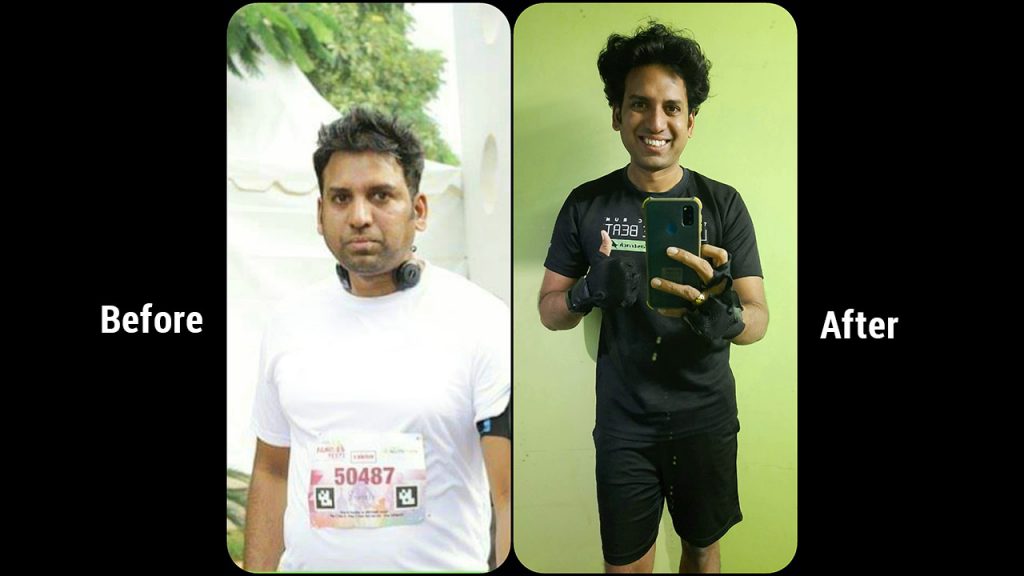 Does your work revolve around traveling and leaves you with little time to focus on your health? Sandeep Vasant, a marketing professional from Bengaluru had the exact same issue till he decided that it was time to change.

In 2016, Sandeep Vasant weighed around 89kg, his BMI was hovering around the overweight to obese category and he knew he had to change. His opportunity came when he won a GOQii band as a part of a contest.

The concept of personalized coaching, a band to track his daily step count and an integrated app –  all of this intrigued him and he decided to invest his time in the GOQii model. His coach guided him on how they would go about his goal to lose weight. These changes included:

Within the first 10 days itself, Sandeep Vasant began seeing changes in himself which motivated him to be more consistent.

The challenge came when he had to incorporate these changes to his frequent traveling. His coach recommended that he pack his workout gear even while traveling so he can go for runs and workout in his hotel room as well. For food, he had to settle with what was available albeit, he had to choose healthy and maintain portion control. If he got bored with gym workouts, he switched his attention to GOQii Play coaches in the morning.

At the start of 2018, he had already dropped 10 kgs. If 2017 was about changing food patterns and beginning exercises, 2018 became more about his interest in marathons. He started participating in 5k runs which initially took him 45 mins to complete. He wanted to improve his timing and start training more for marathons. He decided to participate in at least one marathon each month. Turns out, he won a few medals in the course of his journey as well. He draws his inspiration to workout everyday looking at the medals he won at those events.

When the country went into lockdown, like others, he was worried how he’d keep up with his exercise routine. He did not want to squander all the hard work he had put in till now. He decided to increase his workout time and started participating in evening Zumba sessions on GOQii Play.

He began practicing yoga – something which never interested him before but was the need of the hour. Now, he is a regular at Ronak Gajjar’s meditation sessions on GOQii Play. He says, “Meditating along with Ronak has actually helped me think positively, keeping all the negativity around the coronavirus and the economic situation at bay. I feel more grounded and peaceful even while sitting at home.”

During the past 3 months, he has not gained weight but in fact, he has lost 4kg more and now weighs 75kg. His goal is to further drop 2kg which will bring him in the normal BMI range.

What Does Sandeep Vasant Think About GOQii?

Sandeep says his coaches have constantly motivated him to be consistent, shared inputs from time to time on what he should and should not eat. Most importantly, they have structured his routine for the days he travels. He is thankful to GOQii for helping him achieve his goal.

He says that the 3 secrets to his transformation were consistency, discipline and dedication! As of now, Sandeep is making great progress. What about you? Subscribe to GOQii now and make a positive lifestyle change!

For more stories on transformation and lifestyle change, check out user stories on Healthy Reads.

Does being sedentary after retirement sound familiar to you? Could be you, a loved one or someone you know. J Ravichandran, a 63 year old retired CA from Chennai, experienced the same. As a CA, his work involved a lot of traveling - which kept him active. … END_OF_DOCUMENT_TOKEN_TO_BE_REPLACED