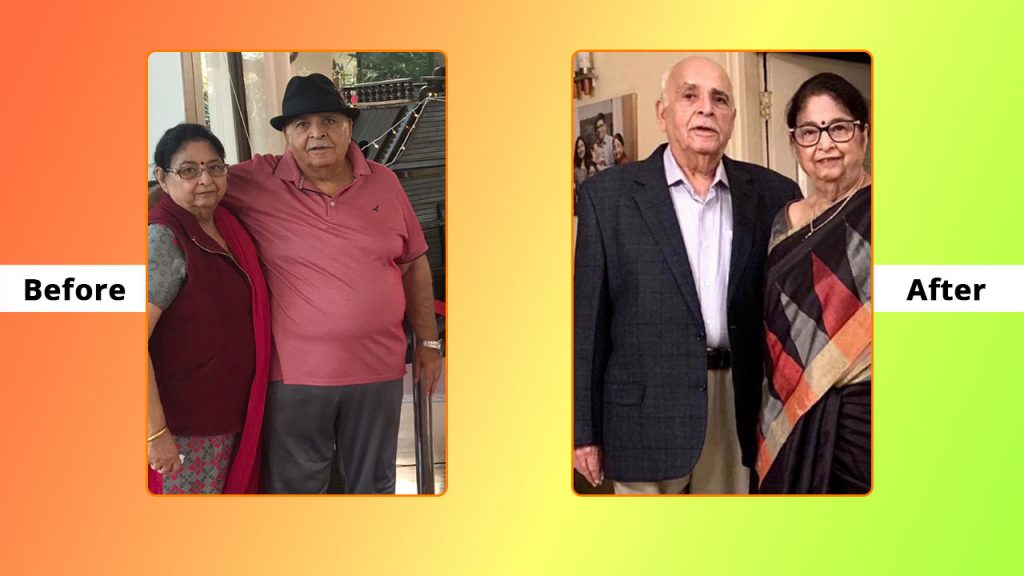 As we age, we are often unable to do the things we could before. Mobility issues as a result of old age often become an excuse for older adults to not get active. But we’re here to tell you that age is just a number if you have the will, determination and proper guidance towards living an active and healthy lifestyle. Don’t believe us? Let our player, Retired Army Col Ravi Minocha, tell you how he lost weight and beat his mobility issues with sheer willpower and the right guidance from GOQii! Recently, he spoke to our Founder & CEO Vishal Gondal. You can watch their conversation here:

“I was very active as an army officer. I was in the unit of Core of Electronics as a mechanical engineer. I retired from the army in 1994,” he says. “I always had a tendency to put on weight. After retirement, I joined the private sector and worked there for 10 years. In 2004, I stopped working and had developed arthritis issues in the knee due to which my mobility reduced.

Doctors suggested surgery as a solution, other than that, it was to pop some painkillers and go in for physiotherapy. I did not want to take pain killers and by now, my mobility had reduced a great deal. I could barely walk for 10 minutes. I reached a stage where I was shy of standing on a weighing scale as I had reached the weight of 99kg and had a waistline of about 48-49 inches. In June 2017, on my birthday, my daughter Latika gifted me a GOQii Tracker and what intrigued me was the coaching aspect.”

Initially, Col Ravi Minocha struggled with losing weight and his son told him that he had to do something about controlling his weight. That’s when his health goal became to reduce weight. His ideal weight, as per his age and height was supposed to be around 76-77kg.

After getting onboard the GOQii Ecosystem, Col Ravi Minocha dedicatedly followed all the instructions given to him by his GOQii Coach. “My coach has been very accommodating,” he says. “She has only been motivating, never once discouraging. As for my bad habit of eating unhealthy, she directed me well towards healthy eating. We started small. I followed everything that my coach said religiously. I started enjoying the interactions with my coach. My coach had a lot to work on, including my unhealthy eating habits, my weight and also my mobility issues. So we started slowly.”

Within 3 months of being on GOQii, he started feeling the change and slowly his GOQii Coach revised the step count to 10K daily. His mobility issues persisted slightly even then but he realized it was getting better. The Coach also changed his eating habits by reducing his carb and sweets intake. He began eating millets, millet rotis – 8-10 meals in a week with millets, including salads. Controlled diet and exercises helped him improve his weight and with weight loss, his mobility improved.

Col Ravi Minocha Sees The Results of a Healthy Lifestyle

In 3 years, Col Ravi Minocha lost 22kg and his weight had reduced from 99kg to 77kg. His waist size has reduced from 49 inches to 38 inches now. Currently, he is working towards maintaining this weight which is ideal for his age and height. On an average, he completes around 12-13k steps.

In May, he took around 270km steps, which is equivalent to almost 7 marathons. He was quite chuffed looking at the data. He says that, “The GOQii App is very good and getting feedback is a very good thing.” Col Ravi Minocha has been renewing his subscription year after year and is extremely happy and thankful to his coach.

His daughter Latika stays in Singapore and is very happy to see her dad doing very well. She had gifted him a GOQii after her husband’s friend Jyotirmoy Saha, who also happens to be Vishal Gondal’s friend, suggested GOQii. She says, “What appealed to my dad was the personal coaching. We are all so proud of our dad and what he has achieved at his age. We all marvel at his will power and determination.  Even now, he calls and says how many steps he has completed. He has become a great influencer for all of us, including my mom.”

What Does His Coach Falguni Bhojak Have To Say?

For Col Ravi Minocha, the goal we were working on was reducing his weight and tummy fat. But the main concern was his knee discomfort due to OA, because of which he had mobility issues. Due to his Arthritis issues, his mobility was restricted and he was not able to walk at a stretch for more than 10-15 minutes.

Then we started working on knee discomfort as in, started anti-inflammatory food, started knee exercises, walking with short breaks in between. I also looked into his diet and asked him to log his food every day so I could know what he was eating and how we could bring about changes in that. He started having lukewarm lemon water, more fruits and salads as well as green veggies. We introduced Millets in his diet and he started having millet roti and millet dosa.

He was so consistent and disciplined in updating logs from the time he joined! Even when he travelled to visit his daughter in Singapore, he kept updating his logs and kept updating me about his habits. Gradually, his mobility became better and he was completing 7-8 k steps by going to walk 2 times a day. Gradually we increased the time and now he can walk for an hour without breaks and discomfort.

He had some constipation problems in between, so we started including soaked black raisins to his diet and that helped. When his hemoglobin had shot down, we began including iron-rich food to ensure he remained healthy.

Col. Minocha is consistent with his habits and follows whatever is told to him. He is extremely disciplined in following his routine. Consistency and discipline have helped him achieve his health goals. Infact, on 29 June, he updated me that his weight is now down to 76.5kg.

As you can see from Col Ravi Minocha’s journey, it is never too late to make a positive shift to a healthier lifestyle. What’s stopping you? Subscribe for personalized coaching now: https://goqiiapp.page.link/bsr

Imagine an event where each and every person has a unique tale to tell, despite having taken similar paths or adventures. Have you ever gone through it? We’re about to share the experience of Kamal Chandran, Group Head - HR at GOQii, who participated in the … END_OF_DOCUMENT_TOKEN_TO_BE_REPLACED