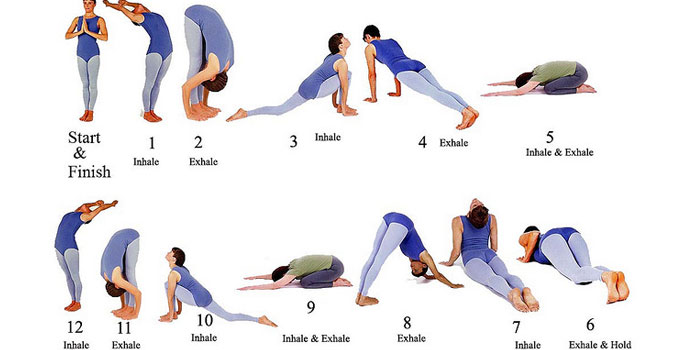 I have already mentioned about the benefits of Surya Namaskar in my previous blog and that it is yoga based exercise for overall personality development.  It helps to achieve balanced physical growth, toned body, balanced state of mind, concentration, alertness and memory development. One must complete 12 rounds with chanting of mantras.

Starting position is called ‘Sthiti’ where one will stand erect with a Namaskar Mudra as is shown in the 1st picture.

2 Breathe out slowly and bend forward. Allow your palm to touch the ground near your feet as shown in fig.2 .

4 Exhale and step back with left leg, you will go to plank pose keeping your entire body straight in one line as shown in fig 4

5 From plank pose go to Shashankasana. While putting knees on the floor breath in while going to final pose breath out as shown in fig 5

Breathe out and come back to starting position Stithi. This is one complete round of Surya Namaskar.

Repeat the same process and try to complete 12 rounds with Mantras.

With eight years of experience as a fitness and yoga trainer in India and UAE, Balwant Singha’s passion is fitness. A science graduate from Mumbai University, Balwant is armed with a fitness instructor’s certification from Nautilas Academy and a P G Diploma in Nutrition from Tulip International. After gaining a degree in Yoga from K J Somaiya in Mumbai, he is currently pursuing a Masters certification in Yoga from Nagpur University. Balwant says he is self-motivated and time and again pursues new skills and sets new targets for himself. No wonder that he is excited about joining GOQii where he can motivate people in changing their habits and help them walk the path of good lifestyle. He likes GOQii’s idea of a holistic program where people are working on their health and at the same time helping the needy as well. To stay fit, he practices traditional yoga and goes swimming.

What motivates you to push past your limits and achieve your goals? What drives you to stay active mile after mile? Is it determination? Is it a poster you read that charged you up? There may be many reasons such as building confidence, wanting to be there for … END_OF_DOCUMENT_TOKEN_TO_BE_REPLACED